Let there be light: Handwritten draft of King James Bible reveals the secrets of its creation

Every great work of literature is a product of meticulous editing and revision. The King James is no exception 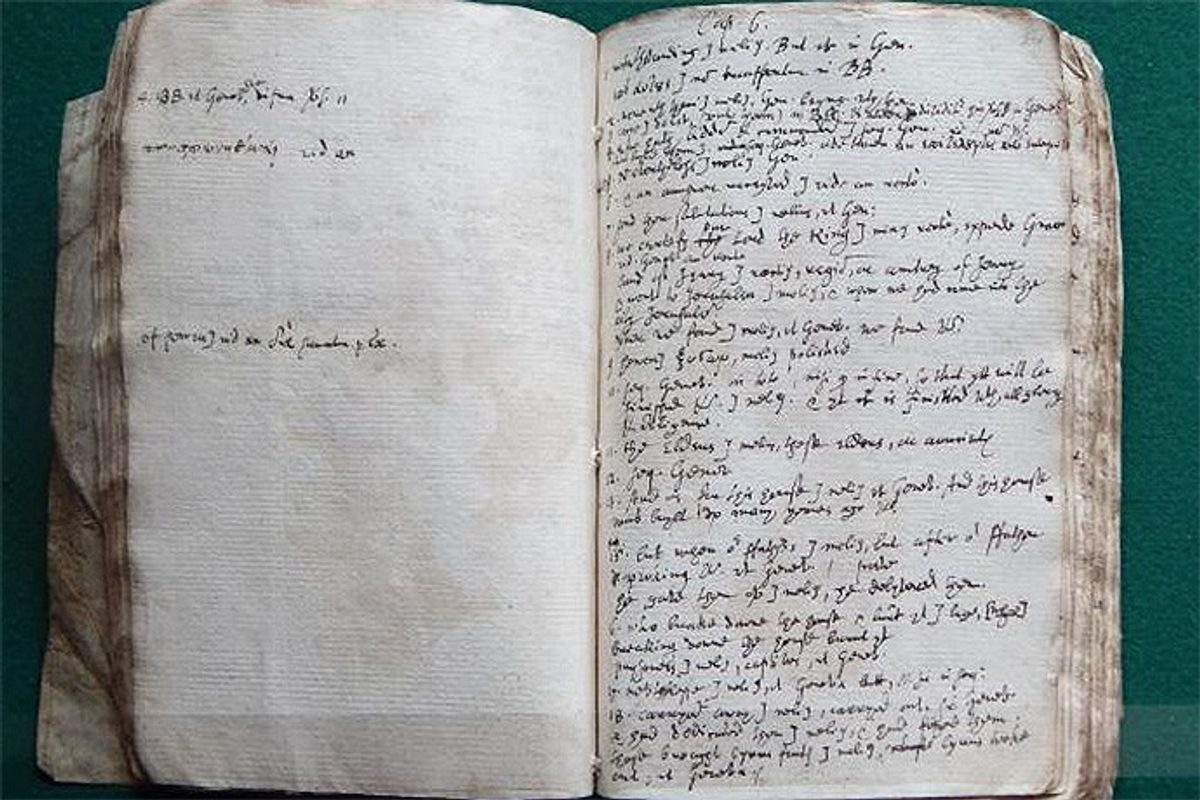 The King James Bible may well be the greatest work of literature ever written by committee—and now we know a bit more about the collaboration that produced it.

Jeffrey Allen Miller, an English professor at Montclair State University conducting research at Cambridge announced a remarkable discovery last week: “in the archives of Sidney Sussex College there survives now the earliest known draft of any part of the King James Bible, unmistakably in the hand of one of the King James translators.”

The manuscript was written by Samuel Ward, who was 32 when he became one of seven men at Cambridge charged with translating the biblical Apocrypha for inclusion in the edition, and who would eventually became master of Sidney Sussex College until his death in 1643. The material in the manuscript discovered by Miller covers apocryphal books known as Esdras and Wisdom, and it seems to indicate that the process of translation at Cambridge worked differently from what we thought we knew about it. It had long been assumed that the six separate teams, or companies, of translators who were based across Cambridge, Oxford, and London which had been assigned individual sections of the Bible to work on operated more collaboratively on certain sections than individually.

But Ward’s draft seems to indicate that individuals in each company were assigned smaller portions of the biblical sections that that company oversaw, making the whole Bible more of a patchwork of individual labor than a collaborative whole. As Miller explained last week in TLS, “Not only does it profoundly complicate the notion that members of a given company necessarily worked on the translation of each book together as a team; it forces us to think harder about the extent to which all the companies necessarily set about their work in the same or even a similar way.”

The translation was convened by orders of James I (from whom it gets its name) in 1604 and printed in 1611. As a work compiled by committee, the 47 men who worked on the translation had the unenviable task of producing a text which straddled the difficult theological lines in a nation profoundly divided by sectarianism.

Though a committed Protestant (who wrote works denouncing both witchcraft and tobacco) James I was not particularly enamored with the Puritan fringe in England. Though all of the translators were confirmed members of the Church of England, the committee demonstrated the theological diversity in England at the time, ranging from Ward, a Puritan who was a member of the Second Cambridge Company, to the master rhetorician of High Church oratory Launcelot Andrews who worked in the First Westminster Company at London (and had a hand in the work on Genesis to Second Kings).

Though the King James Version would ultimately become the most celebrated English translation of the Bible, the scholars working on it had ample precedent, with eight translations preceding theirs. The most notable versions in sixteenth century England were the Bishop’s and the Geneva Bibles. As is perhaps obvious from their names, the language and the textual glosses in the first tended toward an episcopal perspective and the later (completed by Protestant exiles in Switzerland escaping the persecutions of the Catholic Queen Mary) was explicitly Calvinist.

The King James companies worked at integrating the orientations of these two editions, but they also had the profound literary example of William Tyndale, who finished the first complete English translation of the New Testament (an accomplishment which led to his execution in 1536). A literary genius whose influence on the language is arguably second only to Shakespeare’s, Tyndale lent the King James translators such phrases as “lead us not into temptation but deliver us from evil,” “eat, drink and be merry,” “my brother’s keeper,” “it came to pass,” “the salt of the earth,” “the signs of the times”—and perhaps most sublimely, “let there be light,” among many others.

Tyndale’s verbal power was so great that even the Catholic translators of the Douay-Rheims Bible (completed by English Catholic exiles on the continent and actually first printed twenty nine years before the King James Version) borrowed heavily from Tyndale—which didn’t prevent the ornate, Latinate, and cumbersomely multisyllabic Douay-Rheims from sounding ponderous compared to the King James. Though Tyndale may have supplied much of the material for the King James, it was men like Ward and his fellow translators who were able to not only make a more accurate Bible, but who edited and revised previous attempts, generating the unmistakable rhetorical power of language we call “biblical.”

The King James is one of the great victories in our language. The translation uses the rhetorical power of Anglo-Saxon understatement married to the principles of parallelism which defined Hebrew prosody—which was only beginning to be understood by Christian scholars.

When we think of biblical language as straight-forward, simple, direct, and powerful, we have the translators of the King James to thank. In their task they believed they were translating the very speech of God into the vernacular—thus inventing the plain language that is the hallmark of British and American literature.

The echoes of the translators can be heard in writers from George Herbert, John Bunyan, and John Milton, to Herman Melville, Walt Whitman, Emily Dickinson, Langston Hughes, and William Faulkner. In our day, think of Toni Morrison, or Marilynne Robinson. Indeed this biblically-inflected plain speech can be discerned in everything from Jefferson’s Declaration of Independence to Lincoln’s Gettysburg Address.

The brilliance of its language is that it is so simple and yet never simplistic, in keeping with Tyndale’s wish that one day the young boy ploughing the fields would be as knowledgeable as the Pope.

With an influence so profound, it’s not surprising that some, such as the members of the fundamentalist “King James Only” movement have endowed the committee itself with divine powers.

And yet Miller’s discovery has reminded us of something crucial: no matter how immaculate it may be, writing is always a process of revising, cutting, and rewriting. Professor Miller emphasized this when he said that the find “really testifies to the human element of this kind of great undertaking.”

That the translators were remarkable scholars is not to be doubted, but in reading Samuel Ward’s handwritten draft we should remember that they need not be seen as divinely inspired: they were remarkable editors, and that is impressive enough.