The clown show continues: Jeb Bush might be down to his very last chance

With tonight's debate a make-or-break event for some hopefuls, a candidate-by-candidate breakdown of what to expect 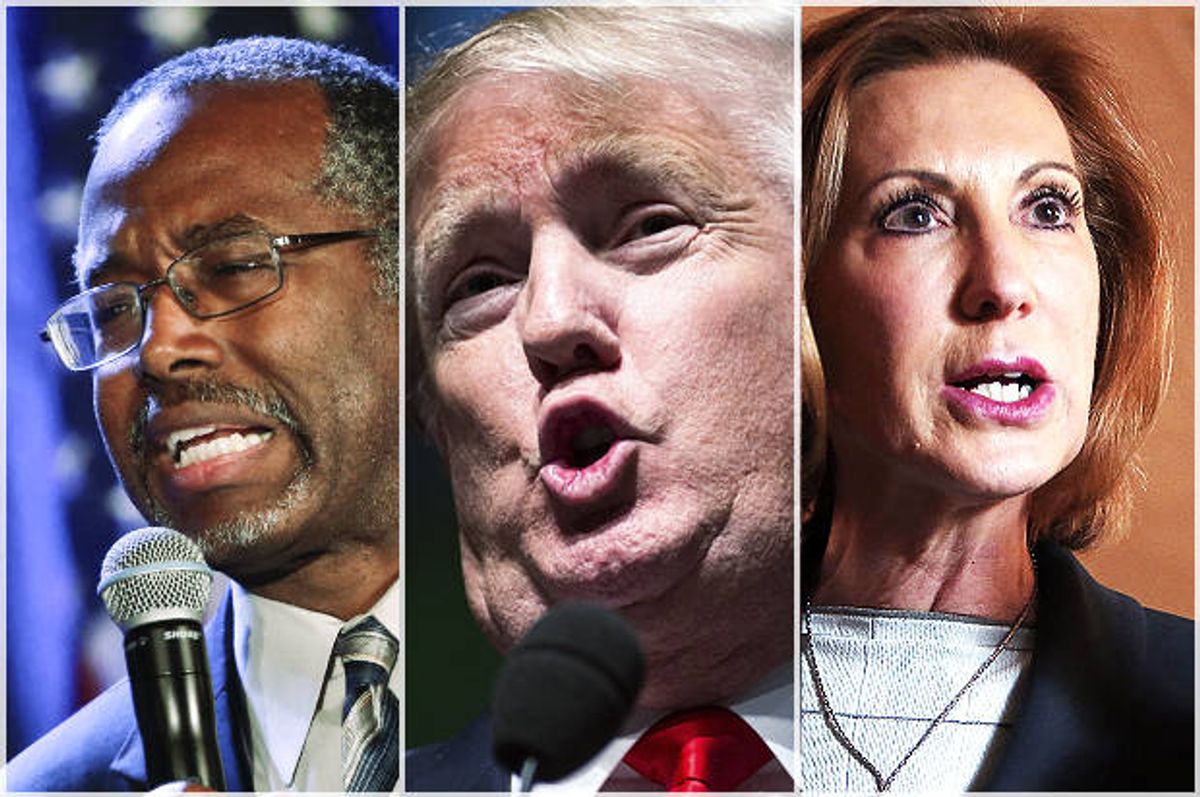 The third Republican presidential debate airs tonight at 8 p.m. on CNBC. To help summarize where the overall race is as well as what’s at stake tonight, here’s a candidate-by-candidate breakdown. I’m deliberately ignoring the junior varsity debate, which airs at 6 p.m. and features Bobby Jindal, Rick Santorum, George Pataki and Lindsey Graham. None of these candidates matter and the undercard event is of interest to no one but the friends and family of the participants.

Although the Donald has lost his national lead to Ben Carson in the latest CBS/NYT poll, this is still Trump’s race to lose. He’s well-positioned in the early primary states (with the exception of Iowa) and he’s proven he has real staying power. However, I expect Donald to come out swinging tonight. He can’t afford to let a “loser” like Carson torpedo his efforts to make America great again. Carson, like Bush, is notoriously low energy, and Trump will try to exploit that tonight. The theme of the debate is “Your Money, Your Vote,” and the focus is on job growth, taxes, technology and the economy. Because Trump turned his unearned (and substantial) trust fund into a fortune, people assume he knows about these things, so he ought to perform well. He’ll have plenty of opportunities to remind people that he’s rich, for instance, and Republicans love that. Bottom line: Trump’s whole shtick is that he’s a “winner,” and he’s dominated the race for several months now. But his lead is shrinking and he suddenly appears vulnerable. Candidates looking to break through will pounce on Trump tonight, as they did in the previous debate. How he responds to that will determine how well he does tonight.

Carson is in an interesting position tonight. For several months he’s trailed Trump in the polls, but he’s narrowed the gap and in some cases eclipsed Trump completely. Carson’s nice guy routine plays better when he’s not leading the race. Now that he’s a frontrunner, Carson is more likely to be targeted by the other candidates. It will be interesting to see how he handles these attacks. Carson’s strategy of sounding informed without actually being informed has worked well so far. I keep waiting for Republican voters to notice that Carson doesn’t know what he’s talking about, but it’s clear by now that this isn’t a liability in the GOP. But Carson has opened himself up to criticism in recent weeks. On Meet the Press, for example, he equated women who have abortions to slaveholders. He’ll have to defend this and other outlandish remarks tonight. I’m not sure he’ll be able to pirouette around these gaffes without embarrassing himself further, but we’ll have to wait and see.

Jeb has the most at stake tonight. His campaign is in a free-fall and everyone knows it. No one on that stage needs a strong night more than Jeb. His donors are panicking as he continues to slide in all the polls. On Monday, Jeb held a meeting with donors at a Texas retreat, where he solicited the help of his father and brother to reassure his financiers that he’s still a good investment. The problem is that he isn’t a good investment, and everyone not named Bush can see that. Now that Jeb is losing to Rubio, the junior Senator from Florida, it’s getting hard for him to sell himself as a legitimate contender. If Jeb wants to resuscitate his campaign, he’ll have to be aggressive tonight. That seems unlikely, however. At the end of the day, Bush’s banality is too obvious to overcome. Republican voters simply don’t find him interesting, and it will be hard to change that in one night.

Tonight is an opportunity for Rubio. Having surpassed Bush in most of the polls, Rubio has become the darling of the establishment, the candidate insiders prefer over Trump and Carson. For the most part, Rubio has remained civil, choosing not to attack the other candidates directly. But his strategy appears to be shifting. He recently went after Trump on CNN, saying Trump “has not proven an understanding of these issues or the preparation necessary to be commander-in-chief of the most powerful military force in the world.” Rubio did reasonably well in the first two debates. If that trend continues tonight, he’ll solidify himself as the establishment alternative to Trump.

Fortunately, it appears Fiorina’s fifteen minutes are up. She got a bump in the polls after the first two debates, but that was temporary. She’s now behind Bush in most of the polls, and that’s likely where she’ll stay. Fiorina’s campaign was always a house of cards. Her only asset is her ability to lie with perfect conviction. She performed well in the first two debates for purely stylistic reasons, but that’s about it. Now that she’s been exposed, her campaign has become an afterthought. I expect her to do well tonight because her fact-free approach works in a debate format, but that won’t change the broader dynamics of the race.

Yes, Rand Paul is still running for president. And I have no idea why. Paul’s only chance in the Republican race was to excite the libertarian wing of the party, but he’s failed to do that. Paul never got any traction in the polls, and his non-interventionist libertarianism has yet to resonate with Republican voters. Apparently Paul plans to filibuster the new debt ceiling bill, which is a nice publicity stunt and something I expect him to champion tonight, but I doubt that will impress anyone watching tonight.

Cruz remains a fascinating figure in this race. I’ve called him objectively unlikable, and I stand by that, but he’s impossible to ignore. His flair for the dramatic has kept him in the headlines and his ability to appeal to evangelicals and Tea Party supporters means he’s not going anywhere anytime soon. Cruz’s strategy has remained the same: pander to his religious base and wait for Trump and Carson to implode. Obviously Trump and Carson are still in the race, but Cruz is convinced he’ll get the majority of their supporters once they drop out. Tonight I expect him to play it safe. He’ll perform a few soliloquies and hope the other candidates attack Trump and Carson.

Huckabee’s role in this race remains unclear. He’s not going to win, and he knows it. At this point, there’s no reason for him to run other than for purposes of self-promotion. I don’t know if Huckabee is angling for another TV show or just selling books, but he’s obviously not in this to become president. I expect him to do what he’s done at the last two debates: make a show of his religious lunacy while trying to be charming at the same time.

Kasich is, in my view, one of the more interesting candidates in this race. In the first two debates, he was the sensible, moderate guy. He resisted the urge to attack the other candidates, choosing instead to emphasize his centrist credentials. Lately, however, he’s become more aggressive. “I’ve about had it with these people,” Kasich said at a rally in Ohio recently. “We got one candidate that says we ought to abolish Medicaid and Medicare. You ever heard of anything so crazy as that? Telling our people in this country who are seniors, who are about to be seniors that we’re going to abolish Medicaid and Medicare?” This signals a shift in Kasich’s approach, and I expect that will continue tonight.

For a brief moment in time, Christie was a legitimate contender in this race. He isn’t any longer. He’s currently in ninth place in most of the polls and he has something like $1.4 million in his campaign war chest. Christie is just about out of time. He desperately needs a strong performance tonight. Christie’s tough guy persona was always his greatest asset, but Trump has stolen his thunder. This may be Christie’s last chance to break through, so I expect him to go right after Trump and the other frontrunners tonight.