U.N. condemns the Saudi coalition after its airstrikes destroy another MSF hospital, weeks after shelling a wedding 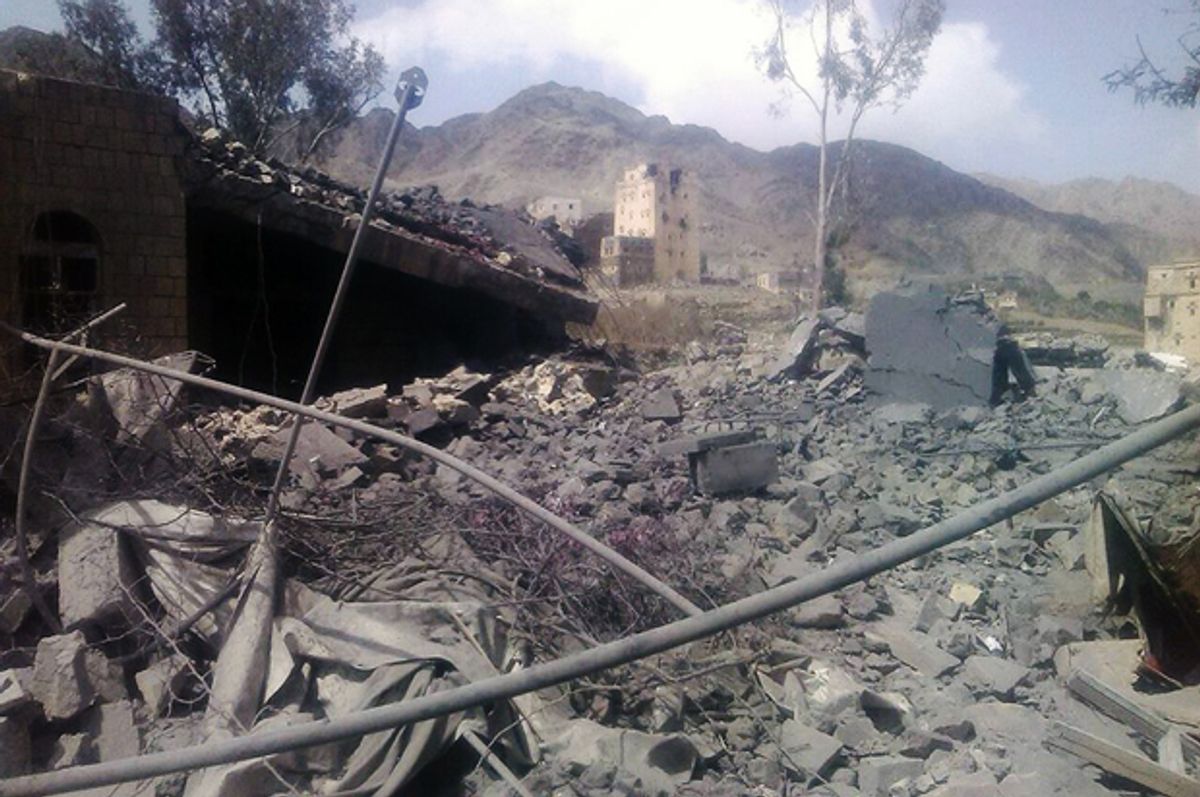 Weddings, Oxfam aid warehouses, residential neighborhoods -- now hospitals can be added to the list of civilian areas bombed in the Saudi-led, U.S.-backed war in Yemen.

A hospital run by international aid group Doctors Without Borders (referred to internationally in French as Medecins Sans Frontières, MSF) in Yemen was bombed on Monday. MSF says it recognized the planes that bombed it as those belonging to the Saudi-led coalition. The coalition denied attacking the hospital, but the U.N. verified that Saudi airstrikes were responsible.

No one was killed in the shelling, but, according to the U.N., several people were injured and the medical facility was razed to the ground. The aid organization also made clear that its "hospital's GPS coordinates were regularly shared with the Saudi-led coalition, and the roof of the facility was clearly identified with the MSF logo," yet it was still shelled for two hours.

Hassan Boucenine, MSF head of mission in Yemen, remarked "This attack is another illustration of a complete disregard for civilians in Yemen, where bombings have become a daily routine."

U.N. Secretary-General Ban Ki-moon "condemned" the attack. He implied that the attack, if purposeful, was a war crime, stressing that "hospitals and medical personnel are explicitly protected under international humanitarian law."

"With the hospital destroyed, at least 200,000 people now have no access to lifesaving medical care," MSF warned. It was the only functional hospital in Yemen's Haydan district.

Just weeks before the attack, on Oct. 3, a U.S.-led NATO coalition bombed another MSF hospital, this time in Kunduz, Afghanistan, in what MSF called a "war crime." Three weeks later, the death toll was still rising. At least 30 people were killed in the shelling, including 10 patients, 13 staff, and 7 unidentified bodies.

The U.S. military's story behind the attack changed at least five times, ranging from denial to reluctant admittance to explicit justification. As in the attack on its Yemeni hospital, MSF made clear that it provided the U.S. and Afghan governments with its coordinates many times.

Like the Yemeni MSF hospital, the Kunduz medical facility was the only large hospital in the northeastern region of Afghanistan. Now, hundreds of thousands of civilians living in war zones in Yemen's Haydan district and Afghanistan's Kunduz province are left without access to medical care.

The MSF hospital is by no means the only civilian area bombed by the Saudi-led coalition. For over half a year, the U.S. has firmly backed a coalition of Middle Eastern nations and militants loyal to President Abd Rabbuh Mansur Hadi, led by Saudi Arabia. The coalition, which numerous human rights organizations have accused of committing egregious violations of international humanitarian law, is fighting against Houthi rebels and militants loyal to former President Ali Abdullah Saleh, some of whom have received weapons from Iran.

On Oct. 8, the Saudi-led coalition bombed a wedding in Yemen, killing at least 47 civilians and injuring 35 more. Just 10 days before, on Sep. 28, the coalition shelled another Yemeni wedding, killing 131 civilians, including at least 80 women.

U.N. Emergency Relief Coordinator Stephen O’Brien recalled being "deeply disturbed" by the bombing of the second wedding. The top U.N. humanitarian official noted that "95 percent of the Yemeni people killed or injured by explosive weapons in towns or cities were civilians, according to a recent report, and more than half of all the air strikes occurred in towns or cities, often in densely populated areas, resulting in very high numbers of civilian casualties."

More than 5,000 people in Yemen have been killed in the war. On average, 30 people have been killed every single day in Yemen for over seven months. According to the U.N., around two-thirds of civilian deaths and property destruction have been caused by the Saudi-led coalition. Amnesty International has also reported that "more civilians have died as a result of coalition airstrikes than from any other cause during the conflict in Yemen."

Amnesty lambasted the U.S. for fueling the conflict. Citing "damning evidence of war crimes by the Saudi Arabia-led coalition, which is armed by states including the USA," the human rights organization called on the U.S. and other nations to stop selling the coalition weapons. The Obama administration made over $90 billion in arms deals with the Saudi monarchy between 2010 and 2014. And, weeks after Amnesty told the U.S. to stop selling arms, Washington sold an additional $11.25 billion in warships to the Saudi regime. The White House furthermore "welcomed" the appointment of Saudi Arabia as the head of a U.N. Human Rights Council panel, noting it is a "close ally."

The media reporting on the Saudi attack on the Yemeni hospital expressed a great degree of uncertainty, ambiguity, and even deception. While downplaying who was responsible for the bombing, media networks failed to convey the basic fact that only the U.S.-backed, Saudi-led coalition has an air force, not the rebels in Yemen. Although MSF and the U.N. made it clear that the coalition was responsible, headlines refused to name who exactly was guilty for the attack, and weasel words were ubiquitous -- recalling the same dishonest media equivocation after the Afghan hospital was bombed.

MSF says it hopes to rebuild a hospital in the region of Yemen as soon as possible, yet MSF was forced to retreat from Afghanistan after its hospital was destroyed.