In last night's GOP debate, Bush sealed his fate. He'll never be president. No way, no how. 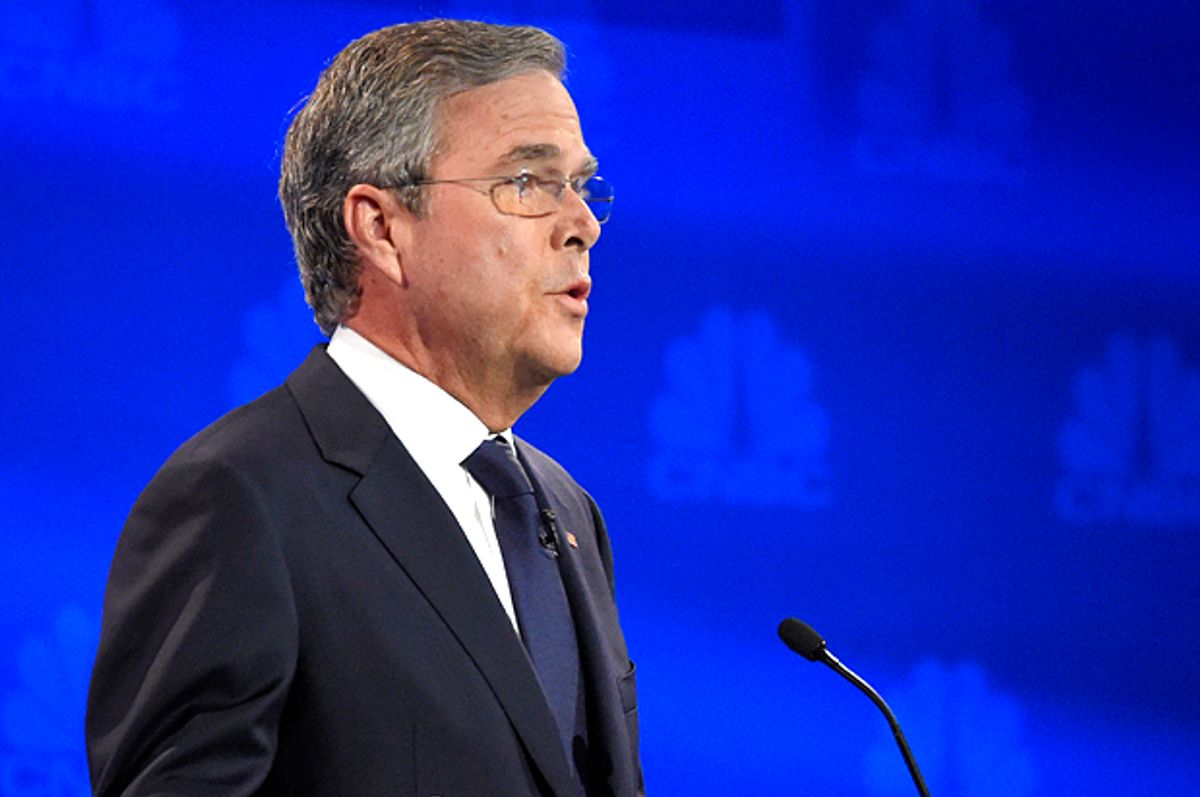 “He needed a moment to assuage donor fears and it backfired. As much as people may say the Bush name is a hindrance, the reality is that his last name is the only thing keeping him in the conversation right now.” -- A South Carolina Republican operative

Ouch. That pretty much sums up all the reviews of Jeb Bush's performance in last night's CNBC debate. What was billed as a make-or-break night for him didn't turn out very well. He appeared listless and dull on stage and afterwards snapped at a reporter who asked him what he thought of his performance saying: “It’s not a performance. I’m running for president of the United States.” It was not the night he needed to stem the bleeding of his wounded campaign. He'll almost certainly trudge on for a while, but it's clear his heart is not in it anymore, if it ever was.

Donald Trump and Ben Carson both did what they had to do -- they delivered for their followers. Trump bragged a bit and called the moderators nasty; Carson smiled and gibbered incoherently and the status quo was maintained. As much as the media wanted them to melt down on stage, it didn't happen. In fact, both of them are actually improving as candidates and debaters, which is rather chilling.

John Kasich and Chris Christie both tried to be the "voices of reason" and ended up sounding like dads who are always mad. Christie's pitch all night was as the dude who was eager for an opportunity to smack the uppity Hillary Clinton: "You put me on the stage with her next September and she won't get within 10 miles of the White House." Kasich tried to attack the crazies and just sounded like one himself. Carly Fiorina, meanwhile, lectured pedantically in her trademark staccato style, while Rand Paul blathered about the Fed and Mike Huckabee reiterated his ingenious plan to cure all diseases so we won't need health care anymore. Other than that, they didn't really register.

I wrote yesterday about the potential for a Marco Rubio vs Ted Cruz cage match and I think that was shown to good effect. As Washington Post reporter Robert Costa observed, "Cruz continues to run in his own lane on the party’s right." Trump fan Laura Ingraham tweeted, "None of the other candidates attack the GOP elites like @tedcruz. He's right--they meet behind closed doors on how to attack Republicans." There is no higher praise among the righties. Cruz remains the best positioned to seize the outsider mantle should the real outsiders fade. Rubio, on the other hand, went after Bush hard and attacked Clinton with a metaphorical meat ax; he was the only one to bring up the Benghazi hearings and it got huge cheers from the audience. He was better than he's ever been -- confident, articulate and aggressive.

The rivalry between these two youthful conservative powerhouses has begun. I still suspect this may be where we end up. Both of these guys are pretty good politicians. In a year when the circus wasn't in town, they would be the frontrunners.

But for all that, the big loser last night wasn't any of the candidates. According to the shrieking malcontents in the GOP, led by Ted Cruz, it was that notorious "liberal media" outfit CNBC. That's right, the big-moneyed Wall Street fan club that features the likes of Rick "Tea Party" Santelli and Lawrence Kudlow is nothing more than a mouthpiece for the socialist Democratic party. Who knew?

There was plenty to criticize about the CNBC punditry before the debate. Their casual commentary was painfully soporific and politically obtuse, undoubtedly helping the TV audience gain new appreciation for the deep insights of Don Lemon and Gretchen Carlson. But the moderators' questions and adversarial attitude were thoroughly appropriate. They were very pointed in their questions, calling the candidates on past comments and pressing them to explain themselves. The candidates, the party and the right wing media did not like it one bit.

Bush's campaign manager complained to CNBC's producer about the amount of time his candidate was allotted. Fox's Bill O'Reilly claimed that he understood the "culture over there" and he was quite sure those moderators were getting a lot of "attaboys" from management. GOP operative Richard Grenell tweeted that "it's obvious that MSNBC has influenced CNBC" and Fox's Steve Doocy wondered if "the CNBC moderators cut off Mrs Clinton the way they're rudely interrupting the GOP candidates." They were all very, very upset.

A fit to be tied Brent Bozell of the conservative Media Research Center  said:

“The CNBC moderators acted less like journalists and more like Clinton campaign operatives. What was supposed to be a serious debate about the many issues plaguing our economy was given up for one Democratic talking point after another served up by the so-call ‘moderators.’”

Even Reagan's Attorney General Ed Meese got in on the act calling the debate a "shooting gallery" set up by CNBC's "biased antagonists."

But no one was more overwrought about all those left-wing liberals at CNBC than Republican Party Chairman Reince Preibus, who said, "I think it was one gotcha question, one personal low blow after the other. It’s almost like they tried to design a Rubik’s cube for every question,” before leaving the spin room in a huff. He then issued a scathing indictment of the network in a prepared statement.

"While I was proud of our candidates and the way they handled tonight’s debate, the performance by the CNBC moderators was extremely disappointing and did a disservice to their network, our candidates, and voters. Our diverse field of talented and exceptionally qualified candidates did their best to share ideas for how to reinvigorate the economy and put Americans back to work despite deeply unfortunate questioning from CNBC.

"One of the great things about our party is that we are able to have a dynamic exchange about which solutions will secure a prosperous future, and I will fight to ensure future debates allow for a more robust exchange. CNBC should be ashamed of how this debate was handled.”

CNBC, for its part, blandly replied that "people who want to be President of the United States should be able to answer tough questions." And indeed they should. They should also be able to assert themselves to claim more time if they have something to say. And they should not whine about the green room they were given or pout that a journalist isn't kissing their ring. Being president is a hard job. The whole party having a tantrum over a debate conducted by a conservative media organization is kind of pathetic and says a lot more about them than it does about the reporters.

But there is an upside to this whole unpleasant episode for these very delicate Republicans. It brought them together. Rand Paul even got all warm and fuzzy about the whole thing saying, "One thing that unified all the Republicans tonight was the disdain for the moderators. I felt like we were all together in thinking that maybe the moderators got kind of carried away."

Nothing creates Republicans solidarity like their bedrock belief that they are victims of the "liberal media." That they are convinced even the financial network CNBC, which fetishizes tax cuts and unfettered free markets, is now among their hated enemies may say more about where the Republican Party is today than anything those candidates said in the debate. They don't know who they are anymore.