"Don't be a slave like I was": Carrie Fisher advises Daisey Ridley on how to survive "Star Wars" as a feminist

Is "The Force Awakens" going to be the progressive sci-fi franchise we've been waiting for? 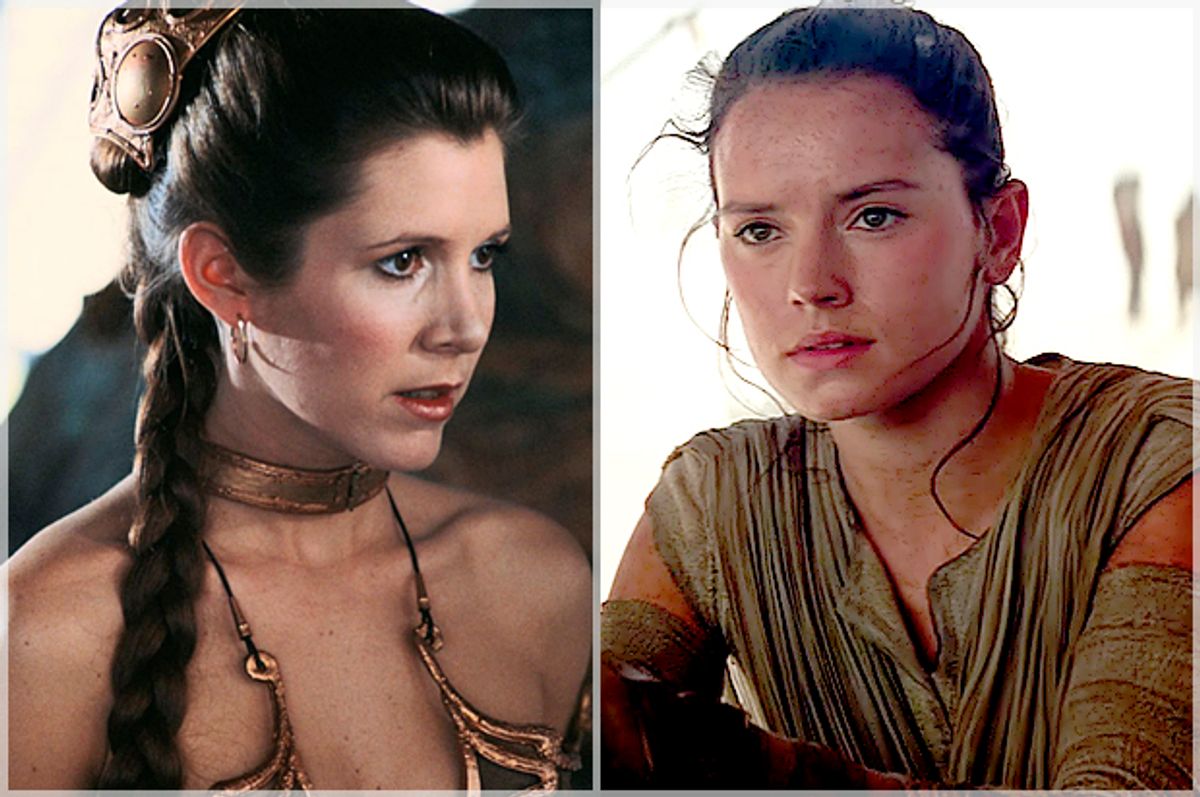 Sorry (but not sorry), misogynist trolls: It looks like "Star Wars" is going to be a much more feminist franchise this time around.

In a new piece in Interview Magazine, original princess Leia Carrie Fisher talks to “Force Awakens” star Daisy Ridley about the hazards of being a sex symbol in the “Star Wars” universe.

After discussing what it is like to be part of a major cultural phenomenon in a more general sense, including what it’s like to be turned into a Halloween costume and merchandized (“have they shown you any little dolls of you yet?”), Fisher chides Ridley: “You're going to have people have fantasies about you! That will make you uncomfortable, I'm guessing.”

Ridley acknowledges that it will, and then refers to Fisher’s status as a sex symbol. Fisher demurs that she isn’t a sex symbol (whatever you say, Carrie…!) but she does have some excellent advice for Ridley on that front.

As she puts it, referring to the revealing, teenage-fantasy-fueling space bikini she wore in "Return of the Jedi": “You should fight for your outfit. Don't be a slave like I was. You keep fighting against that slave outfit.”

Still, it’s not all bad for the ladies up in space. "I'm looking forward to your space kiss,” Fisher riffs. "You're going to have to have one. Every girl does."

In another interview with Entertainment Weekly, Gwendoline Christie talks about her masked villain character, Captain Phasma, and why she’s a good role model for girls, despite being an evil character.

In this conversation as well, the desexualization of the character's outfit is an important focus. As Christie explains, you don’t see Phasma’s skin, and her silver armor outfit isn’t molded to look like a female body. “We know very little about her at this stage, but what I think people are drawn to is that this is a very progressive female character,” Christie explains. “We see Captain Phasma, and we see the costume from head to toe, and we know that it is a woman. But we are used to, in our media, connecting to female characters via the way that they look, from the way they are made flesh.”

As EW points out, most women in sci-fi have "traditionally been relegated to roles as scantily clad damsels in distress." But, much like other masked "Star Wars" villains, Phasma's personality -- and so, yes, her femininity -- is communicated through her body language and physicality, not by the revealing outfit she is forced to wear.