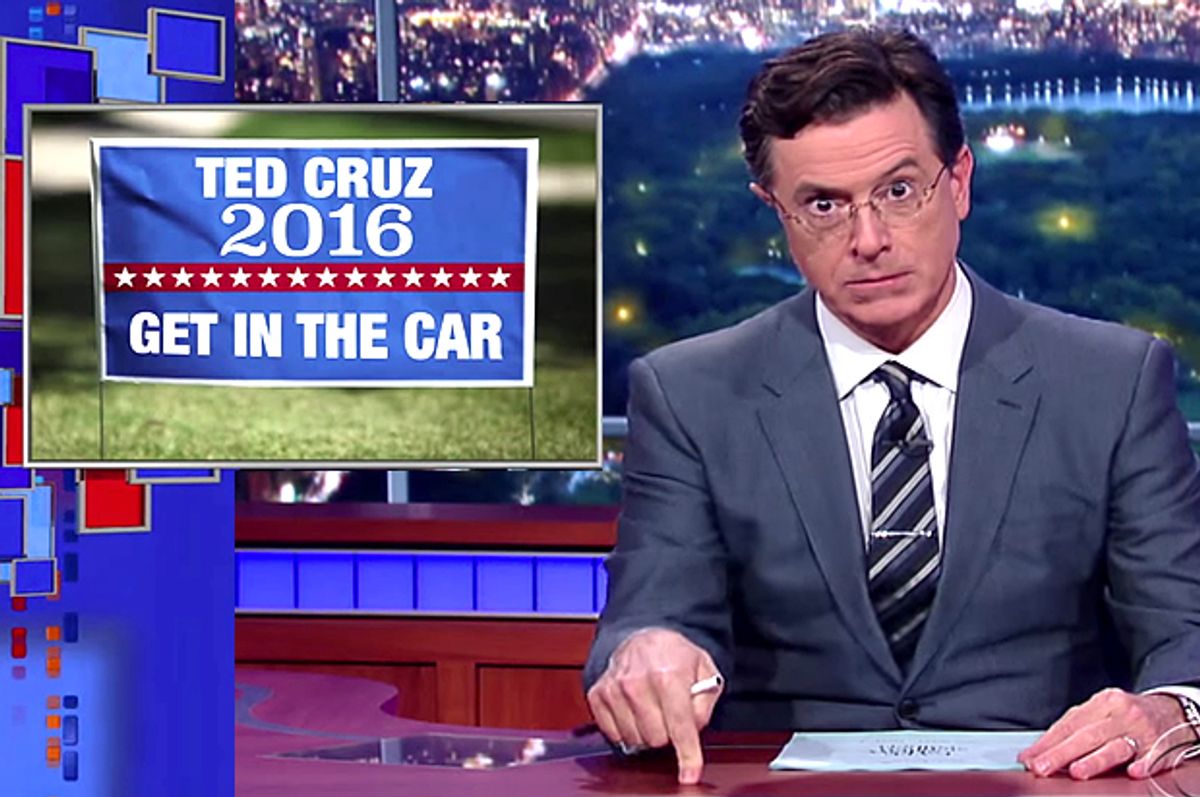 Stephen Colbert joined the list of people blaming the CNBC moderators for asking the GOP uncomfortable questions at the debate on Thursday night's "Late Show."

From the very beginning, Colbert says it was a shitshow -- because the panel asked the one question that no single person in human history has ever answered honestly: "What is your biggest weakness?" "When I interviewed for this job I said that sometimes I work so hard I forget to cash my paychecks." But of all the crappy answers, it was Ted Cruz who Colbert said was "the most, least." Cruz answered with his now famous comment that he isn't the guy you're going to grab a beer with, but he'll drive you home. "That's a great appeal to the voters," Colbert said. "Ted Cruz 2016: Get in the car."

From that point on, it was CNBC who showed us all how to conduct a debate, unburdened by any respect. But, let's be honest, respect is something this GOP primary hasn't had that much of so far anyway. Whether it was tanking poll numbers for Bush or why Fiorina got canned, Colbert said it was the most impolite set of questions "since the Lincoln-Douglas debate started with 'Mr. Lincoln, douchebag says what?'"

Of course, these terrible questions perpetuate the "liberal media" bias that the Republicans love to tout, and they did so with gusto each time they got a question that challenged their campaign narrative or ideology. Even Chris Christie called the moderators rude at one point, saying that people in his state would find it abhorrent, which is really saying something. "Yeah! Listen to the governor of New Jersey," Colbert said. "He knows the people in his home state act like animals! Closing statements in Newark get chopped up and dumped in the Meadowlands."

But after a few of these long-ass debates became overwhelming to the candidates, Donald Trump went to make a deal. Not for him of course, because he can go all night even without debate Viagra. It's the American people Trump sought to save from three hours of nonstop questioning like it some kind of Benghazi hearing or something. That was the point that Colbert joined the Trump campaign. "Donald! You saved us from another hour and a half of that debate! You truly are a great leader and you have earned my vote. As long as you can negotiate your presidency down from four years to .... ya know, two hours feels about right."

But even before the debate began, the complaints were pouring in from the Republican candidates. Debate green rooms were not created equal. Trump's and Cruz' looked like a movie theater and Fiorina's had a jacuzzi in it. Rand Paul's pretty much was a jail cell and Chris Christie got a closet with a toilet in it. "Maybe it wasn't an insult. For instance, the RNC might have just wanted Chris Christie to be closer to where his campaign has gone."

Check out the rest here: