Not just "Dead Man's Party" on a Halloween mix: Oingo Boingo deserves more respect than this 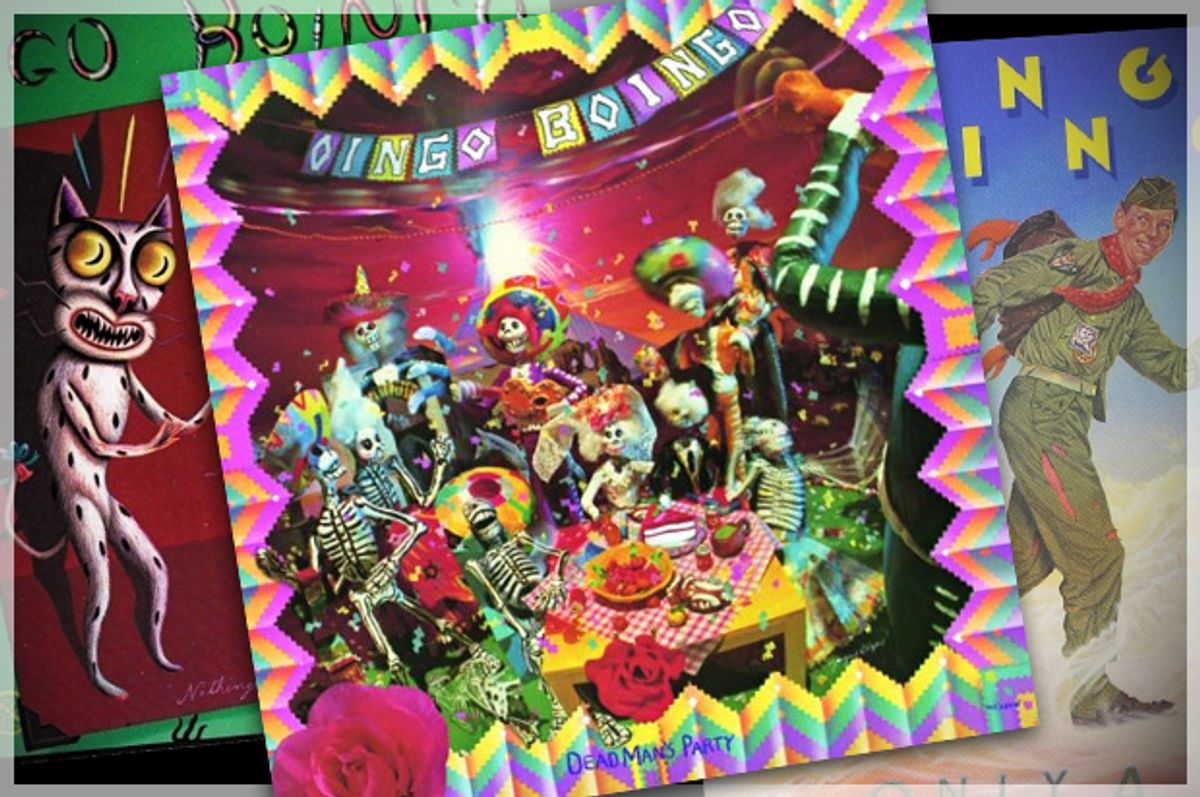 Feel free to use the following controversial statement to bolster your own superior music taste if it’s to your fancy: Oingo Boingo is one of the best, most rewarding and ingenious bands of all time.

Disagree with me? I’m not surprised. But if you do agree with me, I believe you hold to every element of the above “controversial statement.” Oingo Boingo is a band you either adore with frenzied joy or one you don’t care about at all and maybe even deride people for touting. If you don’t mind, I’d like to try to get you to be the former if you’re the latter. It’s Halloween — bear with me.

I’ve got a long history of being the only guy in the room who loves this band. In sixth grade, I’d yet to hear any song of value outside the pre-’80s albums my parents played in their cars. I was sitting in my computer class, feeling as much social anxiety as an 11-year-old probably can, when I heard the horn blasts calling my name. I mustered up the courage to ask my teacher, Mr. Colwell, what and whom I was hearing. He said, perplexed but smiling, “'Dead Man’s Party' by Oingo Boingo.” Before I sat down, he amended his initial information by saying the "Boingo Alive" version was better. It was the first song I ever bought on iTunes and I listened to it more than 300 times in the first year I owned it.

Since then, I’ve had a lot of favorite bands. Right now, the one I tell people is my number one — and am mostly sure actually is — is Pavement. I only say “mostly sure" because always lurking in the shadows are the specters of Danny Elfman’s wild and skeletal new wave band. I saw a Facebook friend post a status saying he’d have a harder time giving up Boingo than the Beatles, and I think I feel the same way.

It’d probably be easier to just come out and say they were my favorite if it weren’t for the fact that when I’ve done so, the statement has been met 45 percent of the time with “who are they?,” 45 percent with outright pretentious laughter and derision, and only 10 percent with a similar level of enthusiasm to my own. I don’t mind those who haven’t bent an ear to the band’s freak-outs, but the critics drive me nuts. Upon pressing them, it becomes apparent they’ve only heard three songs by the group: “Little Girls,” “Weird Science,” and/or “Dead Man’s Party.”

Let’s take this apart. “Little Girls” is the only one I’d understand causing such disdain. It’s a satirical, bubblegum song about pedophilia. I completely understand why someone wouldn’t want to listen to songs about pedophilia, satirical or otherwise, and it would be remiss of me not to say I feel weird about that song too. “Weird Science” is the theme song for a second-tier John Hughes movie about teenage boys inventing the perfect woman. If you have a problem with the misogynist content of such a film and do not like Oingo Boingo as a result, I understand, but would politely hope you can someday divorce the movie from the song in your mind. However, if you’ve heard “Dead Man’s Party” at a Halloween party and thought it was no good, there is no hope for you. You are most likely an unethical and frustrating person to be around.

The strength of Oingo Boingo doesn’t even remotely reside in those few singles, anyway. The fact of the matter is they’ve got a no-misfire ’80s discography. Okay, fine, "Good for Your Soul" leaves a little to be desired, but just swap it out for "So-Lo," Elfman’s solo album, recorded with his Boingo cohorts to get out of a label dispute, and we’re back to a par for the course.

Each album, from 1981’s "Only A Lad" to 1987’s "Boi-Ngo," is attacked from a different vantage point with the same weapons: Elfman’s witty lyricism and madman vocals, Steve Bartek’s remarkable guitar work, Johnny “Vatos” Hernandez keeping the drumbeats dancey and dark all at once, a continually inspiring horn section and rotating bass and keyboard players who always found a way to perfectly gel with the band’s escape-the-asylum sound.

"Only a Lad" was their first statement as a new wave rock band after a few years of performance art expressionism as the Mystic Knights of the Oingo Boingo. The only real issue with their debut album is that it sounds a lot like Devo. You know how Devo did that really bizarre cover of the Rolling Stones’ “(I Can’t Get No) Satisfaction”? There’s a similarly deconstructionist cover of The Kinks’ “You Really Got Me” on here. The overall sonic palate of their debut wears a red helmet.

If you can get past the closeness of sound to Mark Mothersbaugh’s, you start to really appreciate Elfman’s ear for satire. Yes, the troublesome “Little Girls” is on here, but so are the less offensive (at least to those of a leftist bent) “Capitalism” and (at least to those who don’t take their more private vices too seriously) “Nasty Habits.” The best songs, though, are the furious title track and “On the Outside,” the perfectly-orchestrated ode to being a square peg everyone’s trying to shove through a round hole.

1982’s "Nothing to Fear" sees Elfman and company divorcing themselves from any discernible Devo copycatting. This is where Oingo Boingo really started to sound like their own band. “Grey Matter” starts things out with a spookier synthline than you would’ve found in any other new wave material, and yet sillier than you would be able to locate in post-punk bands of the same time. “Insects” sounds like a band playing punk in a house filled with bees and “Private Life” is equal parts depressing, disturbing and delightful in its depiction of a social outcast who doesn’t seem to have much of a public life. Plus, you know you’re dealing with a pretty subversive band if “Wild Sex (In the Working Class)” is actually one of your least provocative songs.

1983’s "Good for Your Soul" sounds like Danny Elfman splitting himself into two different vocalists: the madcap yowler of the first two records and the earnest songbird of the band’s remaining records. The album’s opener, “Who Do You Want to Be?” is business as usual, insofar as business usually entailed music akin to blowing up your office building. But the title track has Elfman losing the shrieking intensity of “Who Do You Want to Be?” and supplanting it with a more conventionally pretty voice. It’s ultimately a better way to convey how frightening he finds daily life. “Good For Your Soul” is the first Oingo Boingo song that seems to ask the listener to take it seriously.

As mentioned earlier, the fourth Oingo Boingo album is actually the first Danny Elfman “solo” album. Due to a label dispute, 1984’s "So-Lo" was attributed to the front man alone. Funnily enough, this is where I’d point most Boingo deniers to begin their journey. The arrangements on songs like “Gratitude” and “Cool City” share far more in common with Elfman’s future as a film composer than with any new wave music of the period. His voice soars skyward instead of slipping into insanity, and the music itself enters a level of complexity you’d have a hard time finding with other pop bands of the period. As far as pop goes, Elfman’s genius lies in his ability to amp up both the intricacy of his composition and the catchiness of his choruses in equal measure.

Things seemed to reach critical mass with 1985’s "Dead Man’s Party." Their most popular songs are both here: the title track and “Weird Science”. But if you can make it past the opening synth marimba (yes, marimba) riff accompanied by Elfman wearily intoning, “There’s life in the ground,” without feeling an immense amount of dopamine coursing through your system, Halloween may not be the holiday for you. Other ways to gauge whether you should ever attend a costume party again include whether you don’t start dancing like a maniac to “Heard Somebody Cry,” singing the chorus of “Stay” by the end of the first listen and playing air guitar to “Help Me.” If you can’t get behind the experience this record offers, I’d hazard a guess you don’t like "Ghostbusters" or carving pumpkins, either. It’s fine if that’s the case — it just isn’t something I’d bring up on a first date, if I were you.

Most Boingo fans I’ve spoken with point to "Dead Man’s Party" as the pinnacle of the band’s career. It’s their best-known album, the songcraft is top notch and their sound is as developed as it ever would become. But I’d have to give the honor of best Boingo album to their somewhat self-titled 1987 release, "Boi-Ngo." It sounds quite a bit like its predecessor; all the elements that made the former great are here, too. But this is, ultimately, the trump card for any Elfman apologist.

Almost every song on "Boi-Ngo" is a ten out of ten. “Home Again” reminds the listener immediately why this is a band so intertwined with October 31st. “Where Do All My Friends Go?” is a vocally layered, alternately sparse and lush song as friendly to new wave as it is to doo-wop and “Elevator Man” is a dance-as-you're-driving song if there ever was one. “New Generation” is perhaps the weakest offering here, but my two favorite songs in their catalogue follow it: the mortality-obsessed yet joyful ballad “We Close Our Eyes” and the ecstatic, organ-driven love song “Not My Slave.” Closing out the set are the resigned yet hopeful “My Life,” the nutcase guitar-and-horns blast of “Outrageous” and the altogether perfect “Pain.”

After this, Oingo Boingo lost some steam. Danny Elfman was gaining notoriety as a film composer and it seems like most of his ingenuity ended up getting channeled in that direction. Their last two records, 1990’s "Dark at the End of the Tunnel" and 1994’s "Boingo," sound like a far less dedicated band recorded them. They flirt with the strains of alternative rock popular throughout the early '90s, and the dalliance doesn’t have quite the same impact. After developing such a unique sound, it’s hard to enjoy when a band goes back to parroting what’s popular.

Perhaps I’ve been too harsh. You may have perfectly valid reasons to not enjoy Oingo Boingo beyond the ones I’ve already listed. Ultimately, everyone’s taste is subjective and different. But for anyone who ever felt like they were “on the outside looking in,” to borrow a phrase from the band, these guys are the whole package. Their early work is the best kind of furious parody, denigrating the straight-laced and counterculture alike for their judgments toward any given misfit, which makes the emotional maturity and authenticity of their records from 1984 on seem a little more pure.

All this to say: If you’ve got an open mind and an ear bent toward the eerie and enjoyable, Oingo Boingo is worth a listen if you haven’t heard them beyond the basic Halloween party mix. If you still think they’re just some ridiculous novelty band, that’s fine too. Just remember Danny Elfman wrote some fantastic songs about people just like you.