"Saudi authorities are denying the evident truth": Doctors Without Borders says it's "beyond doubt" that U.S.-backed coalition bombed hospital 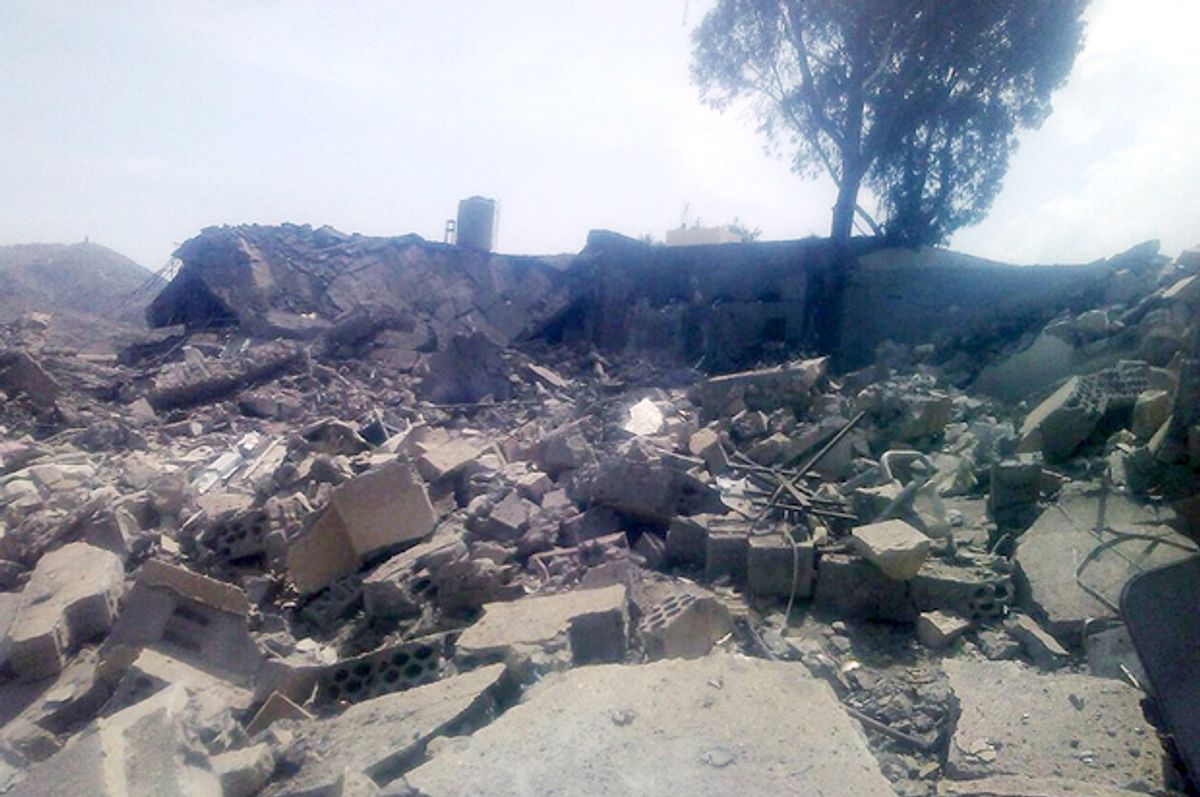 A Saudi-led, U.S.-backed coalition of Western-allied Middle Eastern countries bombed a Doctors Without Borders hospital in Yemen on Oct. 26. That is, according to the United Nations and the aid group itself. The coalition still denies that it was responsible, and Saudi Arabia's ambassador criticized the U.N.

Doctors Without Borders (known internationally as Médecins Sans Frontières, MSF) insisted Thursday in a statement that "it is beyond doubt that [the coalition] struck and destroyed a hospital." The coalition's denial "contradicts all facts," the aid organization said.

"Saudi authorities are denying the evident truth of having destroyed a hospital," remarked head of MSF emergency operations Laurent Sury. "This is an alarming sign for the Yemeni people and for those trying to assist them. How are we to draw lessons from what happened when all we face are denials? How can we continue to work without any form of commitment that civilian structures will be spared?"

The shelling of the hospital was not addressed in the State Department's press briefings on Oct. 28 or 29. State Department spokesperson Edgar Vasquez did, however, tell Salon, "We are very concerned by reports that coalition airstrikes hit a Doctor’s Without Borders medical facility."

The State Department did not take a position on whether or not the Saudi-led coalition -- which the U.S. arms -- carried out the attack, but Vasquez said "We call on the coalition to thoroughly investigate this incident, and, if confirmed, to address the factors that led to them, including if necessary to hold those responsible accountable."

An MSF spokesperson did not directly comment on U.S. complicity in arming and backing the coalition, but told Salon that it pressures both "the coalition and its supporters" to respect medical facilities.

This attack was not the first time MSF's Yemeni hospital had been damaged by coalition airstrikes. Yemen's Haydan province has seen a barrage of airstrikes for the past several months. On at least four instances in June and July, MSF says Saudi airstrikes destroyed civilian areas near the hospital. In some of these attacks, its hospital's windows and walls were shattered.

MSF says these attacks were "directly witnessed" by its team. The organization notes it also "alerted the Saudi-led coalition on multiple occasions that the airstrikes in Haydan were destroying civilian facilities and damaging the hospital."

On the night of the bombing, MSF says it again "alerted Saudi officials in Riyadh that the hospital was under attack," but the attacks continued for two hours.

The Saudi-led coalition has also bombed at least two weddings in Yemen, yet denied responsibility for the attacks at the time.

Human rights organizations have called on the Obama administration, which has done over $100 billion in arms deals with the Saudi monarchy in the past five years, to stop providing the coalition with weapons, which Amnesty International says are being used to commit war crimes.

Earlier this month, on Oct. 3, the U.S. bombed another MSF hospital in Kunduz, Afghanistan, in what MSF called a "war crime." At least 30 people were killed in the attack, including 10 patients, 13 staff, and 7 unidentified bodies. The death toll was still rising three weeks later.

Hundreds of thousands of war-stricken civilians living in Yemen's Haydan district and Afghanistan's Kunduz province now no longer have access to a hospital.

MSF continues to call for an investigation into the destruction of its hospitals in both Yemen and Afghanistan.