The medical miracles of Mike Huckabee: Inside the absurd, dangerous & contradictory health care plans of the GOP candidates

Step 1) Ban life-saving research. Step 2) In spite of that, find cures for all of the diseases. Should be simple! 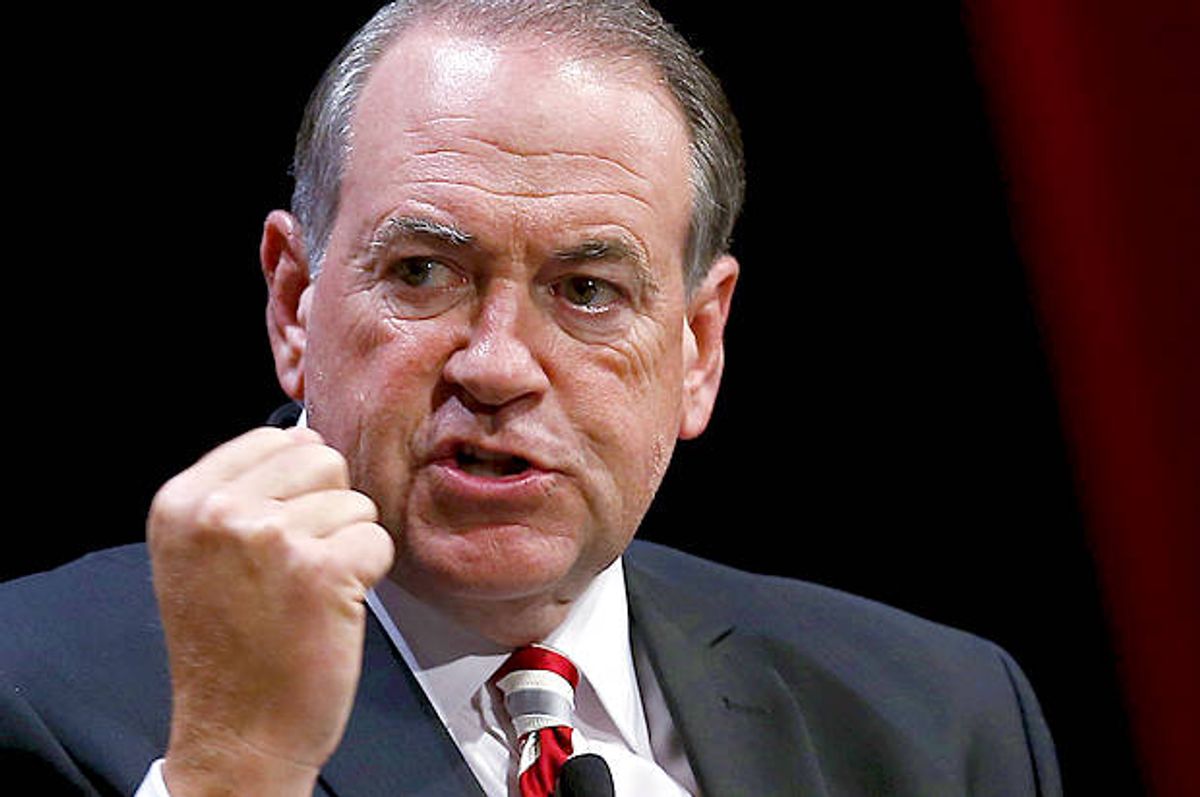 I don't know about you, but I've been a little bit surprised that the Republican debates so far this cycle haven't featured more Obamacare bashing. There was a time, not too long ago, when repealing the hated program was the animating issue of the party -- and in the case of many of those who won in 2010 and 2012, their raison d'etre. As recently as 2014, this was the GOP's top agenda item, the rallying cry sure to bring the crowd to their feet. Now we barely hear about it from the Republican candidates for president. But that doesn't mean that some of the presidential candidates aren't offering up some ideas to replace it.

Dr. Ben Carson might be expected to have a serious health care plan since he is a serious medical professional and all. But he has struggled to explain exactly what it is. Indeed, he's been so incoherent on the subject that he seemed to have given Fox News' Chris Wallace a migraine trying to sort it out.

However confused he is on the details of health care policy, it's more disturbing that he thinks a useless supplement will cure serious diseases and used his reputation as a world class doctor to dupe people into buying it:

Carson was a spokesman for Mannatech, which claimed its “glyconutrients” could treat cancer, autism, multiple sclerosis, and AIDS. “The wonderful thing about a company like Mannatech is that they recognize that when God made us, He gave us the right fuel,” Carson said in a 2013 speech praising the company. On Wednesday, he denied any involvement with Mannatech.

Carson even credited the supplements as being powerful enough that he didn’t need surgery for advanced prostate cancer. Dallas Weekly reported in a 2004 interview that Carson “said his decision to have a medical procedure resulted from his concern for those people who might neglect traditional medical procedures because they had learned of his personal experience with supplements.”

The neurosurgeon told Dallas Weekly that he had his prostate removed to be a role model.

“I knew that other people with my condition might not have been as religious about taking the supplements as I had been,” Carson said.

You'll recall that on Wednesday, this man of allegedly great integrity said it was "propaganda" to say he endorsed this product when asked about it in the debate. Carson insists that while he was paid for some speeches he wasn't a paid endorser and that he genuinely believes in the product. He must know that as attorney general, Texas Governor Greg Abbott, hardly a big government liberal, sued this company for false advertising. It's hard to know whether it's worse that he might be scamming vulnerable people with false hope or if he actually believes this product can cure diseases like Alzheimer's and cancer. Either way, it's yet another example of Ben Carson's very, very odd duality: the brilliant neurosurgeon vs. the frighteningly vacuous public figure.

Carson is not the only Republican presidential candidate who takes a radically unorthodox approach to health care policy. Former Governor Mike Huckabee's approach may be even weirder. Recall what he said in Wednesday's debate:

HUCKABEE: We need to be focusing on what fixes this country. And I’ll tell you one thing that we never talk about — we haven’t talked about it tonight.

HUCKABEE: If you do that, you don’t just change the economy, you transform the lives of millions of hurting Americans.

And then he returned to it a bit later:

HUCKABEE: Well, and specifically to Medicare, Becky, because 85 percent of the cost of Medicare is chronic disease. The fact is if we don’t address what’s costing so much, we can’t throw enough money at this. And it’s why I’ve continued to focus on the fact that we need to declare war on the four big cost drivers because 80 percent of all medical costs in this country are chronic disease. We don’t have a health care crisis in America, we have a health crisis.

And until we deal with the health of Americans and do what we did with polio — when I was a little kid, we eradicated it. You know how much money we spent on polio last year in America? We didn’t spend any. We’ve saved billions of dollars.

You want to fix Medicare? Focus on the diseases that are costing us the trillions of dollars. Alzheimers, diabetes, heart disease and cancer. Eradicate those and you fix Medicare and you’ve fixed America, its economy and you’ve made people’s lives a heck of a lot better.

Huckabee's health care "plan" is to find cures for diseases so we that people don't get sick anymore. And since he said this in the context of Medicare, he presumably believes that once we accomplish that, people will live forever.

Not that there's anything wrong with putting effort into curing disease, of course. But Huckabee, being a doctrinaire anti-choice zealot would foreclose some of the most promising research into all of these diseases. The phony Planned Parenthood videos have accomplished their goal of inflaming the culture war against abortion but the unfortunate side-effect is that labs that have been dependent on fetal tissue research are now in danger of being unable to do their vital work.

Since July, an anti-abortion group's deceptively edited videos targeting Planned Parenthood for allegedly profiting off sales of fetal tissue appear to have prompted at least four arson attacks on Planned Parenthood clinics. And even though the allegations were bogus, the vilification of the women's health organization has done additional damage: Violent threats and a political chill in the wake of the videos have begun to undermine potentially life-saving research on diseases including diabetes, Parkinson's, and Alzheimer's. Fetal-tissue donation programs essential to such research have been shut down, supplies of the tissue to labs have dwindled, and legislation is brewing in multiple states that could hinder cutting-edge scientific studies.

Many states are in the process of banning all fetal tissue research and there are plans to introduce a federal ban in the new Congress.

Ben Carson participated in some research that used fetal tissue, but he has distanced himself from the practice, calling any suggestion that he is a proponent of it "propaganda." (Naturally.) Huckabee himself suffers from diabetes and, like Carson with the bogus cancer cure, he too has been involved with an "alternative medicine" outfit that sells a product (in this case a "kit" that tells people to exercise and diet) promising a cure for the disease.

So here we have two Republican candidates for president.One has offered an incomprehensible health care plan that he cannot explain to the public. The other proposes that the correct approach is to "pass real reform that will actually lower costs, while focusing on cures and prevention rather than intervention.") Both of them oppose fetal tissue research that promise advances in actually curing diseases while endorsing ludicrous scams that don't work.

Every Republican promises to vote to repeal Obamacare. It's a litmus test right up there with tax cuts and abortion. Carson says it's the worst thing since slavery, Huckabee calls it a "nightmare." It looks like magical snake oil cures are now what passes for serious health care policy to replace it.