The twisted, authoritarian logic of population control: Why the end of China's "one child" policy isn't nearly enough

A generation after introducing its extreme limits on reproductive freedom, China has finally loosened the reins 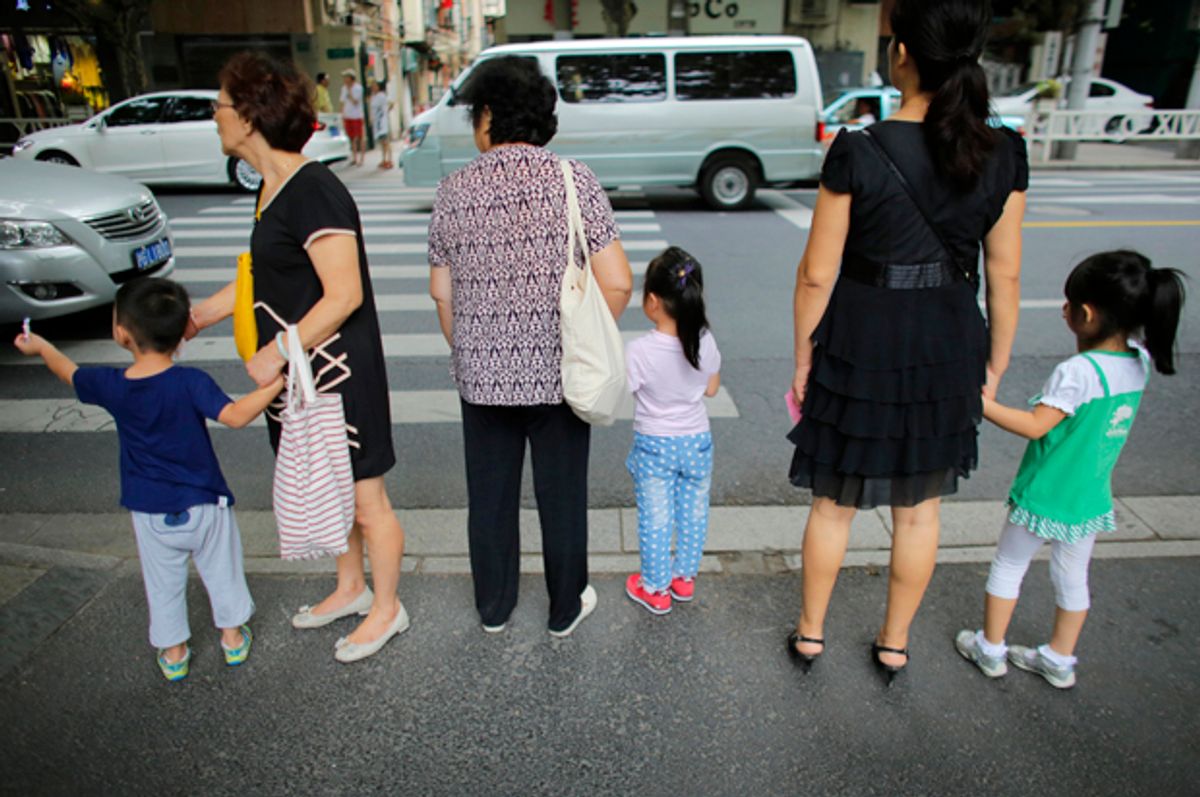 Yesterday morning, we learned that China has ended its decades-long one-child policy, allowing all couples to have two children for the first time in more than 30 years. The announcement comes on the heels of a four-day Communist party summit in Beijing. At this summit China’s leaders debated financial reform and growth. In response to statistics that the Chinese population is aging, the nation’s official news agency, Xinhua, released a statement saying that China will now, “fully implement a policy of allowing each couple to have two children as an active response to an aging population.”

Some are celebrating this change as a positive development. Others, however, say that it isn't nearly enough.

“The state has no business regulating how many children people have," William Nee, a Hong Kong-based activist for Amnesty International told the Guardian. "If China is serious about respecting human rights, the government should immediately end such invasive and punitive controls over people’s decisions to plan families and have children.”

The Communist Party counts the generation-long policy a success, crediting it with preventing 400 million births, and thus contributing to China’s economic stability and growth. However, these changes have come at great personal cost to many Chinese. State-sanctioned forced sterilizations, sex-selective abortions and infanticide have caused a dramatic gender imbalance in the country.

Instituted in 1979, China’s policy began as a strategy merely to encourage Chinese couples to have just one child. In 1980, it went from being a suggestion to a mandate; and, in 1983, China saw one of the largest mass sterilization drives in world history. Twenty million women were sterilized.

After much resistance and harsh critique, the government loosened the policy a bit in the late 1980s, allowing more liberal guidelines on second births. In 1988, the Chinese government allowed rural couples whose first child was a girl, to have a second. Increasingly, the policy has been more loosely applied, though with very little leeway for families with more than two children.

Immediately upon receiving the news of China’s policy change, handwringing commenced over the environmental impacts of changing the policy. As it turns out, however, the real environmental danger in China is not the fertility of Chinese women, but instead the lax regulation of greenhouse gas emissions from its energy plants. Meanwhile, the dangers of unchecked population fear mongering are vast.

The one-child policy came along as fears of overpopulation were running rampant. Stanford biologist Paul Ehrlich led the charge with his bestselling book "The Population Bomb," the title of which alone suggested an impending catastrophe if poor women in the Global South were allowed to have children unchecked. Though his work has largely been discredited -- millions of people did not die of famine in the 1970s as he had predicted -- there are lingering fears of an overpopulated planet. And usually those fears have to do with increasing numbers of brown bodies.

The consequence of such fear has been to try and control and coerce women in those countries. This is an age-old and ongoing project of the United States in particular.

In her book, "Reproducing Empire," historian Laura Briggs documents the history of reproductive coercion and forced sterilization in Puerto Rico, nothing that after World War I, the question of reproduction became the central “problem” regarding working class women on the island. A program of mass sterilization ensued.

But the logic of such policies is confounding and global politics are complex. On one hand, population alarmists argue that poverty and famine are the results of overpopulation. In fact, as Briggs notes, they are not; they are the result of overconsumption and pollution, largely perpetrated by western industrialized nations and the eviscerating effects of a colonial legacy. On the other hand, many of those worried about overpopulation don’t quite trust the women of the Global South to be able to handle the problem themselves through education and access to comprehensive reproductive health care. Ehrlich, for example, went so far as to suggest putting sterilizing agents in the water and rice of "third-world" countries. Beyond China, mass sterilization programs have been undertaken in Canada, Czechoslovakia, Germany, Japan, India, Israel, Peru, Russia, South Africa, Sweden, Switzerland, Uzbekistan and in the United States. The World Health Organization, the Office of the High Commission on Human Rights and several UN agencies jointly issued a report last year finding that the these programs have disproportionately targeted women of color, people with disabilities, and intersex and transgender people.

Many progressives find no fundamental contradiction between supporting population-control policies like China’s  and reproductive rights. But as we see, the impacts of such policies, at home and abroad, are real and devastating.  The key argument for population control is anchored in the assumption that rapid population growth causes of poverty, economic and political instability, and environmental degradation -- and, further, that the way to solve the problem is to control women’s fertility.

Upon closer examination, of course, the root of the problem is environmental deregulation, unchecked development and globalization. As China takes one small step towards recognizing these facts, we must continue to push for a complete repeal of this inhumane policy.