There's one group missing from the talks to end the Syrian civil war: Syrians 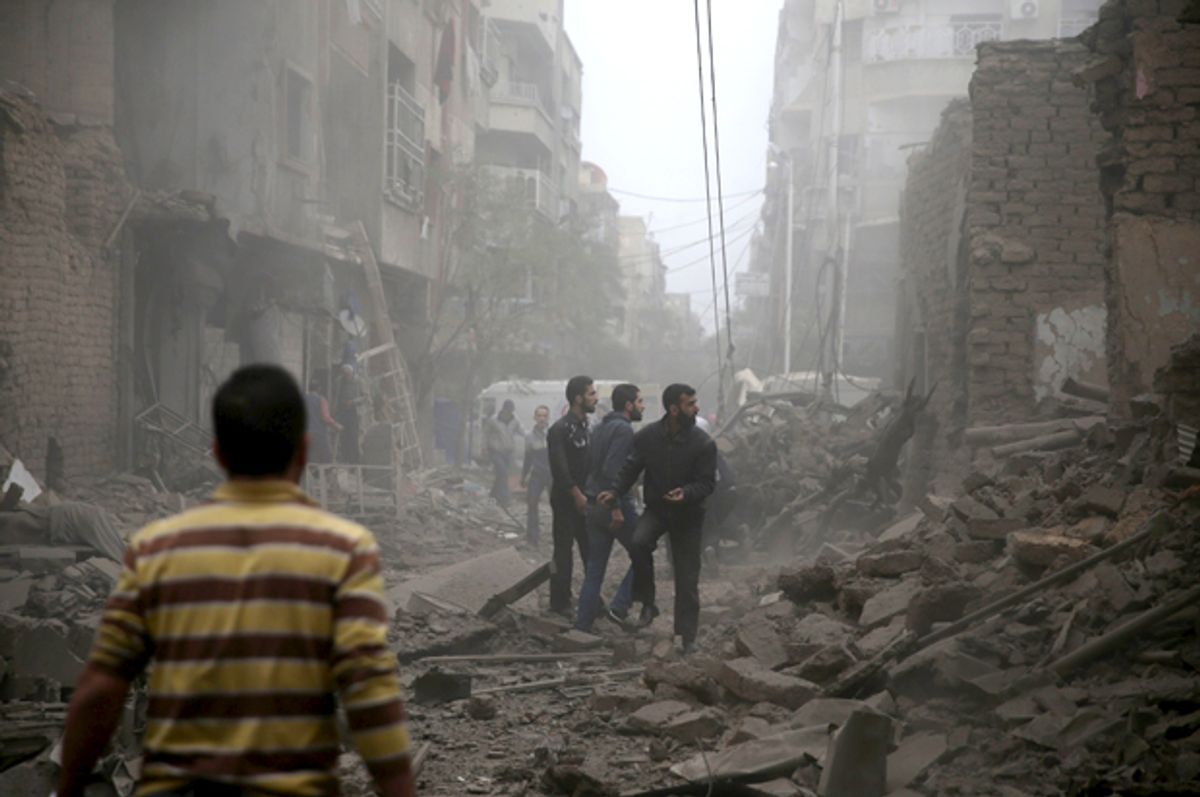 A catastrophic civil war has devastated Syria for over four-and-a-half years. More than a quarter of a million people have been killed. Almost 12 million Syrians, over half of the entire population, are displaced, with four million external refugees registered with the U.N. Large chunks of what were formerly bustling cities have been reduced to rubble.

Senior diplomats representing almost 20 countries are converging in Vienna in an attempt to reach a political solution to stop this disastrous conflict. Yet one group is missing: Syrians themselves.

A.P. confirmed that the U.S., Saudi Arabia, and Turkey, who support Syrian rebel groups; along with Russia and Iran, who back the Assad government; will be at the talks. In a press briefing on Wednesday morning, the State Department also noted that Egypt, Qatar, Lebanon, France, and the E.U. will participate.

Syrian voices, however, will absent from the discussion. Syria's main political opposition body, the Syrian National Council, and other rebels were not invited to the international Vienna talks. The Assad government was not invited either.

Rebel-aligned countries want Assad to step down. Many say they will consider a brief transitional period. Iran and Russia insist that Assad must stay in power for the near future. On Friday, nevertheless, Iran said it would support a proposal that would give Assad a six-month transitional period, before an election to determine Syria's next leader.

In 2011, as uprisings spread around the Middle East and North Africa, Syrians began to protest the dictatorship of the Assad family, which has controlled Syria uninterrupted since 1970. Government forces crushed the demonstrations, which turned the uprising violent. The subsequent meddling of dozens of foreign nations has only exacerbated the conflict.

The Syrian Civil War has widely been characterized as a proxy war. The U.S. and allied countries have supported a variety of rebel groups, which are greatly divided on ideological lines. Saudi Arabia and Turkey have also funded extremist groups that have committed war crimes and carried out sectarian attacks on civilians of other ethnic and/or religious groups. Specifically, these two U.S. allies have indirectly backed al-Nusra, Syria's al-Qaeda affiliate. Turkey has also been accused of helping ISIS quash Kurdish rebels.

Russia and Iran, on the other side, have propped up the Assad government, which has bombed civilians areas in rebel-controlled cities for years. According to the Syrian Network for Human Rights, a pro-rebel organization based in the U.K., the government is responsible for the vast majority of civilian deaths in the war. Officials who defected from the government say it is engaging in mass torture campaigns, brutally beating and abusing dissidents. Assad has also blockaded neighborhoods like the Palestinian refugee camp Yarmouk. In a shift away from U.S. policy, Israel has welcomed Russian intervention in support of the Assad government, and has even coordinated with the Russian military.

The rise of ISIS in 2014 further complicated the already convoluted alliances. ISIS has fought most rebel groups, as well as the Syrian government. With the rapid spread of the extremist group, the U.S. also softened its rhetoric about Assad. In October 2014, the US did not invite the Free Syrian Army (FSA) to be part of a conference with the coalition fighting against ISIS (although extremist theocratic Gulf states were invited). That same month, the U.S. said it was no longer formerly coordinating with the FSA.

In December, representatives of the FSA and Syrian National Coalition said they had "been almost completely cut off from what they saw as already meager support from the Western coalition led by the U.S." The Obama administration embarked on a new policy of training its own soldiers. It spent millions of dollars on a small handful of fighters who promised to only fight ISIS, not Assad, but who were promptly killed or kidnapped upon arriving in the country.

This week, the U.S. announced a new strategy: After months of insisting there would be no American "boots on the ground," the Obama administration is deploying troops to Syria to fight ISIS.

Today, over a dozen countries are involved in the war in Syria, many of which are bombing and/or funneling weapons to groups they support. The New York Times has called the conflict "a proto-world war."

In the Vienna talks, these countries are working together to try to find a way to put out the raging fire upon which they have all dumped gasoline. And yet, what continues to be clear is that the input of Syrians themselves is seen as superfluous.

For years, Syrians have had little say in the violent conflict that has destroyed their country. Now, Syrians are not welcome at the inter-imperial conference that will determine their fate.