"I can fix Ash now": Bruce Campbell reveals how his cult hero matures — with "dentures and a man girdle" — for "Ash vs. Evil Dead"

Salon talks to Bruce Campbell about bringing "Evil Dead" to TV, working with Sam Raimi and cowboy life in Oregon 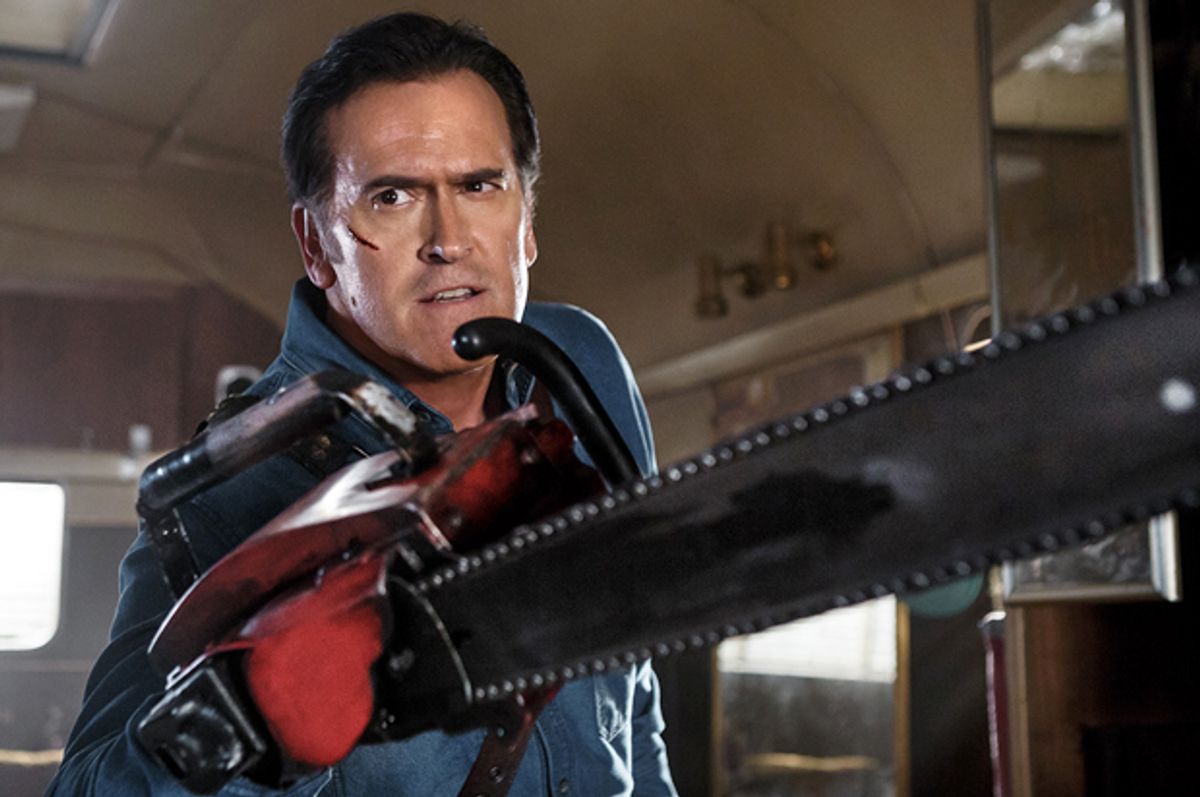 The boomstick is back! 23 years ago this month, “Army of Darkness” premiered, and the third chapter in the “Evil Dead” saga ended up being its last — until now, that is. After years of negotiations and plenty of augmented plans, the television series “Ash vs. Evil Dead” premieres tonight on Starz. Cult icon Bruce Campbell reprises the titular role of Ash Williams in the series, replete with his penchant for one-liners and his signature chainsaw.

We caught up with Campbell to discuss what it feels like to jump back into the character of Ash after all these years and how playing a cowboy on TV makes his life in Oregon easier.

When you guys did “Within the Woods,” the short that inspired “Evil Dead,” you were 20. Here you are almost four decades later, back in those shoes. You’re continuing a story that you started telling...

The amazing thing is that — once we got back on that set for the first time to shoot the pilot — I realized that Sam Raimi and I have known each other since junior high school, we still know each other, we can still deal with each other, we’re still in the business, and we were able to pull this show off. So to me, the victory has already been won.

You mentioned the fact that you’re still in the film business after all these years. When you did “Evil Dead,” when you did “Within the Woods,” did you have any inkling that you had a career in front of you? Or did you think, “Hey, I’ll do a couple of movies and that’ll be it”?

We didn’t even think we’d finish the first “Evil Dead,” because it took three years to finish. So there was no long-term anything. It was, “Holy crap! Are we even going to finish this movie?” Because if we’re not gonna finish it, we’re not gonna get our money back. Then we’re not gonna do another movie at all. We thought there was a lot at stake with the first movie. We had investors. Thankfully, they’re all pretty happy now.

With the first “Evil Dead” movie, at what point did you realize that maybe you had something there? It took that long, and I know there were also issues actually getting it released.

Well, no distributor would pick it up here in the U.S., so we started it in England. It was the response over there. It was second only to “E.T.” over there. In ’83, “Evil Dead” was the number-one video in the UK. You look down the list, and you see “The Shining” was number eight or 11. That’s pretty sweet. You beat Stan the Man at his game, horror movie for horror movie. We beat “The Shining.” Get out of town! That’s it, right there!

For me, though, it was seeing it in my local movie theater. That was it. It’s where I saw all the movies in my formative years. To see our movie in the same theater, sitting in the same seat, same popcorn. I went, “OK. That’s it. We did it.”

So you were still in Michigan at that point. I’m assuming you made the move to L.A. at least for a little while, right?

I did my 10 years of penance there. I went after “Evil Dead 2.” After “Evil Dead 2,” we dealt with Dino De Laurentiis. We were gonna get more of a release. There was more at stake. So I moved to L.A. I was there for about 10 years, from the late ’80s to the late ’90s. I went, “No one’s shooting here anymore.” Then I just bailed. Now I live in Oregon.

Do you feel like an outsider in the world of show business because you’re not in L.A., or…

I’ve always been an outsider. Even when I was there. I’m not a schmoozer. I’m not that guy. I like working. I like working with people. I like going to events, if you’re promoting something for a reason. I don’t go to other actors’ premieres. Used to do that in the early days just to get your picture taken, but that’s stupid. So I actually can’t wait to see what actors show up at the “Evil Dead” premiere that had nothing to do with the series. That’s gonna give me a chuckle.

I can’t imagine how different the pace of life is between small-town Oregon and L.A.

The guy who’s standing in front of you at Starbucks has a fleece coat with dog hair all over it, his hair’s sticking straight up, and the guy’s a millionaire. You wouldn’t know it. Driving a crappy old truck with a scraggly old dog. That’s Oregon. Whereas Miami — doing “Burn Notice” down there — people who don’t have money are trying to show you that they have it. It’s all smoke and mirrors. I love the reality of Oregon.

A week after I moved in, my neighbor comes driving up my driveway. He goes, “I understand you used to play a cowboy on a TV show. Why don’t you run me a hundred head of cattle up the road this Saturday?” So I did. I helped him run his cattle up the road. I said, “You got a horse? Let’s go.” I got to meet my neighbors that way. That’s Oregon.

Let’s double back to “Ash vs. Evil Dead” for a minute. When did you guys realize that you’d be able to continue doing something with “Evil Dead?” There was talk of a movie for years and years, but talking about and trying to make it happen is obviously different than actually seeing it in a tangible way.

Oh believe me, I’m gonna laugh my ass off at the premiere! Not because of the show. Because we got here. Three different movies made by three different companies, and now you want to work out a deal with them to make a TV show? Good luck, Chuck! We had to negotiate that. We had to dodge around a lot of stuff, a lot of personalities, a lot of money. It’s kind of interesting. It came about because TV is finally ready for us.

The aftermarket of the “Evil Dead” movies stayed strong, but what people don’t forget was that “Army of Darkness” was a bomb. It cost $13 million and made $13 million. It was effectively dead for at least a decade. Then this company, Anchor Bay in Michigan, started releasing deleted scenes and making-ofs. They brought the interest back, and stoked it. “Army of Darkness” now is an American movie classic, for God’s sake! Time was our friend, and television caught up with us. You now have premium channels that allow you to do whatever you want, and we’re digging that.

At that point, you had to think that was it. Very rarely does someone get a second chance at the same story, especially after that much time. You don’t often get a chance to go back to a character or a story.

Yeah, because I can fix Ash now. I wanna fix him. I have the skills. I have the tools to flesh him out and make him a full-fledged character. As a younger actor, you’re not always thinking about that. You’re thinking about nailing the one-liners. But now, there’s bigger import. You’re a leader. You’re a teacher. You’re a tormenter. You’re the veteran. So Ash is now the old guy in the platoon with the cigarette hanging out of his mouth. I’m good with that. We haven’t hidden the fact that he’s an old guy now. I love that. He wears dentures and a man girdle. I think it’s just fantastic.

Is Ash a different character in your mind than he would’ve been 20 years ago? Especially now that you have the ability to flesh him out.

No! No! He hasn’t progressed much. He’s the boyfriend you run into, the old boyhood pal you run into. You go, “Wow, that guy hasn’t done anything!” He’s kind of like that. Characters don’t always have to evolve. A half hour will give you just enough of what you want to make Ash a real person. If it was an hour, it would be boring and [in a booming, pretentious tone] pon-der-ous! With all due respect to every other one-hour show, the pace would grind to a halt and Ash would be talking about his fucked-up childhood. Do we really want that? No!