It's not just for stoners. Hemp is known to reduce the effects of eczema and even lower the risk of heart attack 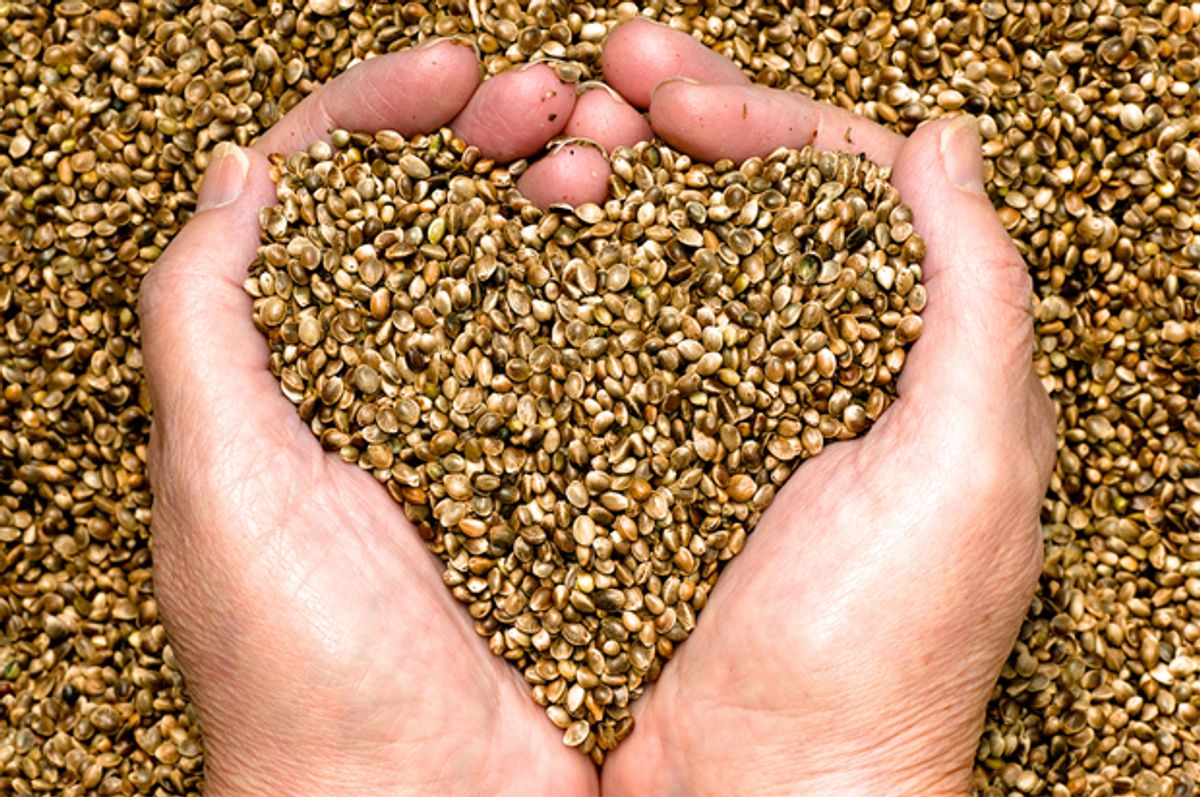 Among the many benefits of the legalization of marijuana would be eliminating any lingering confusion about the legality of its close relation (read, basically the same plant), hemp. While the possession of industrial hemp, also known by its botanical moniker, Cannabis sativa, has never been illegal, the growing of industrial hemp was illegal until the recent passage of the 2014 Farm Bill. The hemp that is mostly illegal, with the exception, at this writing, of four states and the District of Columbia, the kind of hemp you smoke, put in brownies, and usually have a good ol' time after imbibing, contains a high concentration (three percent or more) of THC, the ingredient that induces the familiar Rocky Mountain high. Industrial hemp, on the other hand, has a very low concentration of THC (under three percent) and consuming it in any form won’t give you a buzz. That doesn’t make it worthless though. Turns out, just as actor Woody Harrelson says, hemp is a surprisingly valuable commodity.

In the 17th and 18th centuries in America, hemp was so valuable it was actually illegal not to grow it. You could even pay your taxes with hemp. Until the 1820s, with the invention of the cotton gin, more than three-quarters of the fabrics, textiles, ropes, sails, clothing, canvas, etc. in America were made from hemp. (In fact, the word canvas is derived from the Dutch word meaning cannabis.) In the 1930s, hemp was known as the billion-dollar crop, and during World War II, American farmers were actively encouraged to grow hemp to aid the war effort. A government film called Hemp for Victory extolled hemp’s value as a strong fabric for sails, ropes and clothing. A campaign against hemp had begun, however, even before the war.

The Dupont family led an anti-hemp campaign to boost sales of its synthetic nylon fibers. Andrew Mellon, one of the wealthiest men in America and Secretary of the Treasury under Coolidge and Hoover, had extensive holdings in Dupont and conspired with his nephew-in-law, Harry Anslinger, the head of the Federal Bureau of Narcotics and Dangerous Drugs, to brand hemp a danger to society. They renamed hemp its ominous-sounding Mexican slang word, marihuana, and emphasized its power to destroy the American way of life. Another wealthy magnate, Randolph Hearst, who had heavy investments in timber to produce paper for his newspaper empire, also pitched in to discredit hemp, since it was a cheap substitute for paper pulp made from trees. The growing emergence of the drug war against all things marijuana-related, which began with hysterical films like Reefer Madness in 1936 and the passage of the Marihuana Tax Law of 1937, further stigmatized industrial hemp. Eventually, despite the incredible usefulness of the plant, hemp was bundled with its stoner cousin and production was banned outright in 1958.

Today, thanks to the 2014 Farm Bill and to activists like Harrelson, along with the potential positive environmental impact of using hemp, rather than cutting down trees or using synthetic oil-based products, hemp is making a comeback. Hemp thrives without the use of pesticides (cotton, on the other hand, is grown using a huge amount of pesticides), enhances the health of the soil and even kills weeds. More than 30 countries have legalized the production of hemp and the U.S. seems well on its way to joining them (24 and counting have relaxed hemp production laws). The potential earth-friendly uses for hemp are seemingly endless: paper, fabrics, paints, oils, lubricants, and gasoline, among others.

Besides the usefulness of the plant fibers, hemp seeds themselves have some incredible health benefits. Sharon Palmer, author of The Plant Powered Diet, told Care2.com that hemp is the next “it” food.

Here are six health benefits of hemp seeds that don’t involve psychedelic music or the munchies.

1. Hemp seeds may reduce your chances of a heart attack.

Hemp seeds contain a healthy dose of an amino acid called arginine. The consumption of arginine increases the amount of nitric oxide in the blood, which relaxes and dilates blood vessels, which in turn leads to lower blood pressure and reduced risk of heart disease. One study of 13,000 people found that increased arginine in the blood was associated with lower amounts of C-reactive protein, an inflammatory marker linked to heart disease. The high amount of gamma-linolenic acid (GLA) in hemp seeds is also thought to be beneficial to the health of the heart.

Walk into any health food store or Trader Joe’s and you’ll find chia seeds and flaxseeds. These seeds have been extolled as nutritious powerhouses, with protein comprising up to 18% of their caloric value. Well, hemp seeds are 25% protein, and in addition are high in heart-healthy essential fatty acids. Technically, hemp seeds are nuts, with a mild, pleasantly nutty flavor. They are also referred to as hemp hearts. Hemp seeds can be eaten raw or roasted, are also high in vitamin E and several minerals like potassium, magnesium, zinc, and phosphorus. In China, hemp seeds have been consumed for food and used as medicine for thousands of years.

3. Hemp seeds are an excellent source of complete plant-based protein.

4. Hemp seeds may reduce the effects of skin diseases like eczema.

Hemp seeds have an optimal balance of omega-6 to omega-3 fatty acids (3:1). Fatty acids are thought to affect the body’s immune responses. The symptoms of some skin diseases (itchiness, redness, rash) like eczema are essentially immune responses, and hemp seeds, by improving the level of fatty acids in the body, may lessen the unpleasant symptoms of these skin ailments.

5. Hemp seeds are good for the digestion.

Un-hulled hemp seeds are an excellent source of soluble and insoluble fiber. Soluble fiber forms a gelatinous medium in the digestive system, favorable for healthy gut bacteria to flourish, and may also help regulate blood sugar and cholesterol. Insoluble fiber helps waste to pass through and out of the system.

6. Hemp seeds may help with PMS and menopause.

Studies have shown that gamma-linolenic acid (GLA) can be effective in reducing the symptoms of PMS. It is thought that PMS symptoms are the result of a hormone called prolactin. Hemp seeds are high in GLA, which produces prostaglandin E1, which reduces the symptoms caused by prolactin. Some studies have shown another high-GLA plant product, primrose oil, reduces menopause symptoms. It is believed that hemp seeds may afford the same benefits.