GOP hates the media because they are liars: The damning, evil history of the right's war on a free press

The real story behind CNBC debate, and Fox News' very existence, comes down to the right's fear of being exposed 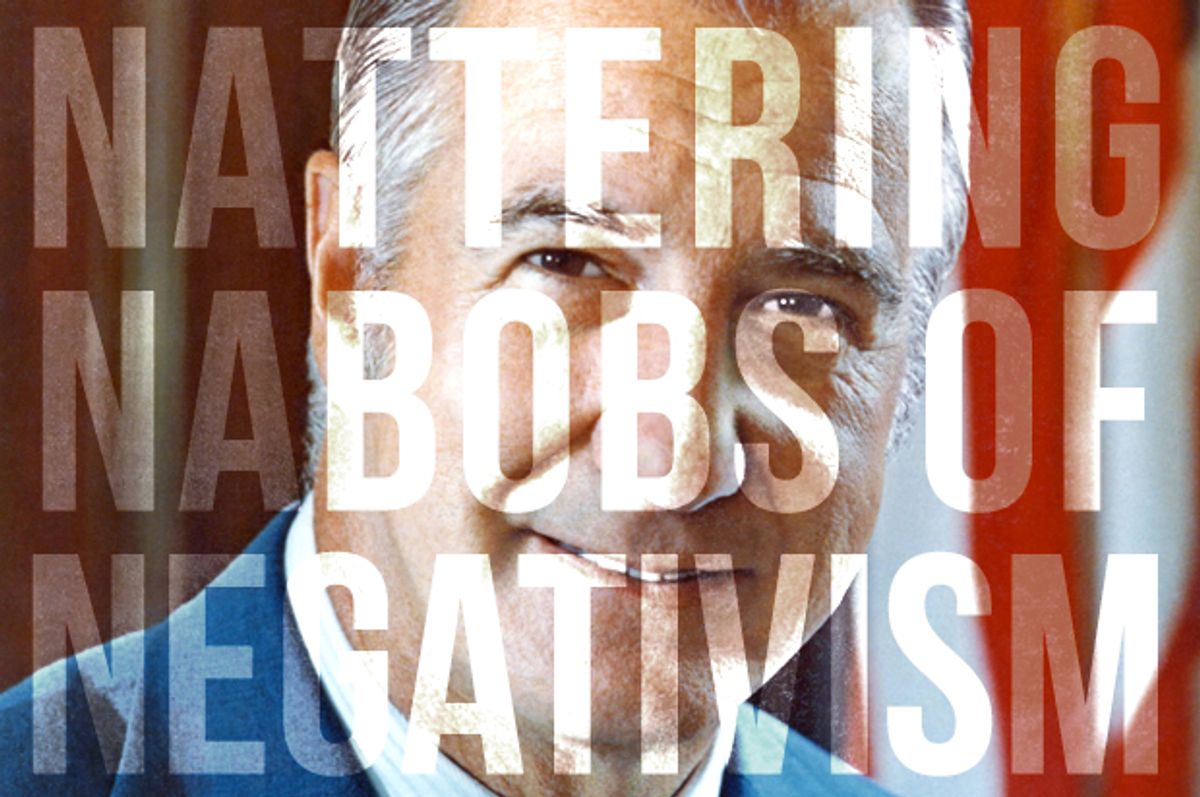 According to the Republican contenders for the presidency who “debated” on CNBC Wednesday night, America’s problems today are caused by “the mainstream media,” which is “the ultimate super PAC” for the Democrats.

This charge is nothing new. Since the 1950s, Movement Conservatives have fought the fair examination of their ideas. They embrace a worldview in which a few wealthy men control the economy and dominate society. This idea repels most Americans. When voters can see it clearly, they oppose it. Movement Conservatives have gained power only by obfuscating reality. They make war on the media because it sheds daylight on their machinations. Transparency threatens their power.

In 1951, a young William F. Buckley, Jr. began the war on the American media. He joined big businessmen in hating the New Deal consensus that called for government regulation and social welfare measures to protect workers. Surely, government bureaucrats should not tell society’s leaders how to run their businesses. Such such an intrusion undermined God’s organization of a proper society, one with a few select leaders on top. In "God and Man at Yale," Buckley railed that secular New Dealers were destroying America. The principles of religion and a free market economy were non-negotiable, he insisted. Unfortunately, when given fair access to facts, Americans chose secular ideas and business regulation. The only way to return Christianity and individualism to dominance in American society was to inculcate those values in followers. He showed how to do this in the book itself: he misrepresented his opponents, he cherry-picked quotations to make them sound damning, he posed as a persecuted victim.

When voters elected Republican Dwight Eisenhower president in the following year on a platform he called the “Middle Way,” big-business Republicans were horrified that the heresies of government regulation had infected their own party. They insisted government regulation was communism, and it was destroying the country. Trying to undercut the president, they attacked media that supported Eisenhower, including the New York Times, the Washington Post, Time, and Life, as communist rags.

In 1954, Buckley and his brother-in-law L. Brent Bozell attacked the American media itself. In "McCarthy and His Enemies," they divided the nation into two factions. There were a few, true Americans—people like them—who stood for American values. They called this tiny faction “Conservatives.” These Conservatives stood against the “Liberals”—the vast majority of Americans who accepted the idea of government regulation--who were forcing communism and secularism on America. These Liberals, they claimed, were winning politically because they had taken over college campuses, the government and the national media. To combat the “liberal media” Buckley launched the National Review in 1955, promising to return America to its true principles.

Movement Conservatives jumped on the idea that a cabal of liberals in the media was undermining their political success. Their worldview was correct, dictated by God even, so that anyone who disagreed must either be evil or misled. The only way to explain Goldwater’s disastrous loss in 1964 was that a liberal media “propaganda machine” had sabotaged him.

The Nixon administration took this idea a step further to explain away its own disasters. Increasingly embattled by anti-war protesters, Nixon’s men insisted that their policies were popular, but a hostile popular press was misleading the public. In November 1969, Vice President Spiro Agnew railed against the eastern elites who controlled major media networks. The following year, he uttered speechwriter William Safire’s famous dictum that anti-Nixon reporters were simply the “nattering nabobs of negativism” and made a thinly veiled threat that if reporters didn’t back off, the administration would start to regulate them. Nixon’s hatred of the press became so consuming that he created the “Plumbers” investigations unit to stop leaks. The Washington Post’s continued gnawing at the Watergate scandal made Nixon’s hatred of the press complete. When he resigned, he blamed his downfall not on the criminal activities in his own White House, but rather on the “leaks and accusations and innuendo” published by the liberal media.

Under Ronald Reagan, hatred of the liberal media took on a storybook quality. Reagan had honed his political skills as a spokesman for General Electric. His motivational speeches emphasized the Movement Conservative worldview, in which hard-working individuals could rise to prosperity so long as they embraced faith and the pesky government stayed out of the way. Fact checking had no place in such a vision, and he dismissed as liberal haters the reporters who laughed at his blithe reworking of reality. In the Reagan years, Movement Conservatives increasingly insisted that their ideas were unpopular only because the liberal media treated them unfairly. During Reagan’s presidency, the FCC accepted the idea that fact-based reporting had an inherent liberal bias. It abandoned the fairness doctrine that required media to present both sides of an argument. With that abandonment, Movement Conservatives were free to push their own worldview, free of facts.

In October 1996, Movement Conservatism gained its own “fair and balanced” media channel. Fox News Channel is fair and balanced, in their view, because it presents an alternative to the fact-based reality of “liberals.” On Fox, a few white men reign unchallenged in a world of Christianity and free-market capitalism. This worldview is inherently right. Those who challenge it are, by definition, a biased liberal media.

This insistence on a false reality was in full force Wednesday. When charged with his connection to the disreputable nutritional supplements company Mannatech, Dr. Ben Carson denied any involvement with it. He lied. When Becky Quick asked Donald Trump to explain his assertion that Senator Marco Rubio was “Mark Zuckerberg’s personal senator,” Trump denied that he had ever said such a thing. He lied (that exact phrase was on his campaign website). When asked about the national debt, Senator Ted Cruz ranted that such a question simply illustrated “why the American people don’t trust the media,” then went on to misrepresent the substantive questions the moderators had asked by turning them into cartoon sound bites. Carly Fiorina's astonishing lie was in the last debate, when she insisted—contrary to all evidence—that she had seen a video in which Planned Parenthood employees murdered a baby to sell its organs.

These lies are symptoms of the real problem: that the rigid ideology of Movement Conservatives concentrates power in a very few wealthy men. When asked to justify with actual math the regressive economic policies that underlie all of their candidacies, the candidates obfuscated. Their numbers do not add up, as they have not added up since President Reagan’s budget director David Stockman notoriously made supply-side tax policy work with a “magic asterisk” that represented cuts and loophole closures to be made later. Charged with the fact that his ideas do not work in the real world, Carson simply said “that’s not true… when we put all the facts down, you’ll be able to see that it’s not true, it works out very well.”

In psychology, trying to force others to accept the reality of a fake world is called gaslighting. It got its name from the 1944 film "Gaslight," in which a husband convinces his wife and their neighbors that she is insane. He repeatedly dims the lights in the house and, when she calls attention to the fading lights, insists that the change is entirely in her own head. The only way to stop gaslighting is to shine the light of reality onto a situation. That makes it imperative for the perpetrator to keep victims in the dark.

Are Movement Conservatives gaslighting voters by trying to keep the media from reporting on their fake reality? After the debate, Ted Cruz sent out a fundraising letter “declaring war on the liberal media.” On Friday, the Republican National Committee pulled out of the planned Feb. 26 NBC debate. RNC Chairman Reince Priebus wrote a letter to NBC News chairman Andrew Lack saying that the CNBC debates was “conducted in bad faith,” and had asked “a series of ‘gotcha’ questions, petty and mean-spirited in tone, and designed to embarrass our candidates.”

Is it getting dark in here?