In "Burnt," the brilliant white douche wins again: We love to excuse bad behavior from successful creeps — how else do you explain Donald Trump? 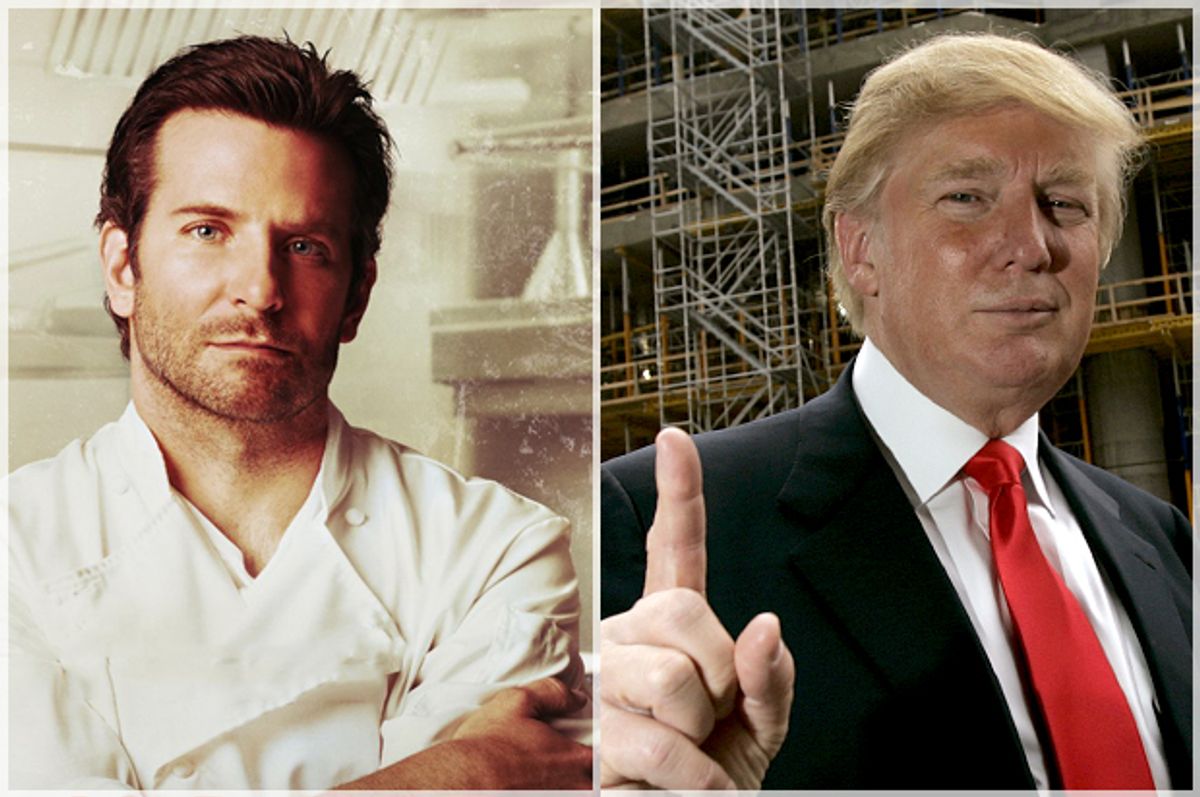 If "Burnt" were being honest, it would have been called “Everybody Wants to Fuck Bradley Cooper.” The John Wells-directed film, in which Cooper plays a bad boy chef, labors under the misapprehension that no matter how horrible, narcissistic or borderline violent a guy cinema’s second favorite Brad plays, everyone is dying to bone him: the talented sous chef (Sienna Miller) who can’t stand the sight of him; the gay, Elmer Fudd-inflected maître d’ (Daniel Bruhl) willing to sacrifice his entire career for just one kiss and even the restaurant critic who is exclusively into women but willing to make an exception for white dudes whose names rhyme with “Madly Boop-her.”

This is despite the fact that (to reiterate) Cooper is playing the worst person in the world. While displaying almost no redeeming qualities — outside of those piercing baby blues — Cooper’s Adam Jones manipulates Miller’s character (whose character may as well be named “Girl Chef”) into working with him and then repeatedly bribes her not to quit because of his abusive behavior; in one scene, he violently grabs her by the shirt for daring to question his authority. Jones forces the Elmer Fudd-ish maître d’ to give him the head chef job at his dying father’s restaurant — because Jones knows Fuddy is in love with him (hey, who isn’t?). And in a telling moment, he facetiously suggests that a shy cook should work for him for free — all to prove a point: You have to be a jerk to get what you want.

It might seem like "Burnt" is "Wall Street" with a frying pan, but the film’s “narcissism is good” ethos is less a philosophy than a love letter to insufferable white golden boys and the people who find them dangerously irresistible. "Burnt" validates and redeems Jones' numerous misdeeds not by having him ever apologize for his behavior or make amends but by repeatedly reminding us a) that he’s so brilliant b) that he’s so damaged (bad childhood: check!) and c) that he’s not overtly horrible to children. In Adam’s redemptive “he’s not so bad after all!“ scene, he deigns to bake Girl Chef’s daughter a cake — and even eats it with her. This is, of course, after he wouldn’t let Girl Chef have the actual day off to throw her daughter a party.

If little separates Adam Jones from Patrick Bateman aside from a knife and an adult poncho, Adam Jones actually exemplifies a time-honored type in American cinema: In real life, you would file a restraining order against him, but unfortunately, he’s attractive, Caucasian and the protagonist of the film. The Hot White Douche is as old as the history of the cinema itself: In the film "His Girl Friday," you’d throw a pie in Cary Grant’s face if he weren’t, well, Cary Grant. In a memorable scene from "The Philadelphia Story," Grant actually facepalms Katherine Hepburn, pushing her to the ground — and then they end up together. And James Bond has made a 50-year career off being a debonair dickbag; a recent review of "Spectre" called 007 a “violent misogynist,” and even Daniel Craig agreed. Sexism just looks better in Tom Ford.

The current cinema has given us famous examples of the Hot White Douche like Edward Cullen and Christian Grey, both of whom teach horny teenage Mormons and middle-aged hausfraus that there’s nothing sexier than abusive relationships. But even less controversial characters have distinct HWD tendencies: In "Reality Bites," Winona Ryder ends up with Ethan Hawke — a pretentious, greasy-haired jerk who spends the whole movie being mean to her — for no other reason than the script says so (they “belong together” or something). "Bridget Jones’ Diary" and "The Ugly Truth" respectively give us Daniel Cleaver (Hugh Grant) and Mike (Gerard Butler), whose workplace behavior should be used as a cautionary tale at sexual harassment seminars.

The problem with a movie like "The Ugly Truth" isn’t just that the screenplay (which was somehow written by three women) lets the misogynist get the girl but that it, like "Burnt," proves his worldview correct. "The Ugly Truth" offers a Cyrano de Bergerac scenario in which Mike helps Abby (Katherine Heigl) get laid by teaching her what men like — which is Cool Girls who wear tight dresses and find all their jokes hilarious. Of course, Abby finds that his methods work — until she and Mike inevitably fall in love. "Jurassic World" offers the same thesis: For women, there’s nothing sexier than a scruffy asshole (this time Chris Pratt) with a six-pack ordering you around.

What’s particularly troubling about this type is how many actors have made quite a cottage industry off them: Matthew McConaughey launched his second career as cinema’s most prolific Hot White Douche — from "How to Lose a Guy in 10 Days" to "Ghosts of Girlfriends Past," his inevitable HWD swan song. Han “I Know” Solo is a famous example of the type, but even Harrison Ford’s non-"Star Wars" characters (see: Indiana Jones, Rick Deckard) have HWD elements. And Pratt is becoming the biggest star in America by picking up where Ford left off: In "Guardians of the Galaxy," he’s yet another rakish cad who doesn’t have time for feelings — he has his Walkman.

The problem with the Hot White Douche — on top of, well, everything — is that they get the privilege of being bad without sacrificing our sympathy or his status as the hero. And this extends beyond Hollywood's fictional heroes — isn't Donald Trump just a natural extension of this type, albeit on a less-handsome scale? His financial success and confident swagger insulate him from backlash against his terrible public behavior. "Sure, he's a crude jerk, but don't you love the way he speaks his mind?"

In a particularly interesting scene in "Burnt," it’s revealed that Omar Sy’s Michel, a chef whose life Adam Jones ruined, only agreed to work for him as an act of revenge. During a pivotal moment, Michel (aka: the only character of color) throws cayenne pepper into a dish to ruin it, thus sabotaging the restaurant’s shot at a three-star Michelin rating. After his vengeance is complete, Sy walks off the screen and is never seen again. The difference between the two men is that because Jones is white, the movie has the privilege of being about him; his shades of grey are the only ones the film considers noteworthy.

You might argue that many of these film are aware their male leads aren’t role models or the “Man of the Year,” and a movie like "Burnt" is more interested in making their protagonists complicated than likable. I understand that in principle, but how often are Omar Sy or Sienna Miller allowed to play characters who are liked not in spite of their flaws but precisely because of them? While cinema has taken tentative steps forward in giving us female anti-heroes (see: "The Girl with the Dragon Tattoo"'s Lisbeth Salander, "Gone Girl"'s Amy Dunne), it’s a lot harder to think of a woman whose bad behavior is eminently fuckable. In "Young Adult," you don’t want to shack up with Mavis Gary; you want to get her into rehab; Amy Schumer's "Trainwreck" has to clean up her act before she can make her relationship last.

For all the praise heaped on "Gone Girl"’s depiction of the female anti-hero, what I found most refreshing was Gillian Flynn’s overt deflation of the Hot White Douche. Nick Dunne’s failings as a husband (his affair, sinking all their money into a failed bar) don’t make him a charming cad, and unlike Cooper’s libidinous chef, the female characters don’t spend the whole movie polishing his ego. Even the women closest to him, like his twin sister, Margo, come to detest the sight of him when they see Nick for who he really is: just a pathetic jerk. Sure, he didn’t kill his wife — but it doesn’t make him a hero.

I wish "Burnt" had the same courage. For all the film’s seeming promises of lessons learned and redemption found, the movie is more interested in giving Adam Jones his great comeback than challenging him to think about why he may have been denied it to begin with. The Hot White Douche might get what he wants, but at what cost?