They're the politically correct: Ben Carson and Bill O'Reilly are the real intolerant speech police

Carson, O'Reilly and other conservatives have flipped the script. It's powerful institutions which suppress ideas 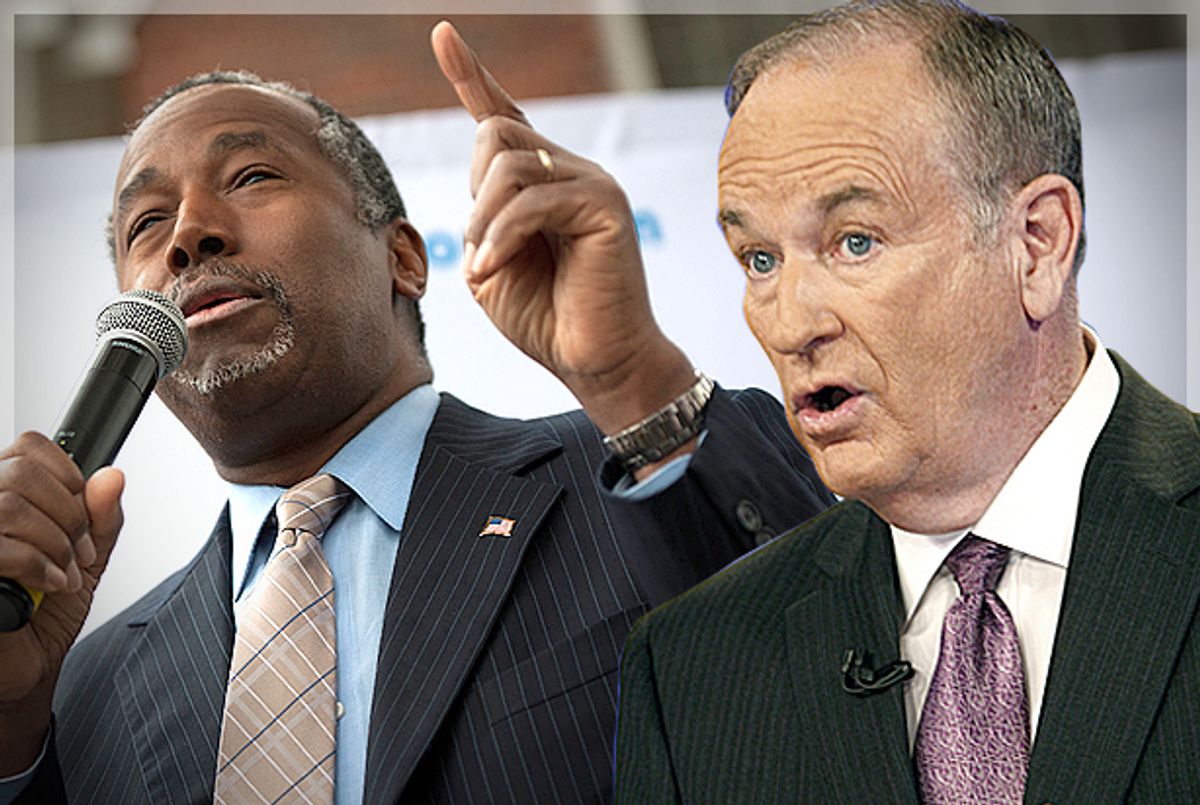 That leftist “social justice warriors” are suppressing speech that makes people “uncomfortable” is the dominant media narrative about free speech on college campuses. There are, of course, examples after examples of the opposite — people with actual administrative authority on campus (not student protesters) both upholding free speech in the face of left-leaning student demands for censorship, and denying free speech to left-leaning activists.

It's also classic conservative concern-trolling. The dominant narrative of students paradoxically coddled and terrified by leftist “SJWs” pretends to be about student wellbeing and protection of free speech, but was always fodder for partisan politics. For example, Fox News frets over the implications of a liberal professoriate because 96 percent of Cornell University faculty donations went to Democrats, but Bill O’Reilly has no plans to send Jesse Watters to the Chamber of Commerce to pose a series of inelegantly leading questions about whether their disproportionate donations to Republicans might be a source of indoctrination.

It’s no secret, in other words, that colleges and universities are among the very few influential U.S. institutions that also tend to question received wisdom about the free market and conservative ideology; so colleges and universities (and not workplaces, or the Motion Picture Association, which sponsored CPAC last year) are predictable targets for conservatives who ostensibly care about free speech.

The trouble for Republicans — and for adherents of the dominant narrative that the left is singularly or particularly illiberal on matters of speech — is that explicit challenges to free speech on campus continue to come from the right. Last week, viable Republican presidential candidate Ben Carson unveiled a plan to use the Department of Education to monitor and police speech on college campuses, a system by which the federal government collects speech reports from campuses and then decides whether the speech in the reports qualifies as propaganda. If it does, per Carson’s plan, the institution in question would lose federal funding.

In short, Carson proposes to encourage people on campus to police each other’s speech, to report to the federal government any speech that might be propaganda, and then to have the federal government determine what is and is not propaganda. Critics of leftist attempts to shut down “insensitive” speech point to the “chilling” effect of an environment that encourages self-policing, watching what we say to avoid causing offense. Carson’s proposal certainly includes that, but goes a step further by inviting one of the most powerful governments in the world to decide for college students and faculty if their speech constitutes propaganda.

You could say that Carson’s expressed disregard for the First Amendment is an outlier or a “cherry-picked” example, but then you’d have to contend with the fact that the Republican National Committee, which held the most recent GOP presidential debate on campus at University of Colorado, Boulder, has made arrangements with the University to prevent UC Boulder students from attending the debate. Of the 11,000 seats provided by the venue, the RNC initially made available only 50 tickets for students (facing some pressure, the RNC generously increased student ticket availability to 150 out of 11,000).

If you support the Republican agenda, it becomes difficult to talk straight-faced about the left-wing, “SJW” assault on free speech while also claiming to care about college students and free speech on campus. Particularly if you’re concerned that colleges and universities suffer from a lack of exposure to conservative ideas, it makes little sense to hold a Republican presidential debate on a liberal college campus but keep liberal college students from attending. Putting aside that the Republican presidential candidates this year are unlikely to produce much of value in the way of ideas or policy proposals, what better opportunity than a Republican presidential debate to expose liberal students to conservative ideas that matter?

However, between the RNC’s handling of student access to the debate, and Ben Carson’s plan to police the speech of liberal professors, the mask of concern for free speech is beginning to melt away. Carson can’t help but admit that he’d rather have state-sponsored censorship than tolerate just one of many U.S. institutions — higher education — where free-market and conservative orthodoxies are likely to face scrutiny. The RNC would rather use a university campus (and all the lofty things it symbolizes) as a debate venue, but surround the venue with fences and keep out actual students, a gesture that puts audience control and exclusivity above the supposed goal of bringing conservative ideas to campus and attracting students to “big tent” (not ring-fenced) conservatism.

These examples from national-scale conservative politics add to a growing list of high-profile free-speech issues and controversies at Duke University, Wesleyan University, the Community College of Philadelphia, American University and University of Illinois, Chicago, all of which contradict the dominant narrative of leftist “SJWs” suppressing speech and getting away with it. From this expanding list we learn three very important things about freedom of speech in the U.S.

One, freedom of speech faces real challenges that we must not dismiss; but those challenges come from both the left and the right.

Two, the actual enforcement of value judgments about speech is a matter not of the political content of speech, but of the power differential between the speaker and the censor; and leftist students and faculty are still far less powerful than the institutions that house and employ us all, or the outside lobbies and politicians who take opportunistic, partisan interest in campus affairs.

Three, with employers monitoring employees’ social media accounts, political donations and affiliations, enforcing “workplace happiness” protocols and employing people in unpaid internships and precarious contracts, the gravest threats to free speech are happening not on campus, but in the workplace.

When will free-speech advocates muster the courage to police and interrogate our most powerful institutions the way they police college campuses? I’m speaking of the corporations, the corporate lobbying firms and the hip-pocketed Congress that so nakedly serves corporate interests above all else.