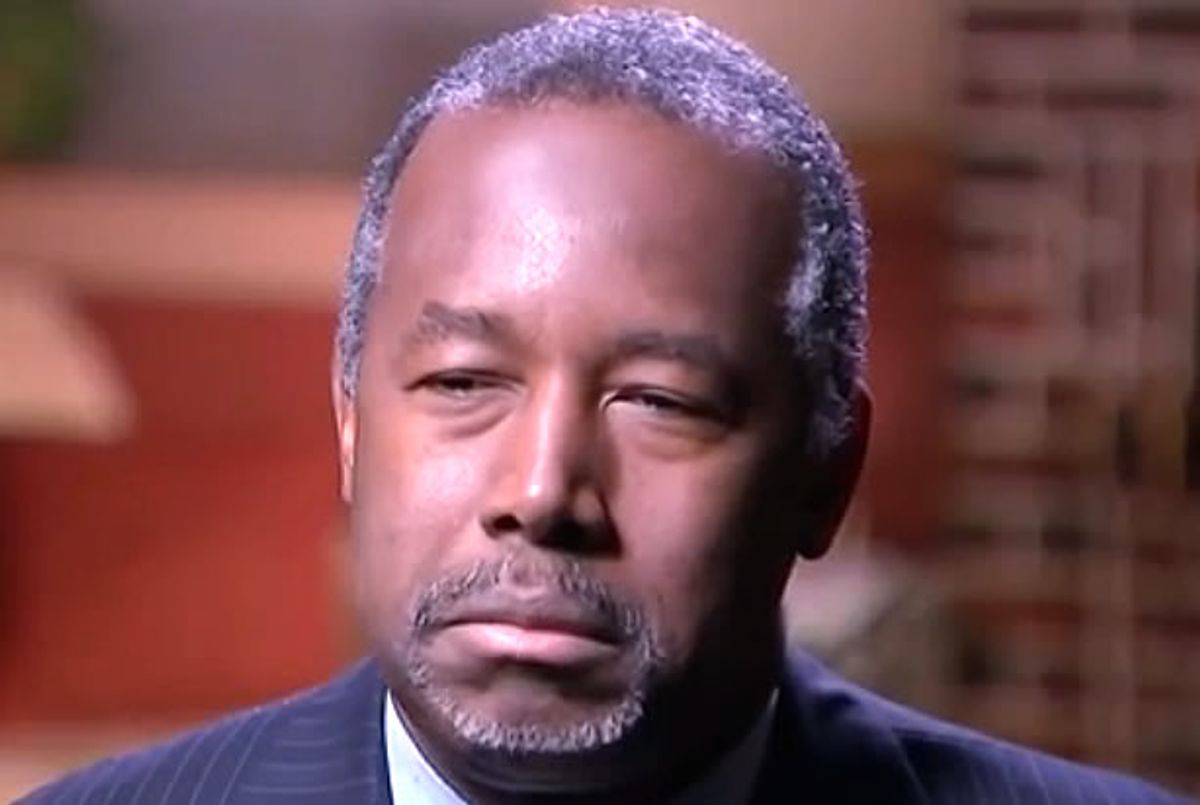 No one can top Donald Trump’s comically clueless statement this week that he knows hardship because his dad only gave him a small loan of a million dollars. And he had to pay it back! With interest! Still, the right wing is honing its comic skills and perfecting its lift-off from any semblance of reality whatsoever.

Here’s a sampling of the crazy that’s been spewed in the last seven days:

1. Ted Cruz welcomes a shout out that sane people should run from.

When Sarah Palin comes out in support of something you have said, the universe is giving you a sign. That sign means, run away! Run away!

Of course, that is not what Ted Cruz did after Sarah Palin told right-wing Newsmax TV that Cruz “schooled the media,” during Wednesday night’s debate. Cruz accused the moderators of turning the debate into a “cage match” between the candidates, and suggested it should instead be a cage match between the candidates and the big-bad “liberal media” which is, whah-whah-whah, so unfair to us Republicans.

Spanking her liberal media nemesis is exactly what Sarah Palin thinks Americans want presidential candidates to do. “The state of the media has been so poor and so unfair, this atrophying of the cornerstone of our democracy,” she lamented, for all the wrong reasons. “When Ted Cruz spanked them, they deserved to be spanked. He kinda put them in order, seemed like they kind of behaved a little better after that.”

Kinda, if you call allowing them to spew nonsensical tax and healthcare plans and lying about women’s healthcare, employment rates and climate change good behavior.

Ted Cruz thanks Palin for her shout out of support. The two most assuredly deserve each other.

As everyone now knows after that superb media-spanking performance Wednesday night, Ted Cruz is a master debater. Which is exactly what the American people want, someone who can take an absolutely absurd position and argue it forcefully and with defiant hand gestures.

Cruz performed this bit of debate magic in an interview with Glenn Beck this week. He boasted about grilling the head of the Sierra Club about the supposed lack of data and evidence for climate change, and starting from that total falsehood, told Beck, “Climate change isn’t science, it’s religion.”

"Look at the language where they call you a 'denier,'" he said. "Denier is not the language of science. Look, I'm the child of two scientists ... The essence of the scientific method is to start with a hypothesis, then look to the evidence to disprove the hypothesis; you're not trying to prove it, you're trying to disprove it. Any good scientist is a skeptic; if he's not, he or she should not be a scientist. But yet the language of the global warming alarmists, 'denier' is the language of religion, it's heretic, you are a blasphemer. The response from the Sierra Club, 'We have decreed this is the answer, you must accept it.' And so he didn't know his facts because he just knew his religion."

Men in white coats! Get over here now and haul this lunatic away!

Ben Carson is kind of a Republican superhero. He separates conjoined twins, lies through his teeth about his relationship with the shady nutritional supplements company Mannatech, and solves the problem of the drastic sea level rise that is coming our way all in a single bound, and while he is seemingly half awake. See? Superhero!

The GOP presidential frontrunner, who unlike his peers is a man of science, never lets that extensive medical education stand in the way of the fantasy world he lives in. He has previously gone on record questioning the Big Bang, evolution and gravity, and compared women who get abortions to slave-owners. This week, he unveiled his plan to deal with the watery effect of climate change.

“It is important to remember that amateurs built the Ark and it was the professionals that built the Titanic.”

Yeupp, arks. Arks are the solution to the coming flood. It’s right there in the Bible. Don’t worry. God will show you how to build them. Just as god has shown us the best tax system, tithing.

No wonder Dr. Carson seems so relaxed all the time. He knows we’re in good hands.

While Dr. Ben Carson’s healthcare plan might be summed up as, “Take these bogus vitamins I’m shilling for and then denying rather than succumb to the slavery that is Obamacare,” Mike Huckabee has something far more visionary in mind. All the diseases will miraculously be cured, and then no one will ever need healthcare again.

That loud thumping sound you are hearing is all the policy makers and all the medical researchers in history banging their heads and saying, “my god, why didn’t we think of that before? Curing diseases! We're so stupid!”

So presumably Huckabee would be willing to commit all kinds of public money to the pursuit of cures for these diseases, so we can all live happily on forever. That would be logical, right?

Nope. Presumably, prayer will solve the problem, because that’s all just about any GOP candidate has to offer when it comes to solving actual problems.

5. Jonah Goldberg declares that he is the arbiter of authentic African-American-ness.

It’s always nice to hear what a clueless conservative white guy thinks about what it is to be authentically black. Yet, clueless white conservatives are drawn to this topic like moths to the eternal flame.

National review editor Jonah Goldberg apparently failed to notice how badly singed Rupert Murdoch got by that flame recently. In a column this week, Golberg up and  boldly went where Murdoch backtracked in declaring that Dr. Ben Carson is more authentically African-American than Barack Obama. “

All of black America is surely thanking Goldberg for straightening them out about that.

Why is it, Goldberg wondered, that the media never mentions that Carson is black? Is it some kind of liberal media conspiracy? Carson’s life story is like a made-for-tv movie: Up from rough-and tumble childhood, beating poverty, anger issues and medical school, all without a single government handout!

Conservatives just cannot get over their joy that they have found a conservative black man, and he’s running for president, and he’s in the lead! Oh boy oh boy oh boy! That proves to them that they are not the ones who are racist!

Word to the wise, Jonah Goldberg. Shut up! Your man is demonstrably insane, and nobody gives a fig about your clichéd, lame-brained thoughts on black authenticity. Please shut up. We said please.