A State Dept. speech in Bahrain exposes the unbelievable depth of hypocrisy of U.S. policy in the Middle East 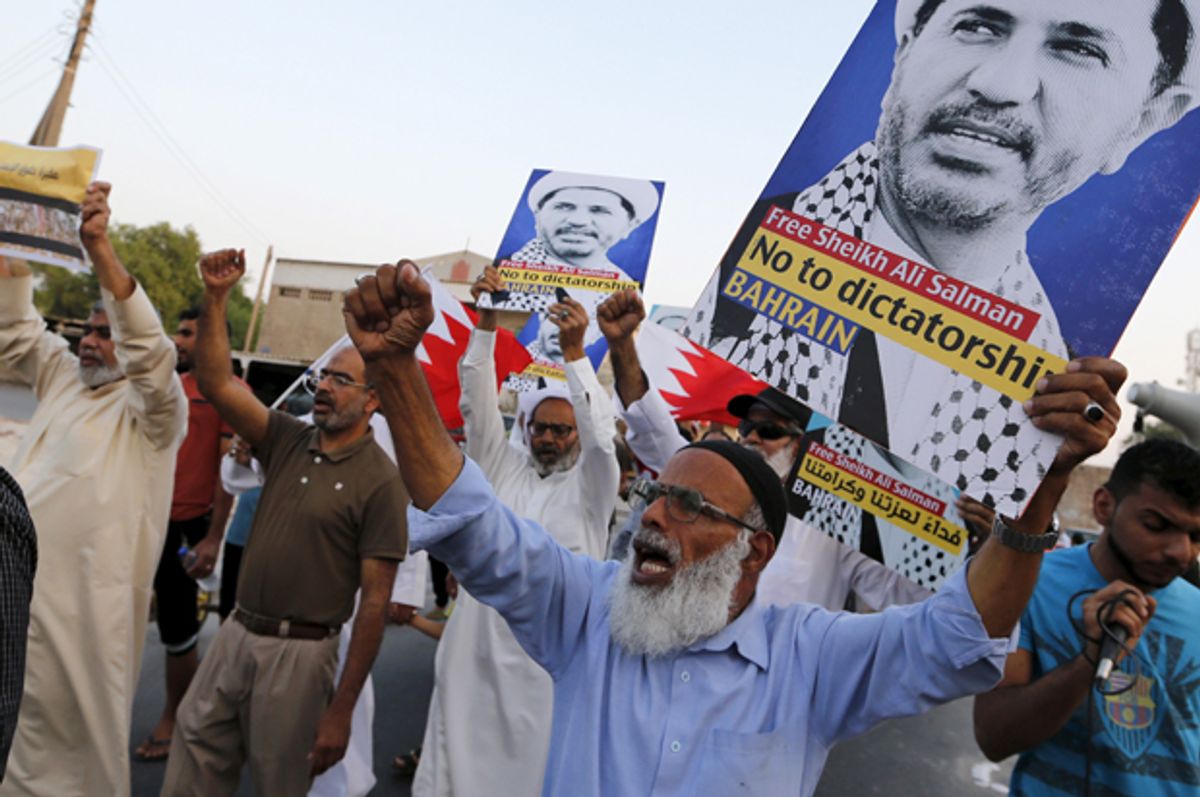 Protesters hold placards with photos of opposition leader and head of Al Wefaq party, Ali Salman, during a protest in the village of Karzakan south of Manama, Bahrain, October 3, 2015. (Reuters/Hamad I Mohammed)
--

"It is very good to be in Bahrain—a close, valued, and longstanding partner of the United States," remarked Deputy Secretary of State Antony Blinken in Bahraini capital Manama on Oct. 31.

Although a "close" U.S. ally, Bahrain is a tyrannical monarchy. It brutally represses pro-democracy activists and imprisons peaceful political opponents. Amnesty International reports the Bahraini government has for years continued to "stifle and punish dissent and to curtail freedoms of expression, association, and assembly." The human rights organization furthermore notes that Bahraini authorities maintain "a large degree of impunity amid continuing reports of torture of detainees and the use of excessive force against protesters."

Human Rights Watch has documented the same widespread violations of human rights, and warned that "American silence on the subject" makes political change "less likely, to the detriment of Bahraini citizens, global norms against torture, and American credibility as an advocate of human rights."

Mere days before Blinken's address in Manama, under strong criticism from these leading rights groups, the Bahraini monarchy imprisoned prominent activist Zainab al-Khawaja for insulting the king. This is not the first time al-Khawaja has been imprisoned for her peaceful human rights work, and her father is serving life in prison for leading pro-democracy protests in 2011.

Nowhere in his almost 3,000-word speech did Blinken mention Bahrain's egregious human rights record. The Secretary did, however, thank the monarchy for its oil.

"Our engagement today is grounded by our deep and enduring commitment to the Middle East and to its people. This region is home to some of our oldest and closest friends and allies," Blinken explained. He continued: "The region's oil supplies have powered industries and economies for generations since the Gulf prospectors first struck oil in Bahrain in 1931. And while we are now more energy sufficient, Middle East oil continues to drive the global market, and we remain determined to secure its supply."

Here, the State Department admitted that U.S. support for tyrannical Gulf monarchies is rooted in access to oil. Gulf countries have some of Earth's largest oil reserves and, given the small size of many of them, are among the world's most oil-dense nations.

Elsewhere, the State Department has also insisted that the monarchy "plays a key role in regional security architecture and is a vital U.S. partner in defense initiatives. Bahrain hosts the U.S. Navy’s Fifth Fleet and participates in U.S.-led military coalitions."

The U.K. sees the same strategic interest. Hours after Blinken's presentation, the British government announced the beginning of the construction of its own Royal Navy base in Bahrain.

Yet these are by no means the only problems with what Blinken said. The Secretary's speech in Manama further exposes the unbelievable depth of hypocrisy of U.S. policy in the Middle East.

"We're expediting sophisticated military sales," Blinken boasted in the disquisition, "including recently announced F-16 support to Bahrain; some of the most advanced ships in the world for Saudi Arabia to patrol the Gulf; air and missile defense systems to UAE, Qatar, Oman, Saudi Arabia, Bahrain, and Kuwait."

All six of these Gulf countries are repressive monarchies. In these U.S.-backed Gulf regimes, denizens face years in prison -- or sometimes execution -- for insulting the king, demanding democracy, or selling drugs. Many of these monarchies exploit 21st-century slave labor too.

Blinken furthermore affirmed support for "our Gulf partners" in their war on Yemen, which has left over 5,000 people dead since March. According to the U.N. and human rights organizations, these "Gulf partners," led by Saudi Arabia, have carried out brazen war crimes in Yemen, and are responsible for approximately two-thirds of civilian casualties.

Days before Blinken's speech, the Saudi-led coalition bombed a Doctors Without Borders hospital in Yemen to rubble. The State Department's response to the attack was tepid at best.

Why would the U.S. Deputy Secretary of State brag about arming autocratic Gulf regimes at the very moment that they are committing flagrant war crimes in a ferocious war on Yemen, the poorest country in the Middle East? Blinken characterized the monarchies as stable governments that can counter extremism in the Middle East. The problem with this idea, however, is that these Gulf states often inspire and even support extremist groups in the region, including al-Qaeda.

Standing before the Bahraini monarchy, Blinken said that countering "the extremist forces threatening the Middle East requires building institutions legitimate and inclusive enough to unite everyone—Sunni or Shia, conservative or liberal, secularist or Islamist." He recognized that, when "nations squeeze out moderate voices, they create a vacuum filled by extremists."

Yet Bahrain is a decidedly non-secular dictatorship in which Islam is the state religion and the law is based on Shari'a. The Sunni state also greatly discriminates against the Shi'a minority, fueling violent sectarian tensions.

Blinken said the U.S. is working toward a long-term strategy "that imposes order and ensures freedom and stability" in the region -- but what about freedom in the Gulf regimes? Sure, the Gulf monarchies may be stable, but they certainly are not free.

In speeches like these, the U.S. government exposes just how hypocritical its policy in the Middle East is. It claims it wants to see democracy and secularism in the region, but it continues to prop up authoritarian theocracies.

"It has become fashionable of late to argue that the United States is disengaged from the Middle East," Blinken lamented. "It's fashionable—but it's wrong." At the same moment, the Secretary maintained that "most of the turmoil in the Middle East is not about us."

Yet it was the illegal U.S.-led invasion of Iraq that led to the disastrous destabilization and spread of extremism we are seeing today. And it is the U.S. that has historically propped up dictators not just in the Gulf regimes, but also in Egypt (Mubarak and Sisi), Jordan (King Hussein), Iran (the Shah), Tunisia (Ben-Ali), and more. Historian Rashid Khalidi has, importantly, detailed how the U.S. has also constantly prevented peace from being attained in Israel-Palestine, exacerbating the 68-year conflict.

As a solution to the problems U.S. intervention has created, Blinken naturally called for more intervention. Citing the Camp David Summit -- which Prof. Khalidi argues actually prevented peace in Israel-Palestine and solidified Israeli control over the occupied Palestinian territories -- Blinked noted "we are bringing new intensity to our security cooperation" in the Middle East.

"We are more deeply engaged today than ever before—diplomatically, economically, culturally, and, yes, militarily," Blinken proclaimed. "We have a broader definition of engagement," the Secretary added. "One that seeks to use all the sources of American power—the might of our military but also the reach of our economy, the determination of our diplomacy, the universality of our values."

The U.S. may try to wash its hands of the turmoil in the Middle East, but, contrary to the insistence of the State Department, the U.S. is indeed responsible for much of it. And its continued projection of "all the sources of American power" is only going to continue to make things worse.