Rand Paul seems bored: Does this guy even want to be president anymore?

When Ted Cruz is doing a better job being Rand Paul than Rand Paul is, something's gone awry 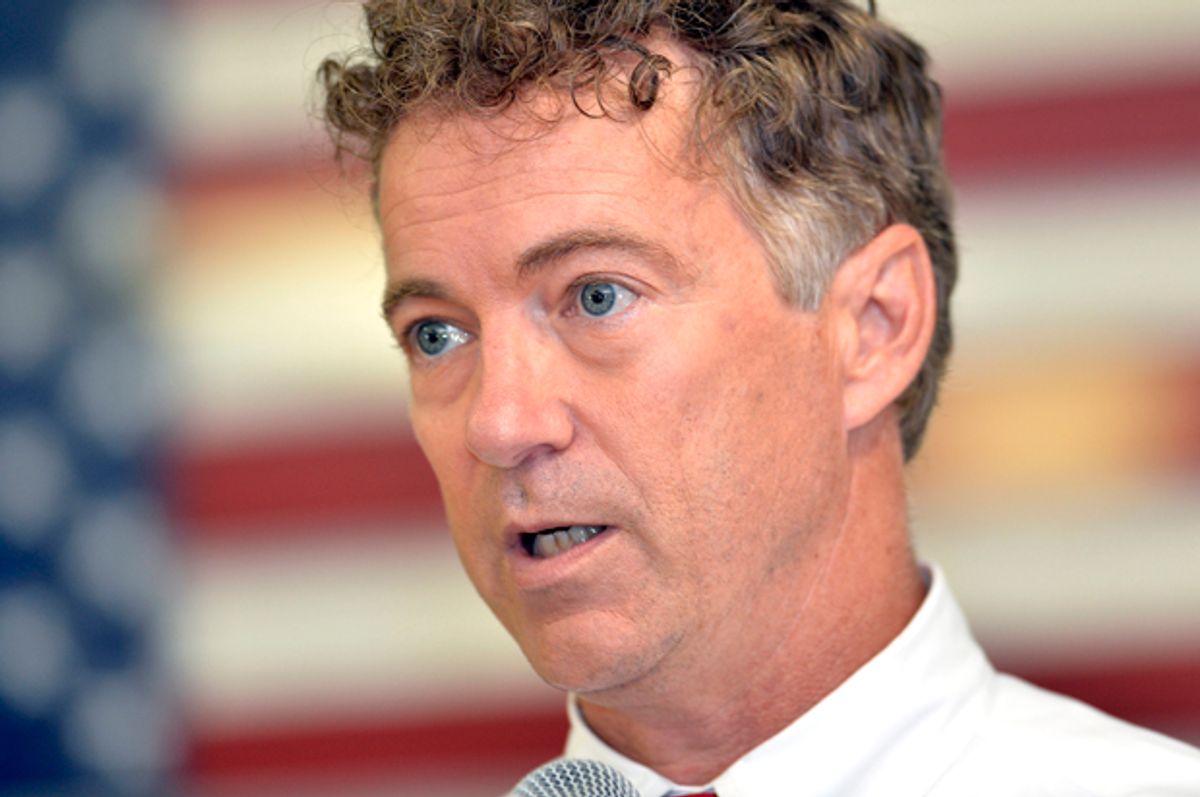 Does Rand Paul even want to run for president anymore? I mean, there are plenty of excellent reasons why he should not be running for president — bad fundraising, worse poll numbers, rising concerns about defending his Senate seat — but Rand has brushed off all of them and keeps plugging away at this seemingly hopeless quest. At last week’s debate, though, it was impossible to escape the impression that the Kentucky senator didn’t really want to be there, and didn’t want to put up with the nonsense required of a presidential candidate.

Seriously, he may as well not have even been there. For the entire two-hour debate, he logged just over six minutes of speaking time, the lowest of any candidate on stage. After answering the first question (which all the candidates were made to answer) he disappeared completely for about half an hour with nary a peep emanating from his corner of the stage. There were a few moments when the moderators remembered that he was present and asked him a question or two, and he answered them flatly. He even managed to sound dull when calling for the debt ceiling to be taken hostage “to try and reform government.”

His listlessness was an invitation for other candidates to horn in on his message, and Ted Cruz did exactly that. Really, Cruz did a better version of Rand Paul than Rand Paul did. He was the first to trot out the “audit the Fed” line that the Paul family has been belting out for two generations now, and he called for the Federal Reserve to focus on “sound money and monetary stability, ideally tied to gold.” Cruz has had some success of late in bringing Ron Paul fans to his banner, so he probably figured the debate was a great opportunity to present Paul World with a more politically viable alternative to the broke, flailing heir to the Paul legacy.

The only time Paul seemed animated was when he was promoting his latest and greatest attention-grabbing scheme: a filibuster! The deal to raise the debt ceiling was, at the time, working its way through Congress, and Paul vowed to do everything he could to stop it. “I will stand firm,” he said at the beginning of the debate. “I will spend every ounce of energy to stop it. I will begin tomorrow to filibuster it. And I ask everyone in America to call Congress tomorrow and say enough is enough; no more debt.” In his closing statement, he once again promised to filibuster this great injustice: “This is extraordinary. It’s extraordinarily wrong. You’ll see me on the floor of the Senate tomorrow filibustering this and saying enough is enough, no more debt.” He also promoted the upcoming speech on Twitter and used it as a fundraising tool.

The filibuster has done great things for Rand’s national profile in the past, so it seemed like good sense to go back to the well one more time, even though it wasn’t technically possible at that point for him to “filibuster” the legislation. Even still, marathon Senate speeches in the service of personal political ambition have proven successful for other candidates, so he may as well have given it a shot, right?

But that’s not what happened. After promising to “spend every ounce of energy” in a dramatic “filibuster” to halt the budget deal, Rand ended up speaking for less than 20 minutes. The bill passed, in spite of Rand’s perfunctory attempt to stop it.

What’s interesting, though, is that the speech, while short and ultimately pointless, is still far more interesting and energetic than anything Rand Paul said on the debate stage last week. He seemed more in his element, with more time to expound on his libertarian economic principles and no bloviating gasbags threatening to throw him in jail. It’s almost like Rand Paul is more at home in the Senate, where he can command the stage and drone on to his heart’s content about the dangers of debt, than he is on the presidential campaign trail, where he has to condense and tailor his message to appeal to an audience that may not care about these issues in the way that he does.