The GOP's big-money revolt: How Carson & Trump are challenging everything we know about modern politics

For all of their bile, you have to give Trump & Carson this: They've laid waste to conventional wisdom on elections 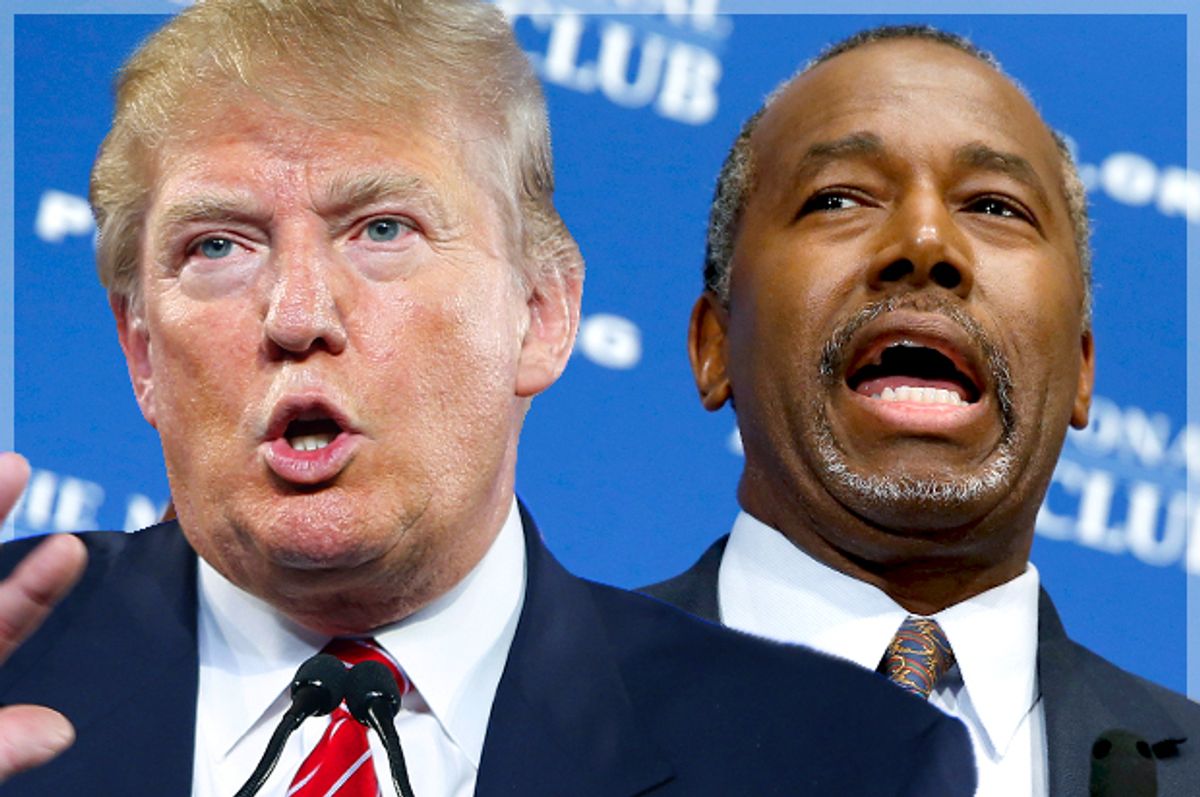 Big money has been buying American politicians for decades, and in the process ensuring that our government acts in the interests of the wealthy and well connected who fund their campaigns. We see the results in an economy increasingly skewed to benefit the one percent, a trend that has continued even under a two-term Democratic President whose central campaign theme was addressing this hope-crushing disparity.

While Obama the candidate pledged to get tough on Wall Street, President Obama has presided over a period where the biggest banks got bigger, none of the major players in the mortgage meltdown where prosecuted, and millions of American lost their homes. To this day, more than 15 million American families are living in homes where their mortgage is worth far more than the real-world value of the property. The banks were bailed out and have prospered greatly since they ripped off the country. Yet now, in a parallel universe rarely visited by the major media, these underwater families are left to their own devices.

In 2008, Goldman Sachs, Citigroup and Morgan Stanley were some of Obama’s most generous donors. In that first election cycle alone, according to the Center for Responsive Politics, Wall Street donated $16.5 million to the Obama campaign. They got what they paid for: a whole bunch of head fakes for change that, to this day, leaves much of urban America’s residential neighborhoods devastated -- cities like Baltimore, for example, with more than 15,000 vacant homes.

Despite the op-ed lamentations of newspapers and handwringing by good government groups over the power of big money to corrupt our politics, thanks to the Supreme Court’s Citizens United case, that power has grown exponentially.

But now there are portents from the Republican primary, an unlikely quarter, that a growing resentment of corporate America has gone bi-partisan. The folks leading the GOP Presidential pack are counting on grassroots support, or self-funding, while the ones with the huge contributions from places like Wall Street are struggling to stay relevant.

Exhibit A for this upside-down world is the campaign of former Florida Governor Jeb Bush. Wealthy donors rushed in to buy a piece of history by helping Bush amass a "shock and awe" campaign war chest. With more than $103 million in Bush’s PAC, and another $25 million infused into Bush’s campaign, these tycoons and scions of great wealth wanted to help contribute to the sense that Bush was inevitable.

Only 5 percent of the contributions that came into Bush’s 2016 campaign are small donations under $200, roughly $1.2 million. Of those who debated last week, only New Jersey Chris Christie had a lower rate of small contributors with 97 percent of his campaign contributions coming in the bigger donations from places like Wall Street.

In dramatic contrast, Dr. Ben Carson, a retired pediatric surgeon, had his war chest filled with small donations which made up 63 percent of his mix for a yield of $23 million. Even billionaire Donald Trump, who has pledged to largely self-fund his bid, got 48 percent of his campaign treasury in small donations.

The day after his abysmal CNBC debate performance, Bush tried to convince reporters that his campaign was very much alive by emphasizing that he still had the most money of any of the other campaigns. Ironically, in his party right now, all that filthy campaign lucre from Wall Street is weighing Bush down, just like the chains and lock boxes did the ghost of Scrooge’s partner, Marley.

As it turns, out this time around there is a kind of right-wing populism afoot that has the GOP’s ruling elite worried, because their base is finally making the connection that the interests of the folks in the sky boxes is not the same as theirs. There's been one too many stories about corporate inversions where U.S. multinationals race to be from somewhere else to cut their tax bill.

“You know, when I entered this race, all the political pundits said it’s impossible; you can’t do it because you’re not connected with the money. And there’s no way that you can raise what you need in order to compete successfully,” Carson said in an earlier debate. “In no way am I willing to get in the bed with special interest group or lick the boots of billionaires. I have said to the people if they want me to do this, please get involved. And we now have over 500,000 donations, and the money is coming in.”

While Carson has a PAC, Donald Trump has taken the unprecedented step of writing the several PACs that formed to support him and asking them to disband and return the money. During the CNBC debate, Trump challenged his rivals to end what he called the “scam” of Political Action Committees that are funded by the nation’s most powerful corporate interests.

“I will tell you," Trump said. "You had better get rid of the super PACs, because they’re causing a big problem with this country, not only in dishonesty and what’s going on, but also in a lot of bad decisions that are being made for the benefit of lobbyists and special interests.”

Throughout the CNBC debate, some of the GOP candidates made a linkage between the need to shrink big government as a check against the concentration of wealth and increasing market domination by big businesses. “The truth of the matter is big government benefits the wealthy. It benefits the lobbyists . It benefits the giant corporations,” said Senator Cruz. “The people that are getting hammered are the small businesses, the single moms” are “the people Washington leaves behind.”

“When CEO income has risen 90 percent above the average worker, when the bottom 90 percent of this country’s economy has had stagnant wages for the past 40 years, somebody is taking it in the teeth,”said former Arkansas Governor Mike Huckabee.

Perhaps by the general election, Republicans will revert back to their ‘What’s good for business is good for America’ routine, but keep in mind it was Theodore Roosevelt, a Republican, who pushed for an outright ban on corporations contributing to campaigns.

In the battle for the Democratic nomination, Senator Bernie Sanders, an independent from Vermont, got 74 percent of his campaign cash from small donors and still managed to amass an impressive $41 million dollars. No doubt, for Sanders how he raises the money has to be consistent with the critique he’s leveling against everybody else.

By contrast just 17 percent of former Secretary of State Hillary Clinton’s campaign donations came in small contributions under $200. Clinton’s list of major donors includes behemoths like JP Morgan, Morgan Stanley, Bank of America and the law firms that they use as outside counsel. In one of the Clinton linked PAC’s Wall Street entities gave more than $370,000.

Based on the latest polling that shows Clinton’s lead widening with Sanders, it may be that the issue of big money in politics, which Sanders staked his campaign on, is of little consequence to most Democrats as long as the big money is going to their candidate.