This is 2015's most infuriating, overpraised novel: "What real person trapped in this novel wouldn’t become a drug addict?" 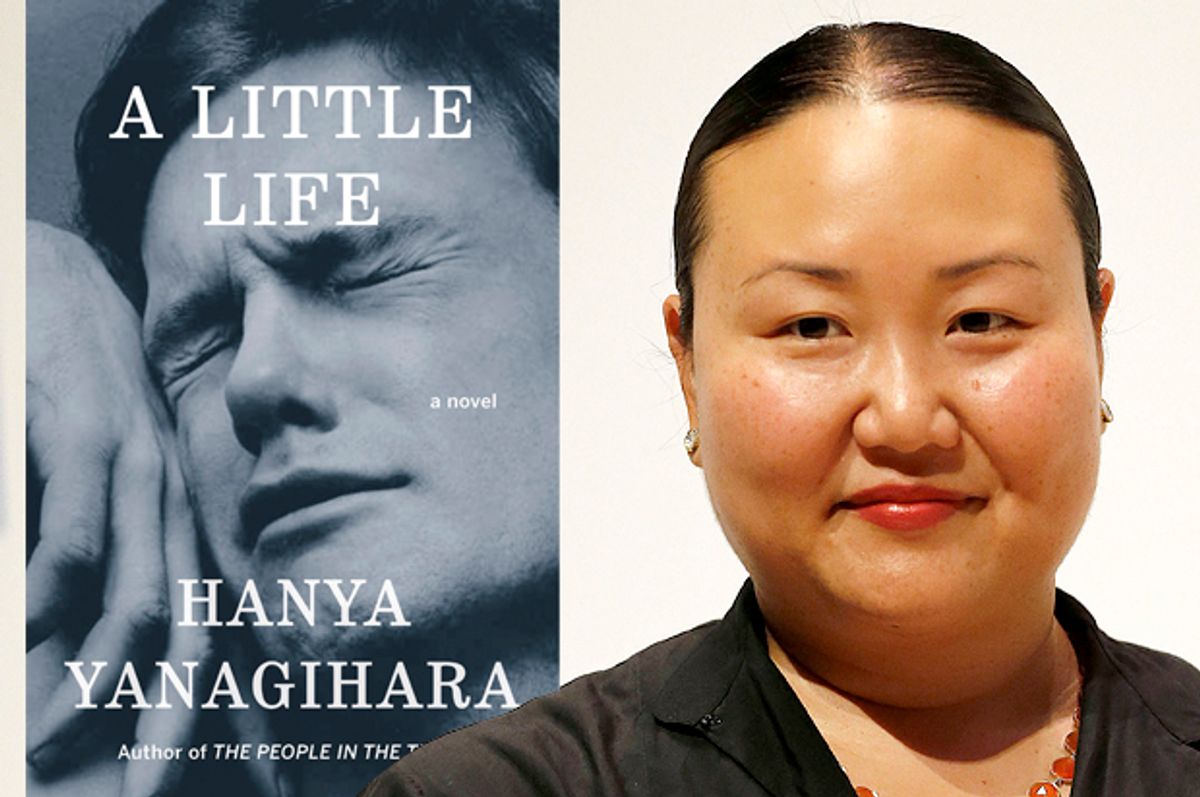 It’s useful to know on opening Hanya Yanagihara’s second novel, "A Little Life" — a month before the winner was announced, the 3-to-1 favorite to win the Man Booker Prize (ultimately won by Marlon James) — just how much research she did into the experiences and psychological background of Jude St. Francis, the book’s central character: "No," she told an interviewer, "I didn’t do any research; Jude came to me fully formed." Jude is one of four friends who bonded at an elite New England college and settled in Manhattan in their mid-twenties. The novel’s opening signals that it will be a male millennial take on Mary McCarthy’s "The Group." But something sets Jude apart from his friends. He walks with a limp, suffers from episodes of severe spinal pain and will say nothing to his friends about his life before college. He cuts himself.

The boys cruise Lower Manhattan in a flurry of real-estate scoping, gallery hopping and résumé banter. But Jude arouses the others’ protective instincts. Closest to him is his roommate, Willem, the recently orphaned son of Nordic immigrants to Wyoming. He makes his living as a waiter between auditions for theatre parts. He’s the handsome one of the bunch, a magnet for women’s attention, to which he often seems indifferent. He grew up taking care of a brother with cerebral palsy, also deceased, and he takes Jude to the doctor after one of his episodes of self-harm. The group’s rich kid is Malcolm, the biracial son of an African-American banker and his white writer wife. He has a bottom-feeder job at a fancy architecture firm, is anxious about being insufficiently black, unsure of his sexuality and creatively blocked, but he’s always there to loan his friends some cash. The least repressed member of the gang is JB, a gay Haitian-American artist on the make who gets his first show painting photorealist portraits of his friends: something of a dated style in the era of mobile phones, but then the action of the novel takes place over the course of four decades in what seems like a perpetual 2007, without reference to 9/11, the financial crisis, elections or any other external events.

Backstories sketched, vectors in place (the artist, the creative professional, the celebrity actor in the making), the focus turns to Jude. He’s an assistant federal prosecutor who likes to bake. (There’s an oppressive amount of culinary detail early on in "A Little Life": oyster mushrooms and braised tofu, gougères, herbed shortbreads, cornmeal gingersnaps, lobster, shrimp risotto, banana bread, cakes covered with fondant, duck à l’orange with kumquats, cilantro and upscale hummus.) At college he was a math whiz, and his readily provided assistance with calculus assignments may explain his friends’ loyalty, because he’s a vacuum of charisma.

Yanagihara ostentatiously withholds information about Jude’s condition, deploying phrases like "those years" and "what happened then," along with creepy references to a Brother Luke and a Dr. Traylor. The teasing became too much for me, so I flipped at random to page 398, which happens to be where the episodes of child rape start, with the 9-year-old Jude being hired out to redneck johns in motels in West Texas by a renegade Catholic monk. Satisfied, I returned to the account of Jude’s college years, when he earned the nickname "postman": "You have to be so genuinely uncategorisable that the normal terms of identity don’t even apply to you," JB says. "Like Judy here: we never see him with anyone, we don’t know what race he is, we don’t know anything about him. Post-sexual, post-racial, post-identity, post-past … The post-man. Jude the Postman." It’s a passage that makes clear his status as more a concept than a character.

Flashbacks unwinding Jude’s gothic inverted fairytale origins follow. As an infant he was abandoned naked beside a trash bin behind a drugstore in South Dakota. No local hospitals had recorded a matching recent birth, his indeterminate race made adoption unlikely, and the state authorities were off-duty. He was taken in by a local Catholic monastery as its only child ward. Though kind at first, the monks deployed severe corporal punishment and a couple of them sexually abused him. The nicest monk, Brother Luke, turned out to be grooming him, and later kidnapped him and took him on a tour of West Texas, pimping him out and using him as a personal consort. When Jude develops a habit of throwing himself against walls, Brother Luke gives him a razor and teaches him to cut himself as an outlet for his rage. One night police break down the door of their motel room, and Brother Luke hangs himself in the shower to avoid arrest. Jude winds up in a juvenile home in Montana, another site of abuse, and narrowly misses a chance at being adopted. He runs away, sells his body on the road and catches a venereal disease. He’s picked up by a john who claims to be a physician called Dr. Traylor, and promises to cure him with antibiotics. He makes good on that pledge, but also locks Jude in his basement for three months as his sex slave, for sessions with a poker. Offering release, the doctor tells Jude to get in the boot of the car, drives out into open country, tells him to get out and run, plays a game of chicken with him, knocking him down several times, then runs him over, causing Jude’s chronic spinal injuries. Jude wakes up in a hospital and tells his story to Ana, a social worker. The doctor is prosecuted and convicted. Ana recognises Jude’s academic aptitude – the monks, Brother Luke included, didn’t neglect him as a pupil – and encourages him to apply to college. He wins a full scholarship and she dies of cancer. He vows to tell his story to no one else.

"Yanagihara’s rendering of Jude’s abuse never feels excessive or sensationalist," the novelist Jon Michaud wrote. Excess, however, seems to be the point. Yanagihara has said that she sees Jude as a survivor for whom recovery from abuse is impossible. As for sensationalism, it’s true that there’s a sterile quality to her descriptions of Jude’s abuse: the phrase used is always ‘had sex’, and the only reference to male anatomy I caught in the book’s 700 pages is a joke among grad students about ‘micro-penises’. Yanagihara’s prose at the start is clean and serviceable, if dull. Her go-to flourish is the simile: the skin on Jude’s back is "an awful, unnatural topography, the skin stretched as glossy and taut as a roasted duck"; one of his wounds is "like a foetus’s mouth"; the friends themselves are "a fleet of parrots shaking their bright-colored feathers at one another, presenting themselves to their peers without fear or guile." Another of Yanagihara’s tics is to provide arbitrary credentials for characters who enter the story and vanish within the space of a sentence: "Julia’s father, a retired pulmonologist, and brother, an art history professor." But as the book plunges on through its ahistorical decades the style becomes more and more breathless, perhaps a reflection of its swelling romantic theme. While Jude’s "level of suffering is extraordinary, it’s not, technically, implausible," Yanagihara has said. "Everything in this book is a little exaggerated: the horror, of course, but also the love."
Just about everybody who doesn’t beat or rape Jude loves him: his friends; his pro-bono physician, Andy, who despite his better judgment never has Jude committed for his self-harm and his law professor, Harold, who introduces him to the wonders of contract law, gets him a clerkship with a judge and adopts him as an adult to make him his heir, as well as to fill the gap left by his own son, who died of a neurodegenerative disease. In proper melodramatic manner, Jude goes from the pits straight to, if not the top, the upper middle class. The ghastly litany of his childhood sufferings is at least coherent. Jude, an adult player in a melodramatic lifestyle novel, in which the point is to observe the way the passing of time affects the cast of characters, is static. This is the formula: insert a case of arrested development into a contemporary male version of "The Group."
The one question that remains is whether Jude will enter into an adult sexual relationship. On his first try, at around the age of forty, he takes up with Caleb, a fashion executive who proves to be another abuser and winds up invading his apartment and beating him senseless. The episode eventually drives Jude to a suicide attempt. In its aftermath, as anyone might have guessed from the start, he and Willem, now a major motion picture star, recognize that they’re more than friends. It’s not unheartwarming, but Jude’s issues remain the same as they were two decades earlier: he won’t divulge his past and he still cuts himself. By now the narration has degenerated into a series of repetitive contemplations of the scenario, alternating between Jude and Willem’s points of view. The middle-aged Jude has become a corporate lawyer who harasses whistleblowers on the stand on behalf of big pharma. Little else has changed:

He wishes he too could forget, that he too could choose never to consider Caleb again. Always, he wonders why and how he has let four months – four months increasingly distant from him – so affect him, so alter his life. But then, he might as well ask – as he often does – why he has let the first 15 years of his life so dictate the past 28.

The answer, of course, is that it’s Yanagihara’s design. That’s why it’s good to know that Jude is entirely her concoction, not a figure based on testimony by survivors of child rape, clinical case studies or anything empirical. I found Jude an infuriating object of attention, but resisted blaming the victim. I blame the author.

"A Little Life" has received some ecstatic reviews. The most intriguing of these is the novelist Garth Greenwell’s in the Atlantic, which argues that it’s the long-awaited "great gay novel": "It engages with aesthetic modes long coded as queer: melodrama, sentimental fiction, grand opera," he writes. "By violating the canons of current literary taste, by embracing melodrama and exaggeration and sentiment, it can access emotional truths denied more modest means of expression." Perhaps I’m in thrall to current literary taste, but the only character in "A Little Life" who seems possessed of anything like "emotional truths" or a sense of irony, the only supporting player in this elaborately ethnically diverse cast who doesn’t seem like a stereotypical middle-class striver plucked out of 1950s cinema, is JB. He’s temporarily ushered out of the narrative after he says to Jude: "You like always being the person who gets to learn everyone else’s secrets, without ever telling us a single fucking thing? … Well, it doesn’t fucking work like that, and we’re all fucking sick of you." JB’s also the one hooked on crystal meth. What real person trapped in this novel wouldn’t become a drug addict?