No one told me about the loneliness, the emotional roller coaster, and how to stay sane when I could only eat a spoonful of mashed potatoes

I thought bariatric surgery would solve all my problems; 180 pounds later, I realized I was wrong 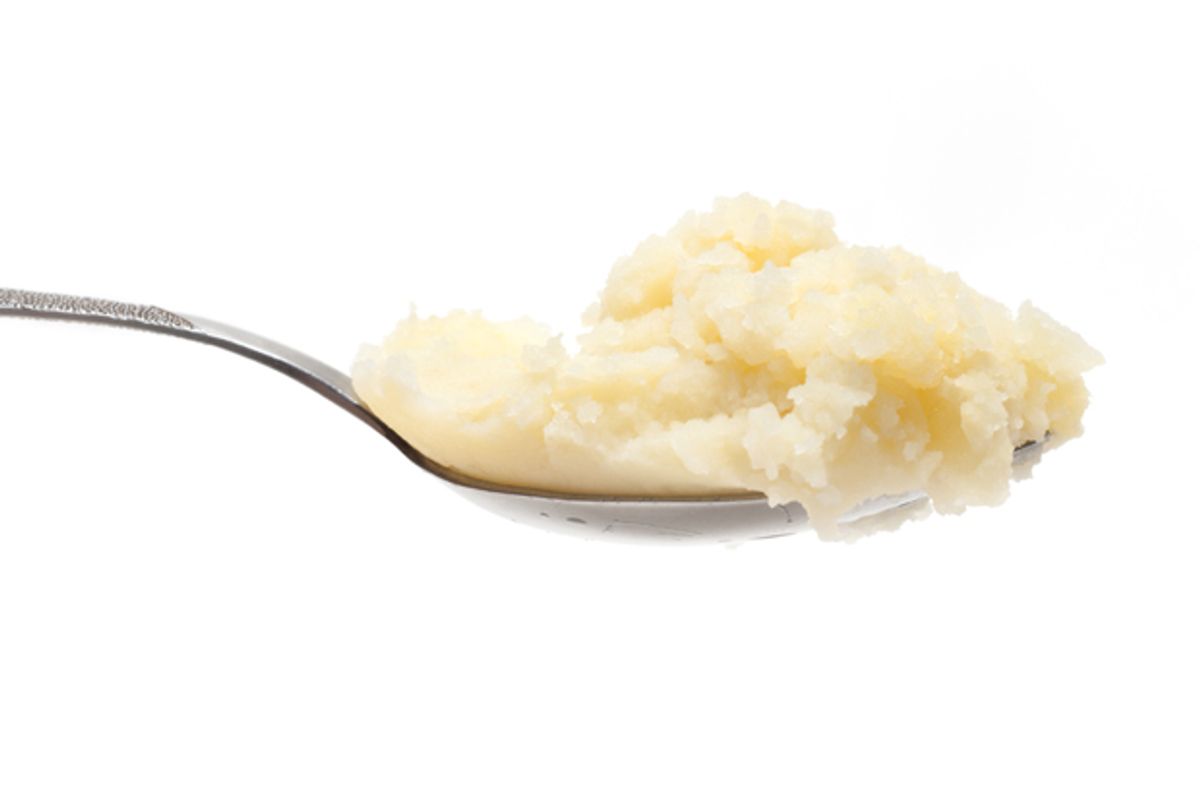 Eight years ago, tipping the scale at 314 pounds, I decided to undergo gastric bypass surgery. A skilled bariatric surgical team spent a morning in May of 2007 shrinking my stomach to the size of a walnut and rearranging my intestines to allow me to only ingest a spoonful of food at a time. 180 pounds later, I was considered a “surgical success” and released into the world of average-sized people. It was just like that scene in "The Rocky Horror Picture Show" when Rocky is debuted as Dr. Frank-N-Furter’s shiny new creation to much applause. But there was one problem: Unlike Rocky, no one was singing me a song about how to be a happy, well-functioning, average-sized human. Everyone oohed and aahed, but their approval and astonishment didn’t help me adjust. I became deeply, unconsolably depressed.

A Canadian study recently published in JAMA Surgery, led by Junaid Bhatti from the Sunnybrook Research Institute in Toronto, followed 8,815 patients in Ontario for three years prior to and three years after their bariatric surgeries. Nearly 200,000 weight-loss surgeries are performed every year in the U.S., and this new study suggests that people who have undergone the procedure are 50% more likely to commit suicide or self harm. Of the patients involved in the study, 158 had self-harm emergencies during follow-up, and 72.8% of the incidents were intentional overdoses. But what’s truly shocking about this study is that nearly all of these patients (a whopping 93%) had been diagnosed with mental illness in the five years prior to their surgery. Why weren’t these patients’ mental illnesses treated and closely monitored before they went under the knife?

When I went through the nearly year-long process of getting approval from my insurance company to have weight-loss surgery, there was very little focus on the mental health aspect of it all. Did I have a history of mental health issues? I mean, what fat teenager isn’t depressed? Not to worry! Losing weight would fix that, the doctors assured me. So I was placed on a high-protein diet, signed up for a plethora of lab tests, and attended the one required support group meeting hosted by the bariatric center—where the primary topics were types of protein shakes and post-surgical vitamins.

In the accompanying commentary of the study results, Dr. Amir Ghaferi, director of bariatric surgery at the Ann Arbor Veterans Administration Healthcare System in Michigan, admits that all patients should go through an extensive pre-surgical health screening before being allowed to have bariatric surgery. But he laments that "we don't really have a good way of screening these people. We don't have a good standard."

I had the surgery anyway, not convinced in any capacity that I was mentally unstable enough to warrant questioning from my “bariatric team.” After all, I was 21 years old and making a positive decision on behalf of my health. Size 6, here I come! No one mentioned anything about the changes that would go on in my brain, how difficult it would be to try to stay sane as I tried to get used to eating a spoonful of mashed potatoes without “dumping," and the personal relationships that could, and would, inevitably crumble as a result of my transformation.

According to Dr. Ghaferi, it is common for relationships to fail after people have undergone weight-loss surgery. It’s a lack of adaptability skills; when one partner loses weight in a relationship with another unhealthy eater, suddenly these people find out they can’t adjust to each other’s lifestyles. “I've had patients say, 'My husband left me because I got too thin,’” Ghaferi said.

A couple of years my after weight-loss surgery, my live-in boyfriend and I broke up. We were suddenly two very different people. I also did not know how to be friends with the same people anymore, and I wrote in my journal: It’s just not the same anymore. My "big change" is always awkwardly hanging around in the air, ruining whatever friendly conversation we could have about literally anything else. It’s annoying. Sometimes people would see me and say things like “Oh, I can’t believe you had that surgery. Doesn’t it make you crap your pants? Good luck keeping the weight off, I hear that rarely happens…”

And I didn’t know how to dress myself. I went from having a limited wardrobe of all-black t-shirts and size 28 pants to suddenly being able to shop in any store that sold clothing. This was a big deal; I’d spent my life shopping in one or two plus-size stores and adapted to always being excluded from patronizing the “regular stores.” Now I was flooded with overwhelming options. I did not know how to wear clothes that fit my new shape, or clothes that wouldn’t show off my loose stomach, thigh and arm skin (stretchy cottons? Forget it). So while I may have been folding myself into a size 6, I felt like I was just as awkward and doughy as before. It wasn’t the perfect self I’d imagined.

Then the depression kicked in. I simply did not know how to handle being a new person in a new body that sometimes railed against me if I ate too much sugar (see also: dumping syndrome—an ugly and often common “bonus” of gastric bypass surgery—where your blood sugar spikes and severe sweating, dizziness, fatigue and diarrhea occur after ingesting an arbitrary amount of simple carbs or sugar). I was lost, ill-equipped to deal with reality, throwing things across my living room and collapsing in panic attacks. I had loose skin. I was often anemic. On July 28, 2008, I wrote in my journal: One minute I’m fine. Then I want to scream like a banshee into the night. I hate this. I’m forced to deal with it because I can’t bury my emotions in food anymore.

Looking back, I see clearly that there is a correlation between my lack of preparation to deal with my “new life” and the depression that ensued. At my one-year follow-up appointment, I was tested for vitamin deficiencies, weighed, asked to pose for “after” photos, and sent on my merry way. I had no clue where to turn for help. I went to therapy and they gave me Klonopin, a drug used to treat anxiety disorders. A couple of times during that year, I sincerely considered overdosing on them. I can empathize with the 73% of patients that overdosed in Bhatti’s study. I felt like a shell of a person; I focused so much on becoming my “new and improved” self before surgery that I did not stop to wonder what, exactly, she was like. I’d become a total stranger to myself. I lost the only coping mechanism I’d ever known (food), and had no idea where to put my sadness. No one prepared me for the disappointment and loneliness I’d experience when I had no one to talk to who could offer anything besides a dismissive “you’re thin now, shut up.” I had no reason to be anything other than happy, right? Couldn’t I just snap out of it? I suspect that many of the people in Bhatti’s study were facing the same demons.

"Bariatric surgery follow-up is notoriously poor," says Dr. Ghaferi. "We try to maintain at least one-year follow-up with our patients, but it's hard. Patients fall off the radar. They move, or it's the type of operation where if they're doing well or doing poorly, they're not going to come see you."

So what do I do? I don’t know. This is the point, post-op, where there are no more answers. You get so far out that no one can help you anymore. You’re supposed to know everything. Like graduating from college. Here’s your diploma! Now, go away. I’m getting the feeling that I will never know how to be an A+ weight loss surgery patient.

The conclusion of the JAMA study simply underscores the fact that patients should be more prepared mentally before and after undergoing weight-loss surgery. Bariatric surgery is undeniably an effective way to combat morbid obesity, diabetes, sleep apnea and heart disease. According to the Centers for Disease Control, nearly a third of adults in the U.S. are obese—that’s about 78.6 million people. So it’s a safe bet that weight-loss surgeries are here to stay. But obesity is more than just a physical state; for better or worse, it also impacts our identities, our relationships, our lifestyles, our careers, our sex lives and our anxieties. Glossing over the fact that these issues will not simply disappear as the pounds drop off does us all a disservice—it’s glossing over the fact that the mind needs to be nurtured as well as the body, that curing the physical state of obesity only addresses one facet of a complicated problem.

Eight years after my weight-loss surgery, I’ve maintained a healthy weight. I still struggle with anxiety and body issues—but at least now I know that maybe there’s something more to this; I’m not unreasonable for feeling ill-prepared for my new life. Support is hard to come by—it’s easy to feel alone. But my own struggle only supports what these new studies make obvious; there needs to be a better system in place for people considering bariatric surgery. It should not take multiple trips to the suicide-watch ward for people to get the help and support they need.

Mollie Hawkins lives and writes in Sacramento, CA. She has written for Marie Claire Magazine, Hello Giggles, Bustle, and xoJane. Read her blog at http://www.themollienarrative.com