Marco Rubio's meritocracy myth: Helping corporations slash salaries and pocket the profits in the name of the "American dream"

Ideally the H-1B visa Rubio touts brings more skilled workers into the U.S.—but too often they're used to cut costs 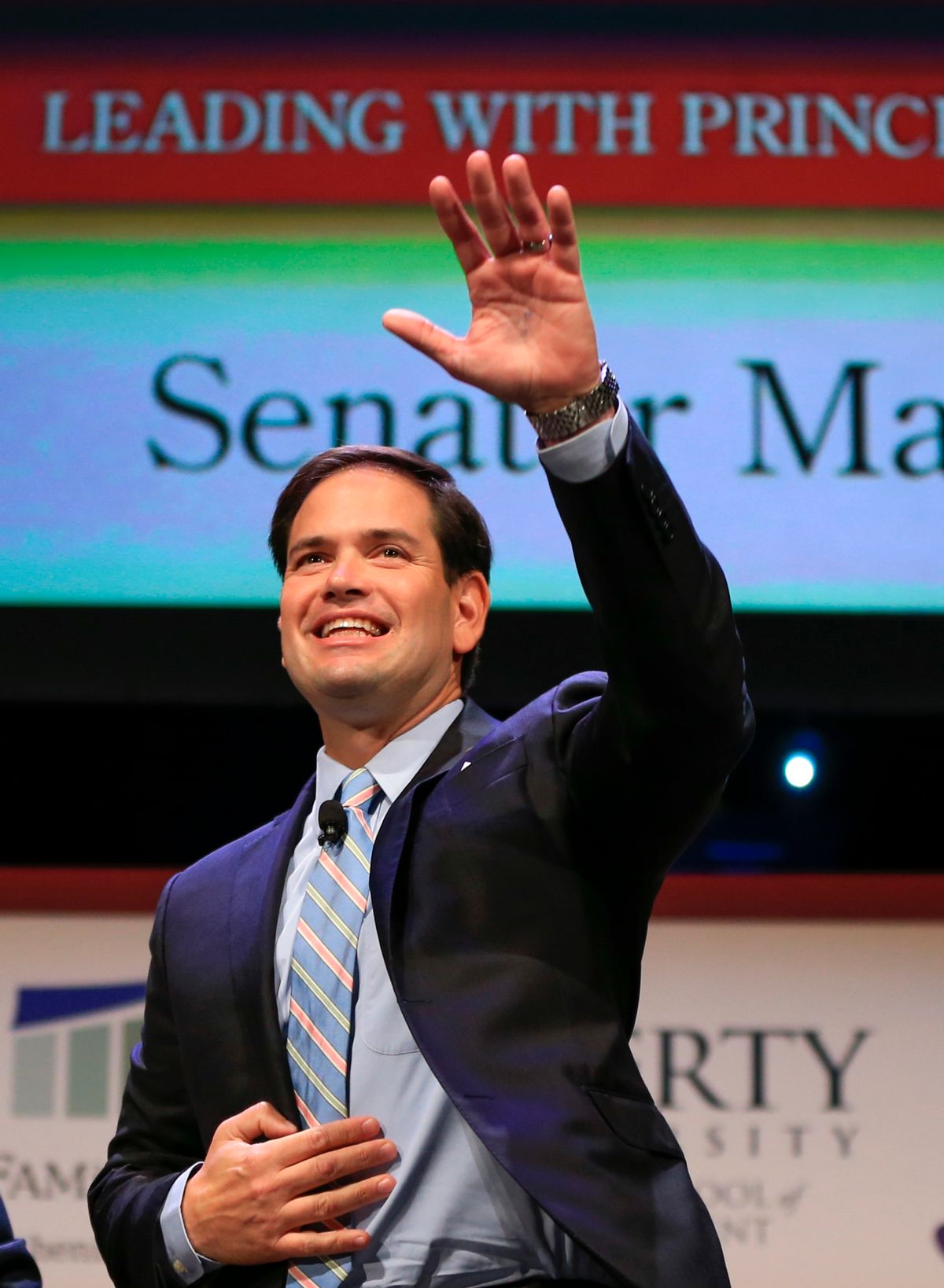 By many accounts, Marco Rubio emerged as the “real winner” of the third Republican debate. Fox News Latino reports that analysts agreed Rubio’s performance was a standout, enough to lift him up to third place in the polls after Trump and Carson. He successfully conveyed his story as the son of working-class Cuban immigrants who, a mere four years ago, owed $100,000 in student loans. Yet through a combination of pluck and perseverance, there he stood, shoulder to shoulder onstage with other Republican candidates for president.

By implication, Rubio will fight to establish policies that help everyone realize the American Dream, including immigrants and their children. Ostensibly, one of the ways Rubio plans on achieving this is by expanding corporate use of H-1B visas. Writes Ian Tuttle for the National Review:

"Marco Rubio is an enthusiastic supporter of the H-1B program. His 2013 immigration bill would have increased the annual H-1B quota by 45,000 slots, 'to fill jobs Americans can’t do.' ('Can’t'?) Although that effort failed, Rubio has resurrected the H-1B component with his “I-Squared” bill — and expanded it: The current bill would triple the number of H-1B visas to 195,000."

On its face, Rubio's message reinforces the benefits of bringing the best of the best to the U.S., in the same way that his own rise from working-class kid to the heights of national politics offers persuasive testimony that the Dream still lives. But if he’s not telling a tall tale, not exactly, he’s still spinning a story. As Jamelle Bouie at Slate noted earlier this year, Rubio is “bad with money”; the fact that the Florida senator has settled his debts seems to be less about solid financial management and more about having a billionaire as his benefactor.

It matters that Rubio had a powerful personal safety net helping him recover from his financial mistakes, Bouie explained, because the senator’s proposed policies would “shred the safety net we have for ordinary Americans” by collapsing anti-poverty programs such as the Supplemental Nutrition Assistance Program (SNAP) while simultaneously ending taxes on capital gains, a cut that would be an “extraordinary gift to the wealthiest Americans.”

Rubio’s support of the H-1B visa is similarly vexed by this pesky thing called reality. On the idealistic plane, the H-1B visa makes it possible for employers to temporarily hire highly specialized workers “in specialty occupations or as fashion models of distinguished merit and ability” when there are no qualified American workers to fill the positions. These “specialty occupations” either require unusual attributes—i.e. professional-level beauty—or a minimum of a bachelor’s degree in the sciences, medicine, health care, and so on.

Crucially, however, individuals cannot apply for an H-1B visa. It is done through business entities. And increasingly, it's done through corporations using the H-1B visa as a loophole allowing them to replace existing skilled workers with cheaper in-sourced skilled workers being brought to the U.S. in big clumps. For example, Southern California Edison laid off 400-500 employees and replaced them with workers on H-1B visas. Disney laid off 250 employees and replaced them with H-1B workers. Both companies added insult to injury by forcing the fired workers to retrain their replacements.

"Many fired workers are required to sign non-disparagement agreements as a condition of their severance. They are workers with families and bills to pay, and they are told that if they do not agree to remain silent, they will be terminated with cause, meaning they will receive no severance pay or other benefits and will face an even tougher search for a new job and a continued career. So they remain silent."

Requiring fired workers to retrain their replacements means, somewhat obviously, that the H-1B visa is not being used to hire foreign workers to perform skilled jobs that no American can do. What is true, however, is that by hiring H-1B workers, companies can slash salaries while further increasing profits because temporary foreign workers do not receive benefits.

This past July, the conservative site Breitbart.com noted that Microsoft had plans to lay off 7,800 more workers in addition to the 18,000 it had already fired, even as it was lobbying to raise the cap on H-1B visa hires. Microsoft is Rubio’s second largest donor. By rolling out the myth of meritocracy, Rubio is helping corporations exploit a disempowered global workforce in the name of shareholder profits.

With wages stagnating in the face of the lowest levels of corporate profits going to workers since 1951, the future of the American workforce is more precarious than ever. Yet the White House presents a startlingly sunny picture of “insourcing,” which is increasingly is understood to include workers brought in under the H-1B visa. The White House confines its definition of insourcing to instances that finds “large manufacturers deciding to invest in U.S. operations instead of establishing facilities in Mexico, China, or Japan.” Not only are the prodigal factories coming home, the White House.gov blog explains, but even “foreign-domiciled firms are making the decision to take advantage of American productivity and innovation” by locating manufacturing here. When all the factors are taken into account, an updated White House report concludes (these factors including “productivity,” availability and cost of raw materials, shipping and transport, volatile gas prices, and rising vulnerabilities in overall supply chains) then businesses selling to North American customers are better off basing their factories in North America. Which means the good old USA.

This overview sounds wonderfully positive, but scrape away that bourgeois veneer of cheery optimism and get down to the nitty-gritty of the thing, and it means that China’s wages are going up even as American wages are going down. The U.S. labor force has become a third world country, for the geography of the precariat isn’t defined by national boundaries, but by the banal globalization of poverty.

H-1B guest employees may seem to be actively depriving Americans of their jobs, according to anti-immigration mouthpieces, but immigrants are not the ones doing the firing and hiring. In other words, placing blame on the “foreigners” merely pulls attention away from unethical corporate practices. Back in 2011, it was the J-1 student visa that companies were exploiting as a means to bring in cheap foreign labor. By using exchange students as temporary workers, companies profited handsomely…as long as the public didn’t find out. Even then, bad press didn’t matter very much. A Hershey’s plant in Pennsylvania briefly raised eyebrows when conditions for exchange students got so bad that it made the news. Made to work full-time at a “frenzied pace” for long hours, the foreign students discovered that their earnings were being docked to pay for housing and transportation costs, leaving many with less money than when they started. Hershey’s pleaded no knowledge of these abuses, blaming the management company that oversaw the Pennsylvania plant, which likewise claimed no knowledge. Meanwhile, Hershey's profits soared, helped along by its use of actual child slaves to harvest cocoa beans in West Africa. (Its own investors sued to gain access to records about this practice. The company has promised to end its use of slavery by 2020.)

Rubio would punish companies found to be abusing the H-1B visa by banning them from ever using it again, a proposition that is laughable on its face. I like the ideal world as much as the next person, but am not prone to the kind of wishful thinking that suddenly expects to finds corporations voluntarily relinquishing such a loophole when there are no veritable consequences. Expanding the H-1B visa in its current form means strengthening our Walmart economy, which finds companies making billions in profit even as workers struggle to survive on low wages and reach for the contingent, vulnerable work of the Über economy, in which independent contractors hustle to make ends meet while technocrats thrive. He’s offering what could potentially be another giant gift for the America’s wealthy, just in time for the start of the expanded holiday retail season. Ho ho ho.