The astounding blunders of Jeb Bush: An autopsy of 2016's most overhyped campaign

Bush may limp on for a few more months. But for all intents and purposes, he's finished -- for good reason 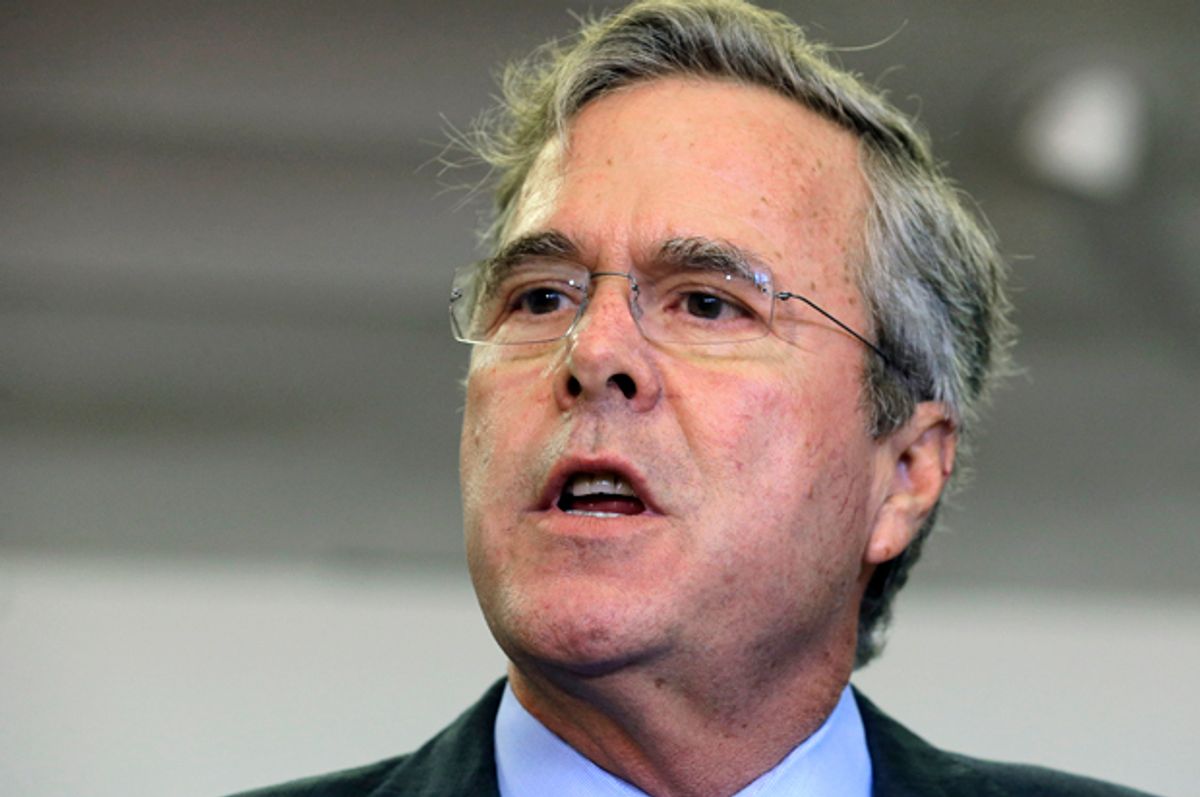 Is it not astounding? Ever since his brother left the White House, it has been talked about. Jeb Bush would run for president some day. That’s a minimum of eight years to have prepared for the past few months.  And this is the best he could come up with.

We hear a lot about how the system in place for running for president is flawed. Madly drawn out, full of shallow debates, made ridiculous by the vagueness of policy announcements, and dependent to a troubling degree on candidates’ finances. All this is true. But there is this to be said: It does have a way of weeding out the vastly unsuitable from the vaguely suitable. No matter what the faults of Barack Obama, Bill Clinton, Ronald Reagan and even of a Machiavellian figure like Nixon, no one could definitely say that they didn’t have something of the fiber needed for the job.

The one possible exception to this is George W. Bush. But a few months of his brother have almost made me pine for the comparative competence of the man who tanked the economy and mired the U.S. in wars that look more and more unnecessary with every passing year. George was at least cheerful, and had an obvious relish for the political life.

But Jeb is showing us in vivid colors what a failed campaign looks like. The drastic disaster of his campaign is the only vivid or colorful thing about him. It is a kind of master class in how not to run for president. Staff paychecks cut? Tick. Senior people leaving? Yep. Candidate caught in a downward spiral of commentary, condemned to lurch flat-footedly from one news cycle to the next? Absolutely. The Hillary Clinton campaign in 2008 looked this way, as Mark Penn’s unsuitability for his role emerged, and as Bill Clinton made increasingly furious and foolish interventions.

But this is the next level of incompetence. The moment when I realized that Bush might not even make it to Iowa was a recent internal memo sent out by his team intended to "push back" against Marco Rubio’s superior debate performance in the third Republican presidential debate. Desperately titled "Marco Is a Risky Bet," it laid into his perceived lack of experience ("No accomplishments"!) and questioned the viability of running as a youth candidate against Hillary Clinton.

Then staggeringly came the final point: "Those who have looked into Marco’s background in the past have been concerned with what they have found."

This is a grubby thing to send out. Of course, it might be that there is some gigantic skeleton in Rubio’s closet. If there is, the Bush team should say what it is. These dark hints are babyish. It’s the playground stuff that Jeb’s whole "grown-up" candidacy had apparently promised to avoid.

He’s polling 6 percent in Iowa. That he's polling 9 percent in New Hampshire, 21 points behind Donald Trump, is deemed a silver lining. How would you feel if you had donated money to this campaign? You certainly wouldn’t feel you were buying into the ear of a future president. Everything about the campaign has been queasy, irresponsible and ill-prepared.

Above all, Bush himself has shown a lack of moral fiber. For instance, he bafflingly failed to come up with any plausible attitude to his brother’s invasion of Iraq. His constant statements and revisions on this issue display a man who is uncomfortable thinking for himself. His hedging on the issue was insulting to the troops and to the electorate. He is now being punished, rightly, for failing to speak his mind about an issue of national security.

But this isn’t the only time he’s stood up and spoken, under the guise of being the moderate, safe candidate, things that are demonstrably untrue and even, in some cases, mad. For instance, there is his clear xenophobia, as when he raised the "anchor babies" issue. Seeming to have offended Hispanics, and no doubt with an eye to the Florida electorate (29 Electoral College points!), he apologized by insulting a new group of people: "Frankly, it’s more related to Asian people."

This might just be clumsy if the same tendency hadn’t been repeated. For instance, in his arrogant and disastrous debate performance last week, he challenged Rubio on his attendance record at the Senate, with: "What is this, a French working week?" Quite apart from the fact that the president of the United States is expected to have a working relationship with France, there are 11.8 million residents of French descent in the U.S.

There is no shame in not running for president, as his mother pointed out. Perhaps there’s even no shame in being rubbish at it once you’ve decided to do so. As Gore Vidal pointed out, "Any American who is prepared to run for president should automatically, by definition, be disqualified from ever doing so." It might be that he can console himself with the thought that he is better adjusted than his brother and father.

But I doubt it. It must be hard to sit around that family table without having been president. And to be forever the less talented brother would be a tough label, even in a family where the brother you’re in competition with hadn’t wrecked the world’s financial system and the Middle East.

Still, Jeb needs to get used to it. His campaign will try to reboot. But he’s already a long shot, and on what we’ve seen, that’s a good thing too.

Christopher Jackson is a London-based journalist whose work has appeared in The Hill, Politics, The Islamic Monthly, and other publications.