Amazon wants to be hated: First it kills the bookstore, then it wears its skin

Behold the brick-and-mortar monster staggering about Seattle, bellowing "data with a heart!" at bewildered readers 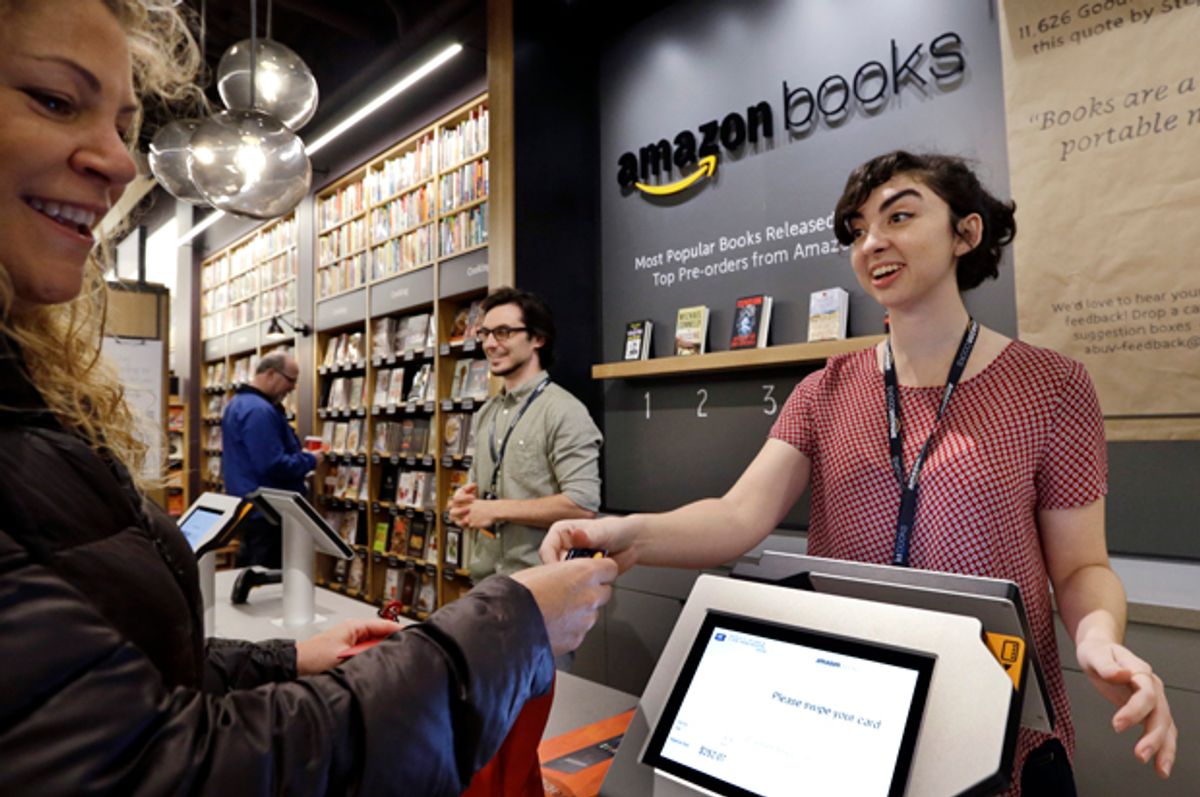 Most likely, when Amazon decided to open an actual brick-and-mortar bookstore in Seattle, it was not so much looking for a revenue generator – especially since real bookstores are more expensive to run than warehouses – but a bounce of good PR.

After all, Amazon has been denounced as a monopoly, been (justifiably) blamed for wiping out bookstores, its “fulfillment centers” have been deemed sweatshops, and its white-collar workers have talked about being abused by their employer and crying as their desks. “Losers leave or are fired in annual cullings of the staff — ‘purposeful Darwinism,’ one former Amazon human resources director said,” a much-read New York Times story reported. “Some workers who suffered from cancer, miscarriages and other personal crises said they had been evaluated unfairly or edged out rather than given time to recover.”

Amazon’s bookstore was announced at the same time as a generous family-leave policy. And while maternity and paternity leave are certainly ways of attracting talent in a tech world in which they’re increasingly common, this all smells a lot like damage control after a rash of bad press.

But so far, much of the response to the new store – which opened Tuesday -- has dwelled on the irony of it all, or confusion as to why such a hard-headed company would open a bookstore at a time in which most bookstores are struggling. (Struggling largely because of Amazon, that is.)

“Why Would Amazon Open a Real Bookstore?” US News asks in its headline. “The company's new Seattle shop has left many scratching their heads.”

“A brick-and-mortar store is antithetical to what they’re about,” J.B. Dickey, owner of Seattle Mystery Bookshop, told the New York Times. “The whole point of Amazon is getting what you want through your keyboard. What’s the point of opening a shop that demands people drive to it?”

Or, as the Seattle Times put it:

There is some irony in Amazon’s opening a physical store. For years, it could undercut physical retailers on price because it didn’t have brick-and-mortar locations. But those stores offered something Amazon couldn’t: the instant gratification of owning an item the second it was purchased, as well as the personal touch of a knowledgeable sales clerk.

And instead of having a store stocked by store employees – buyers, in bookshop parlance – the University Village store will decide what to keep on the shelves primarily by using customer reviews. (Or “data with heart,” as an Amazon vice president puts it. What it is with tech platforms and hearts these days?)

In contrast to indie bookstores in which clerks make cases for their favorite novels and poetry collections, or in which a New York Times review is pasted to a shelf, this one rely on endorsements from random Amazon customers – the enthusiasms of trevor2345 and the like. (In a faux-populist touch, the store offers printouts of raves from customers rather than testaments from store employees. Since customer reviews are wildly unreliable – they can come from author’s friends and relatives, readers feuding with the author, single-issue pressure groups, and so on, this does not quite seem like an improvement.)

It also makes you wonder: Will the store employees eventually be replaced with robots?

Social media has been even less convinced.

Maybe the whole thing will work out for Amazon: Seattle is a famously well-read city, and the people running Amazon are nothing if not smart and market-savvy. Jeff Bezos and company anticipated a shift in customer behavior that almost everyone else missed.

But let’s remember: Amazon has started several publishing imprints over the last few years, and brought in substantial people to run them. The books they’ve published have mostly underperformed, and several of the credible book-world folks enlisted have since left.

The new bookstore may fare better. But instead of provoking a bout of good vibes, the online realtor is still fighting the sense that it is a destroyer, not a savior, of literary culture.