Donald Trump's race-baiting is about to get even uglier: How he's dragging the GOP to a hideous new low

As nasty as Trump's made things already, his new attacks on Sen. Marco Rubio suggest we ain't seen nothing yet 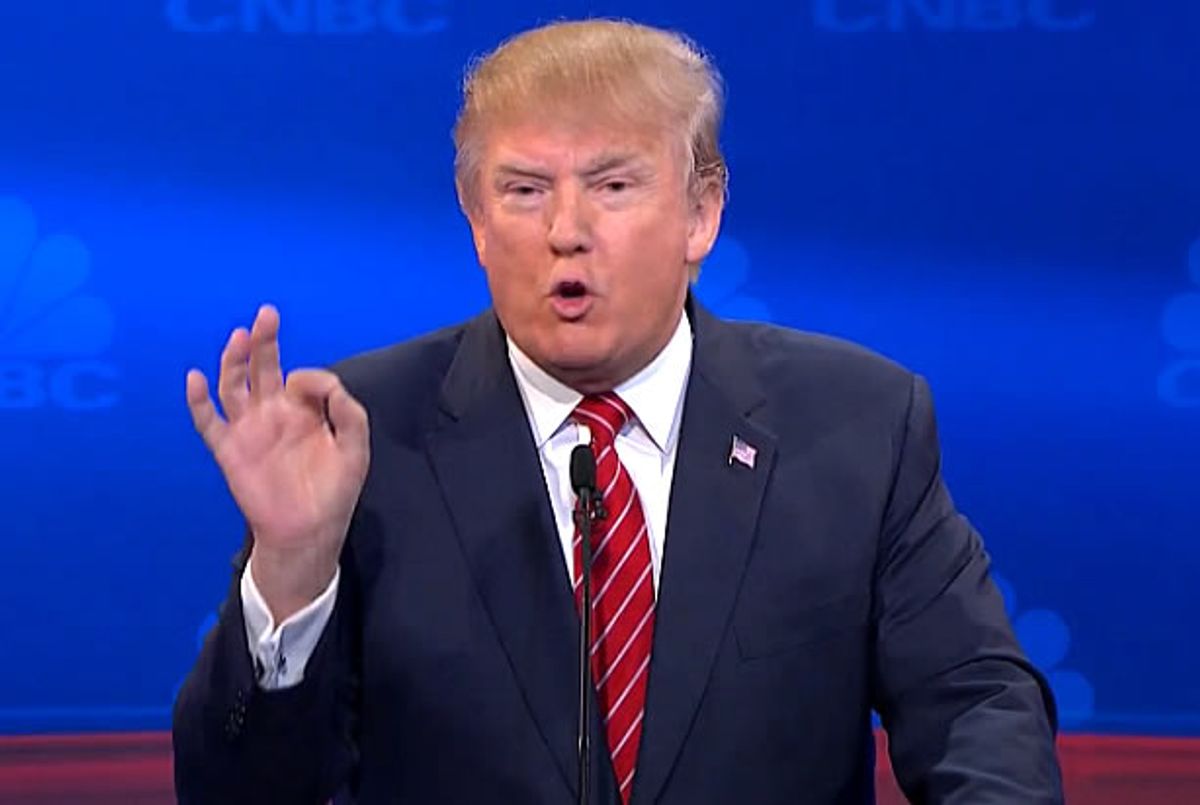 Although we are still a full year removed from the 2016 presidential election, the Republican Party primary long ago reached such depths of Know Nothing absurdity that the 2012 contest, which was widely understood to have been an extravaganza of embarrassment , is starting to look relatively dignified. Even quaint.

Yes, 2012 inspired more than a few moments when it was hard to tell if the campaign was real or an especially broad piece of satire. There was “Ubeki-beki-beki-stan-stan,” and “severe” conservatism, and warnings of the “dangerous consequences” of a simple vaccine. But for all the things he is, Newt Gingrich is not Donald Trump; when he attacks a debate moderator, he prefers to aim above the belt.

Literally and figuratively, Trump chooses a different approach. He’s been officially campaigning for president for only about four months — but what a four months! Because of him, the GOP primary has devoted significant time to discussing: whether Mexicans are rapists, whether Jeb Bush is impotent, whether Syrian refugees are ISIS, and whether there’s something wrong with Carly Fiorina’s face. He’s also questioned Ben Carson’s religion. No taboo is safe.

Yet as spectacular and unfortunate as Trump’s influence on 2016 has been already , recent developments suggest that it’s about to get a whole lot worse. Because while Trump’s campaign has already heavily relied on barely-coded racism, its targets have mainly been ill-defined groups like “illegals” or “the media.” With the notable exception of Jorge Ramos, Trump hasn’t directed his politicized and weaponized bigotry toward any one individual — certainly not one of his fellow candidates.

But now Trump is attacking Sen. Marco Rubio, the Cuban-American who may be the GOP establishment’s new favorite. And if his recent volleys are any indication of what’s to come, there may be no limit to how ugly the Republican presidential primary — which was already hideous — is about to get.

On Tuesday, it was Trump’s mockery of Rubio’s sweating that got the most notice. But as the Washington Post’s Greg Sargent pointed out, it’s something Trump tweeted that, in retrospect, may look like an omen. Along with a note saying that the senator “[c]annot be [p]resident,” Trump tweeted a link to a Breitbart article in which a reporter from the virulently anti-immigrant site criticized Rubio for opposing the immediate deportation of DREAMers (undocumented immigrants who were brought to the country at a young age).

As Sargent noted, by going after Rubio on immigration, Trump is focusing on “an issue where the Florida senator’s evasions and gyrations are already angering conservatives.” Rubio was once a major supporter of comprehensive immigration reform, and many hardcore conservatives suspect that a President Rubio would support the policy once again. But although that’s important, it doesn’t give us the full sense of the demagoguery that Trump is now flirting with.

For that, we’ll have to consider who the DREAMers are, and what it means to use them as a political target. These are young people. And most of them have lived the majority of their lives as Americans. They didn’t decide to break the rules when moving to the country — their caretakers did. For many if not most, being sent back to their country of origin would be like a form of exile. They wouldn’t be sent “home”; they’d be sent somewhere they’d effectively never been.

In short, it’s the question of what to do with DREAMers that separates the immigration hardliners from the true xenophobes. More than any other, it’s people’s response to this issue that reveals whether they see undocumented immigrants as real human beings, or whether they see them as “illegal aliens” (with the dehumanizing tint of the phrase very much intended). It’s the question that reveals whether someone sees the issue of immigration through the lens of law-and-order; or if they conceive of it as a zero-sum battle between “us” and “them.”

Basically, Trump is trying to force Rubio to have a moment like the one that sunk Rick Perry’s 2012 campaign, which, not incidentally, was also about DREAMers. Perry was getting hammered for supporting a bill that let DREAMers in Texas pay in-state tuition rates, despite their technically not being American citizens. He defended himself by saying that anyone who’d punish DREAMers for their caretakers’ mistakes was heartless. His career hasn’t recovered since.

Trump wants to compel Rubio to defend the DREAMers’ humanity, which is evidently unacceptable to the GOP primary electorate. That’s self-evidently heinous; but what makes it especially volatile is the simple fact that Rubio himself is Cuban-American. As he’s done throughout his campaign, Trump is bringing to the fore that which is traditionally left as subtext. He’s making the man who would be America’s first Latino president answer the most lizard-brained question in politics: Are you one of us? Or are you one of them?

If we think about the implications of that question, and how it’s likely to be greeted by the GOP electorate, we can have a sense of what may be in the near-future of the Republican Party. Nasty as the campaign has been already, I strongly suspect the worst is yet to come. And when it comes to predicting this year’s GOP primary, I’ve found that the most pessimistic scenario is usually the safest bet.