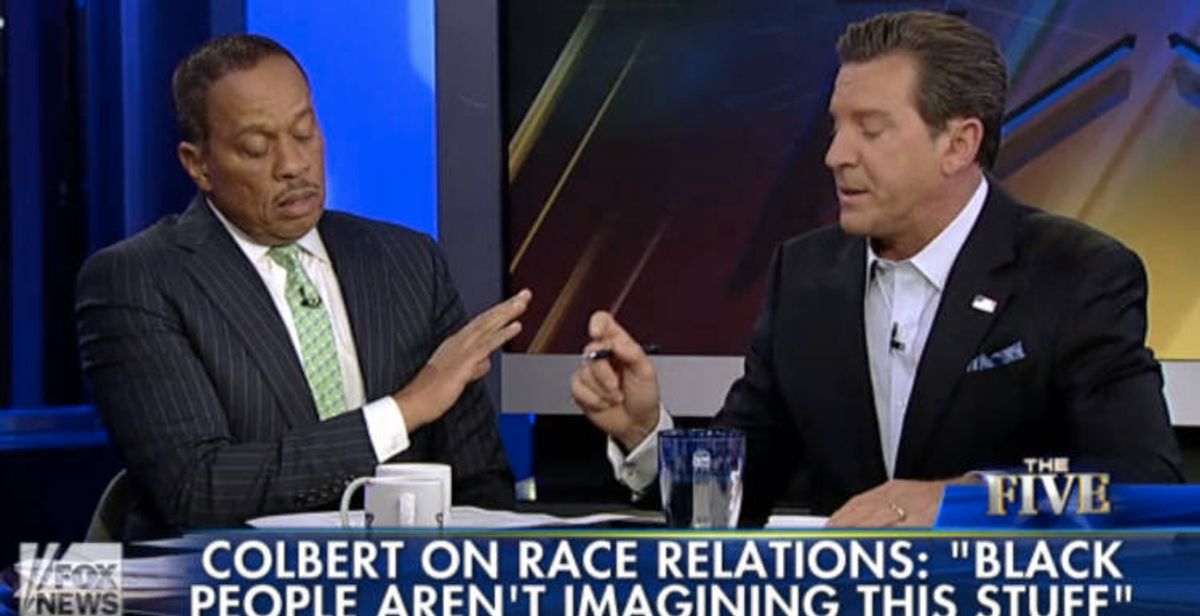 Stephen Colbert made a bit of a controversial statement this week when during his show he argued that “black people aren’t imagining this stuff," referring to the Black Lives Matter movement against police brutality and a biased criminal justice system. Of course, because Fox News has waged a war against the citizens movement, the panel of "The Five" promptly criticized Colbert for daring to lend an ounce of credence to the grievances of black activists.

"His numbers are wrong," Eric Bolling insisted on Wednesday's show. "The numbers don't bear that out," the co-host said of Colbert's tacit endorsement of Black Lives Matter. Colbert has previously caused a stir on the conservative cable news giant for wearing a wristband emblazoned with #BlackLivesMatter during the first days of his “Late Show” debut.

"The numbers bear out that at the rate at which African-Americans commit crime, it's commensurate with the amount of times that they end up dead at the hand of a cop," Bolling coldly explained.

If blacks as a group weren't so pathologically criminal than a couple of unarmed black people wouldn't have to be gunned down by police officers, the Fox News arguments goes. Bolling pointed to the relative calmness in the white community to illustrate this point.

"If you take the same rate and apply it to the white people, there are far more white people who are killed at the other end of a cop's gun."

Does that "then excuse the use of, you know, homicidal force," co-host Juan Williams, the only black man on the panel, asked.

"As Eric said, more whites are killed by police officers than blacks. So this idea that this Black Lives Matter movement is this real movement based on facts, is just not true," Watters explained to Williams.

Watch Fox News flat out deny that unarmed blacks have been disproportionately killed by officers: