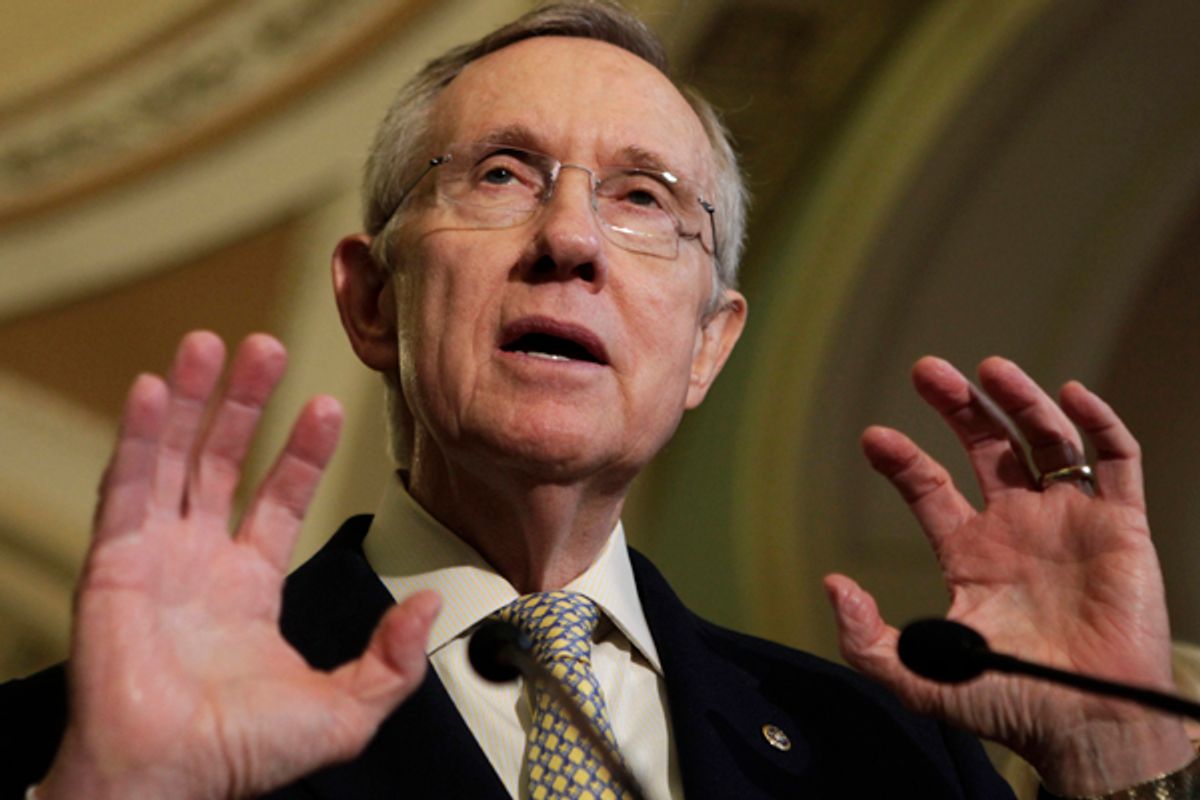 Senate Minority Leader Harry Reid ripped into "Morning Joe" hosts Joe Scarborough and Mika Brzezinski during a speech on the Senate floor today for hyping the Koch brothers' "propaganda campaign" with a softball interview this week.

On Tuesday, the MSNBC morning show aired its much hyped sit-down interview with Charles and David Koch from the billionaire Republican donors' childhood home in Wichita, Kansas.

Reid, a frequent critic of the Koch Brothers, clearly took issue with the fawning coverage and was dismayed that the businessmen were not pressed on how their political involvement has evolved to include bankrolling such minute, local issues as a zoo in Ohio to Colorado Springs' Republican-led effort against potholes.

"This Koch media tour has failed to bury one simple truth," Reid declared. "The Koch brothers are trying to buy America":

The Kochs have also procured a media that is intimidated by their billions -- too intimidated to hold them accountable. Consider yesterday's interview on MSNBC's "Morning Joe" show. This is classic, listen. Here are some of the questions that Joe and Mika asked the Koch brothers. Joe Scarborough asked, "It's hard to find people in New York, liberals -- we were talking about this before -- liberals or conservatives alike, who haven't been touched by your graciousness, whether its toward the arts or cancer research. Do you think you got that instinct from your mom?" Huh. Mika asked, "Sitting here in your childhood home" -- they were doing this interview in Topeka, Kansas -- "we have the Koch brothers, which was the good brother?" Another tough question. Joe then asked, "You guys both play rugby, right? Play together?"

"Wow, those were some really tough questions asked by the hosts of "Morning Joe," Reid said mockingly. "Most of the time, they weren't even questions, they were just compliments."

"Those questions are so easy, they may even qualify them to moderate the next Republican presidential debate," Reid continued. "It seems that some journalists are determined not to get on the wrong side of the Koch brothers and their billions."

"When the media rolls over for these modern-day robber barons as it's doing now," Reid warned, "our country's in trouble."

“We should be working to rid the system of the Koch brothers’ dark money, but this cannot and will not happen if reporters and journalists refuse to ask Charles and David Koch questions, maybe even probing questions,” Reid said. “Otherwise, no one is holding these two oil barons accountable for their nefarious actions."

Reid didn't reserve his criticism just for the Senate well, as he also took to Twitter to call out "Morning Joe" co-host Joe Scarborough specifically on Twitter:

Scarborough responded to Reid's taunting by rehashing his longstanding contempt for Reid's attacks on the billionaire brothers. During his interview with the Kochs, Scarborough asked Charles how surprised he was at "the level of vitriol leveled against you and your family, even Harry Reid calling you un-American."

Scarborough then compared Reid's calling out of the Koch's political involvement as un-American to a "Joseph McCarthy routine":

In a statement to Politico, Scarborough further responded to Reid's critique and defended his interview with the Koch Brothers:

It is easy to understand why Harry Reid is enraged by the kind of thoughtful discussions we have with our Democratic and Republican guests on Morning Joe. It was Reid, after all, who brought shame to the Senate floor last year by quoting Joseph McCarthy and calling his political opponents ‘un-American'

If Harry Reid were not so blinded by hatred toward Charles Koch, he would have noticed that Koch harshly criticized Republicans for supporting corporate welfare, called George W. Bush a failed president for running up massive deficits and reckless wars, and said that he was unimpressed with the field of Republican presidential candidates. In fact, he saved his harshest criticisms for Republicans he once supported.

Reid's unbridled rage toward the Kochs led to a failed electoral strategy that cost Democrats their majority in 2014. I can understand why he remains so bitter to this day.

Watch Harry Reid take "Morning Joe" to task on the Senate floor for failing to hold the Koch Brothers accountable for what he calls their "nefarious actions":