I signed up for a suicide hotline: What I got sounded more like phone sex

I wanted to help depressed people like myself. Instead I got "diaper man," 'incest man" and all the others 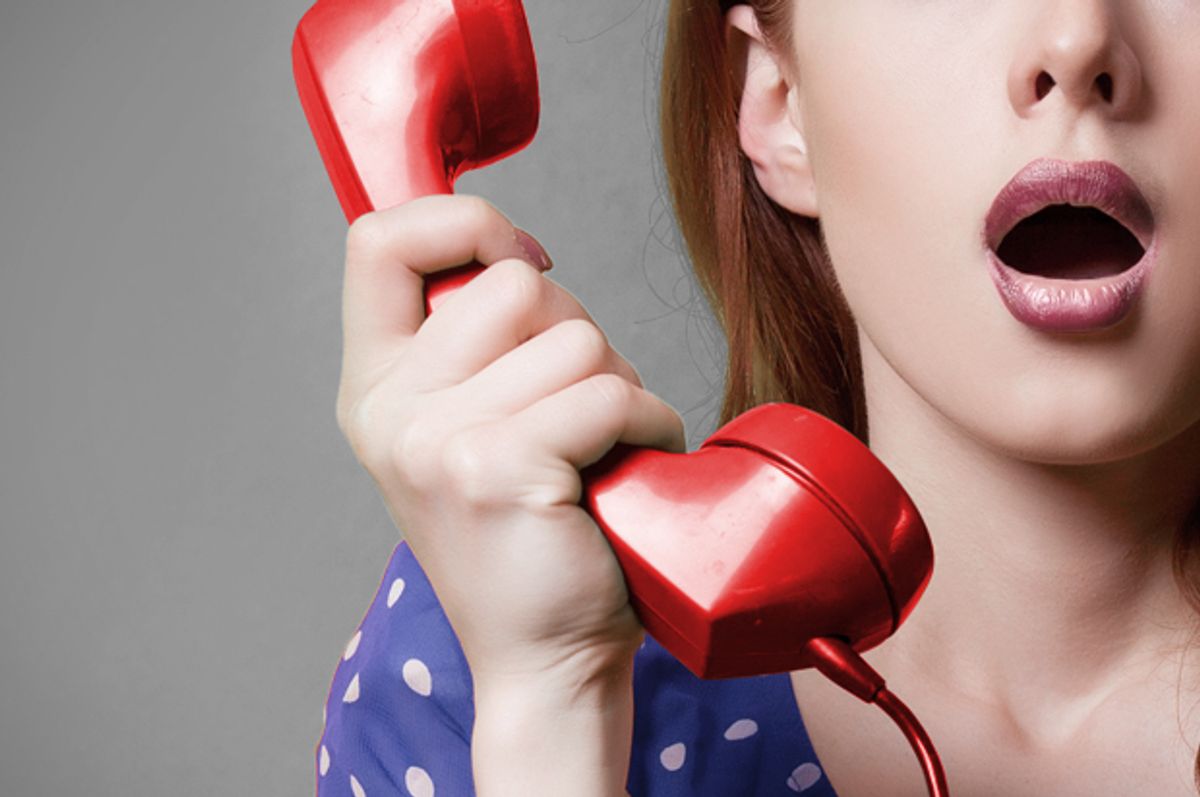 As a girl, I wanted to be an astronaut when I grew up. Or a heart surgeon. Or maybe one of those movie stars who adopted kids from third-world countries. Whatever my future career, I wanted to be glamorous, and I wanted to change people’s lives.

My interest in glamour faded over the years, but my desire to change lives grew. Perhaps that’s because I struggled to change my own. Around the time I entered middle school, an unexplainable sadness began sapping my days of pleasure. I’d simply forgotten how to feel happy. Some kids had drug-addicted mothers or violent fathers or uncles with wandering hands. I had loving parents and a house in the suburbs. I got good grades. I had close friends. I read self-help books in my spare time. But no amount of reading or self-analysis could make the sadness go away. Other people’s depressions seemed tragic and justified. Mine seemed like evidence of a deep personal failing.

My newfound interest in boys only complicated matters. I craved their attention but wilted under their gaze, hyper-aware of my own flaws. When boys did show interest in me, I wrinkled my nose and replied, “You’re kidding, right?” Needless to say, I didn’t get asked out often. Part of me preferred it that way. The random hookups and keg parties that thrilled my friends left me paralyzed with dread. They experimented with pot and LSD while I experimented with SSRIs, searching for a pill to dull my sadness.

When antidepressants didn’t work, I thought saving lives would help give my own meaning. I understood the motive behind suicide. I knew what it was like to need someone to call, even if that someone was a stranger. So the summer of my junior year of high school, I paid $135 for the training required of a suicide hotline volunteer. I received a crash course on mental illness, domestic violence and drug addiction. I memorized lists of homeless shelters and halfway houses. I learned to serve people their own emotions like roasts on a platter: You feel cautious. You feel conflicted. You feel hopeful. My youth and lack of experience didn’t matter; just my ability to parrot what I’d heard.

Senior year loomed like an encroaching storm. I had plenty of reasons to feel happy: I’d gotten accepted to college. I’d gotten a driver’s license and a hand-me-down Chevy courtesy of Mom and Dad. But the new freedoms brought more threats of social interaction, and with them, more obligations to feign cheerfulness. The suicide hotline offered the perfect excuse: “Sorry, guys. Can’t hang out tonight. I’ve got lives to save.”

I completed training in August and signed up for the Friday evening shift. Even the call center’s seedy setting—a rented one-bedroom apartment—couldn’t quell my enthusiasm. I could only enter its double-locked doors with the help of another volunteer. If I arrived while that volunteer was on a call, I waited in the dimly lit hallway, eyeing the blood stains on the stairwell and hoping I wouldn't get mugged.

In the beginning, I got to the call center half an hour early to arrange my training materials in front of me. I chatted with the volunteer from the previous shift. Then I locked the door and spent the rest of the night alone, sitting at a secondhand desk, waiting for the phone to ring. When it did, my adrenaline soared. Except the call was rarely a life-or-death situation. It was an elderly shut-in rehashing a spat with her landlord. Or a prankster on a pay phone. Or a pervert with a fetish he could confess only to a stranger.

The training had hinted at these perverts but made them seem like a rare occurrence, and I quickly discovered that they didn’t make themselves obvious.

“S’up,” one man said. Like I’d initiated the call.

“Hi. What made you call in today?”

Silence. I listened carefully for clues. Perhaps the sound of a tightening noose, or the clack of bullets into a metal chamber. I heard nothing.

“Tell me how your day went. What led up to this feeling of loneliness?”

“Eh,” he said, as if he resented my line of questioning. “Just how I feel.”

I heard voices in the background, barely audible. How could he feel lonely in a room full of people? Suddenly the tenor of the voices registered. The high pitch of a woman’s rhythmic shrieks. The low machismo of a groan. An uptempo synthesizer soundtrack.

I slammed down the receiver. With this stranger’s sexual interest suddenly hoisted upon me, I didn't know how to feel. I felt assaulted, even though no physical contact had taken place. I felt offended: How dare this guy tie up the lines when someone could be in trouble? I felt—dare I admit it?—a little intrigued.

I discovered, a month or two later, that the hotline kept files on sex callers. My disgust morphed into curiosity, and I began flipping through these files on slow nights, amusing myself with the details of diaper man who fantasized about being a baby and an incest man, infatuated with his own sister. I read the details with a mix of bewilderment and illicit pleasure. My strange sadness was nothing compared to these scandalous desires. Did the men know they were weird? Did they call because they felt guilty, or because they wanted to broadcast their fetishes to the world? What would it feel like to accept the darkest parts of one’s self? How refreshing that would be.

I’d had no idea people like that existed, and when confronted with their paper versions, I couldn’t look away. I excused my curiosity by telling myself I needed to be familiar with the details. I didn’t want to indulge them too deeply. I needed to keep the lines open to people who needed the help.

Only when people needed real help, I found myself with little to offer. One caller had been evicted and all the homeless shelters were full. Another had been discharged from the hospital and needed a ride home.

I explained that we didn’t offer that kinds of service, then suggested she speak to someone at the hospital’s front desk. I knew the words were useless before they even left my mouth, but what else could I do? Wire money for cab fare? The hotline didn’t have extra funds. And even if I wanted to send money, policy forbade that kind of contact. The woman cursed and slammed down the receiver. I sighed and glanced at the clock. I was 20 minutes into my shift. She’d have plenty of time to call back and curse some more. People often did, especially when they had nothing else to do and nowhere else to go. And I would answer and offer more cheap reassurances.

I learned a lot about the world in that rented apartment. I learned baseball trivia from a man with cerebral palsy who’d spent decades with only an AM radio for company. I learned about life in a group home for the mentally disabled. I learned my own life was paradise compared to those of our callers. It didn’t make the depression easier, but it renewed my motivation to suck it up.

I saved one life in my year on the suicide hotline, about six months after I started. A mother who seemed normal except for an overwhelming desire to kill herself.

“Please send someone,” she whispered into the phone. “I’m scared of what I might do. I don’t want my kids to find my body.”

I stayed on the line until an emergency crew arrived. We spent most of the time in silence. I told her to hang on. I listened to her cry. I prayed that my presence would be enough to keep her alive. Eventually I heard a knock in the background, and the door opening to voices. Someone took the phone and said, “It’s OK. We've got it from here.”

I thought I would feel elated. Instead I felt drained. Had I truly saved a life, or was I simply prolonging the inevitable? How many people hadn’t made the call? My desire to help had seemed so potent; so powerful. But when put to the test, I realized how helpless I truly was. If people wanted to change their lives, they’d find a way to do it. And if they wanted to end it all, they’d find a way to do that, too. I had little say in the matter. Just as l had little say in the lonely, breathless men who kept calling, night after night.

I wondered what, exactly, I was doing there. I was dreading the next few hours. Dreading the sex calls and the confrontations and the feeling of helplessness that followed me home and kept me up at night, rehashing the things I could have said.

You feel hopeless. You feel angry. You feel confused.

Only I couldn’t. I wanted to help people, just not those people. My desire to save lives had never been simple, nor had it been selfless. Like the sex callers, I’d needed intimacy that I couldn’t get in other ways. I had never trusted myself to open up to friends or lovers. Only in anonymity could I embrace my need for intimacy in spite of my flaws. But it was no longer enough. I needed to start making myself vulnerable without the crutch of a phone. I needed to start building relationships that still existed after we’d both hung up.

Kelly Kautz is writing a memoir about how depression led her to uncover three generations of dark family secrets. Read more on her blog at TheSkeletonClub.com or on Twitter @KellyKautz.