Matt Bevin won Kentucky by tying his Democratic opponent to the president. David Vitter will try the same, and fail 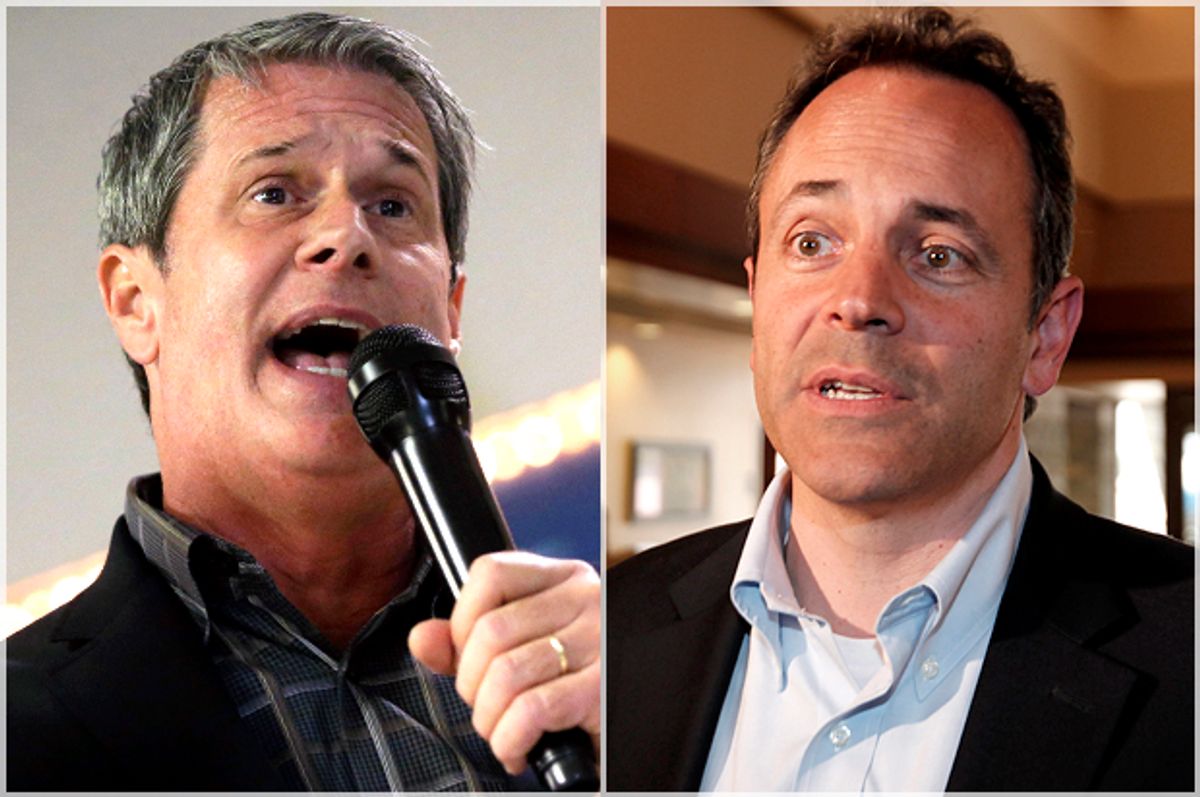 Matt Bevin was a deeply flawed Republican gubernatorial candidate in a red state with a history of electing Democrats as governor. “By all accounts,” writes Chris Cillizza in the Washington Post, “he was standoffish and ill at ease on the campaign trail, and inconsistent – to put it nicely – when it came to policy.” Indeed, so bad was Bevin that the Republican Governors Association decided to pull their ads from the state two months ago.

For the uninitiated, Bevin is a political neophyte in Kentucky who unsuccessfully challenged Mitch McConnell in last year's Senate primary. In his gubernatorial campaign against Democrat Jack Conway this year, Bevin struggled with fundraising, organizing a statewide network, and articulating a coherent vision. He alienated Republicans in his own state, promised to terminate health care for thousands of Kentuckians, and drew derision from conservatives across the country. But none of that mattered.

Despite the odds, Bevin was easily elected governor of Kentucky on Tuesday. And the reason is as familiar as it is depressing: He ran a fear-mongering campaign against President Obama. As Cillizza notes, “Obama is deeply unpopular in Kentucky. He won under 38 percent of the vote in 2012 after taking 41 percent in 2008. In the 2012 Democratic primary, ‘uncommitted’ took 42 percent of the vote against the unchallenged Obama.”

It appears Obama was sufficiently disliked in Kentucky that running against him with a “R” in front of your name was enough to win, even without a positive platform. Plenty of ink has been spilled on Bevin’s campaign already, and much more will be written in the coming days.

What’s more interesting now is the ongoing gubernatorial race in Louisiana, another red state. There are some obvious parallels between Bevin and David Vitter, the Republican candidate for governor in Louisiana. Vitter is arguably the most flawed candidates in American politics and, like Bevin, he’s increasingly disliked by Republicans in his home state.

Vitter is facing a runoff election in two weeks against John Bel Edwards, the Democratic candidate. The demographics in Louisiana favor the Republicans, as they do in Kentucky, but Vitter is facing an uphill battle. Much like Bevin, Vitter doesn’t haven’t anything positive to talk about. His legislative record is mixed at best; his political life is plagued by scandals; and his public image is irremediably tainted.

After limping into the runoff, Vitter has followed Bevin’s lead by making the race about Obama, not his record or his policies or his ideas. In a transparent and, frankly, pathetic move, Vitter’s first act after making the runoff was to release a racist attack ad. Bob Mann, a columnist for the Times-Picayune in Baton Rouge, LA, sums it up nicely:

In the spot, paid for by Vitter’s campaign, photos of President Obama and Edwards (who have never met) are cleverly melded together to appear as if they are standing side by side. In a menacing voice, the announcer warns, "Voting for Edwards is like voting to make Obama Louisiana’s next governor. Want proof? Obama dangerously calls for releasing six thousand criminals from jail. Edwards joined Obama, promising at Southern University [a well-known historically black college] he’ll release fifty-five hundred in Louisiana alone," the spot continues. "Fifty-five hundred dangerous thugs, drug dealers, back into our streets."

This is the sort of campaign political observers expect from David Vitter. He has nothing of substance to run on, so his plan is to smear Obama in the hopes that voters won’t realize they’re being a hoodwinked by a candidate looking to avoid the issues.

The good news: Vitter’s cynicism is unlikely to pay off. After outgoing Gov. Bobby Jindal’s tenure, Louisiana is deep sunk in debt. The state has a higher education system in ruins, an eroding coastline, a bloated budget, and a public health crisis every bit as bad as Kentucky’s. Moreover, Vitter has much more ground to make up than Bevin ever did: While most polls showed the Kentucky race in a statistical tie, the latest surveys find Edwards with a double-digit lead over Vitter. A simple “not-Obama” strategy won’t work in Louisiana as easily as it did in Kentucky.

Still, Vitter will take note of what happened in Kentucky this week and double-down on his Obama-bashing approach, but he’s in more trouble than Bevin ever was and the people here aren’t falling for his diversionary gimmicks.