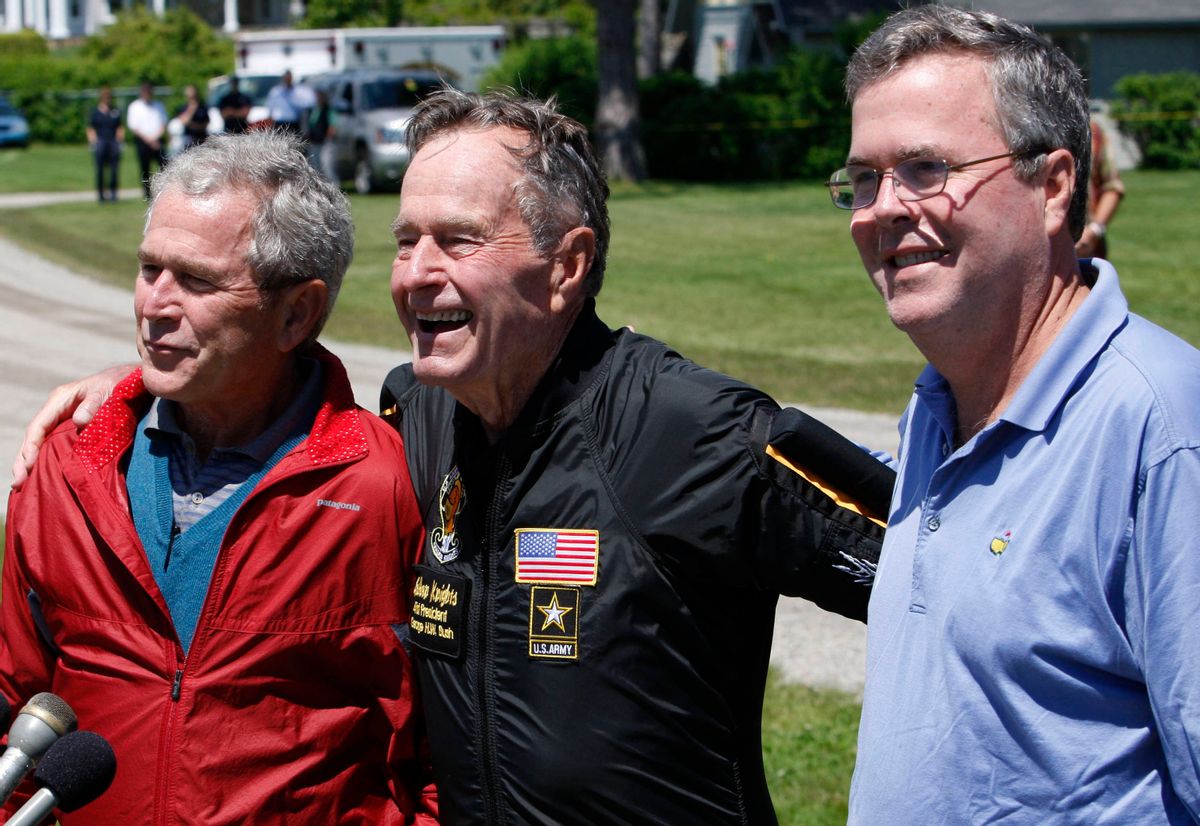 Concerns that Dick Cheney had become the real brains behind the operations during the George W. Bush administration apparently weren't just shared by critics of the White House but also by Bush's father, George H.W. Bush, according to a new biography that quotes the elder Bush as blaming his son's hawkish turn following 9/11 on Vice President Dick Cheney and Secretary of Defense Donald Rumsfeld.

The new Jon Meacham biography, "Destiny And Power: The American Odyssey Of George Herbert Walker Bush," includes new interviews with the former president as well as audio diaries from his time in the White House and according to excerpts published by Fox News, the elder Bush now sees his son's quest into the Middle East not as an attempt to continue family battles but as a move he was manipulated into making by the men whom he had installed as his closest confidantes.

"I don't know, he just became very hard-line and very different from the Dick Cheney I knew and worked with," Bush reportedly told Meacham about his son's vice president. "The reaction [to 9/11], what to do about the Middle East. Just iron-ass. His seeming knuckling under to the real hard-charging guys who want to fight about everything, use force to get our way in the Middle East."

Bush also told Meacham that he was never a fan of Rumsfeld, who served as his son's secretary of defense during 9/11. "I don't like what he did, and I think it hurt the President."

"I've never been that close to him anyway," Bush explained. "There's a lack of humility, a lack of seeing what the other guy thinks. He's more kick ass and take names, take numbers. I think he paid a price for that. Rumsfeld was an arrogant fellow."

In the elder Bush's recounting of events, the problems in his son's administration stemmed not from his performance as commander-in-chief, but from the underlings he put in place. “He’s my son, he did his best and I’m for him. It’s that simple an equation," the elder Bush concluded.

“I do worry about some of the rhetoric that was out there," Bush remarked on his son's post 9/11 presidency, blaming the rise in inflammatory rhetoric on people "around" his son. "Hot rhetoric is pretty easy to get headlines, but it doesn’t necessarily solve the diplomatic problem,” Bush said.

Bush did, however, partially blame his son for allowing Cheney to build “kind of his own state department” but reserved most of his ire for Cheney's wife.

"You know, I've concluded that Lynne Cheney is a lot of the eminence grise here," Bush said of the former vice president's equally hawkish wife, whom he described as "tough as nails."

For his part, Dick Cheney laughed off Bush's critique of his and his wife's influence in the W. White House.

"It's his view, perhaps, of what happened, but my family was not conspiring to somehow turn me into a tougher, more hardnosed individual. I got there all by myself," Cheney told Fox News.

"We smile about it, we laugh about it," Cheney said, referring to his wife, Lynne.

As for his response to 9/11 being described as "iron-ass" by the 91-year-old former president, Cheney said he "took it as a mark of pride.”

“The attack on 9/11 was worse than Pearl Harbor, in terms of the number people killed, and the amount of damage done. I think a lot of people believed then, and still believe to this day that I was aggressive in defending, in carrying out what I thought were the right policies.”

For George W. Bush, his father's feelings about how his administration was run seems to be brand new news.

“It is true that my rhetoric could get pretty strong and that may have bothered some people. Obviously it did, including Dad, though he never mentioned it,” Bush said in response to his father's quotes to Meacham.

He “would never say to me: ‘Hey, you need to rein in Cheney. He’s ruining your administration,'" the younger Bush explained. "It would be out of character for him to do that."