Slipping away in the polls, Carly Fiorina rehashes her tired attacks on feminism: "The progressive view of feminism is not about women" 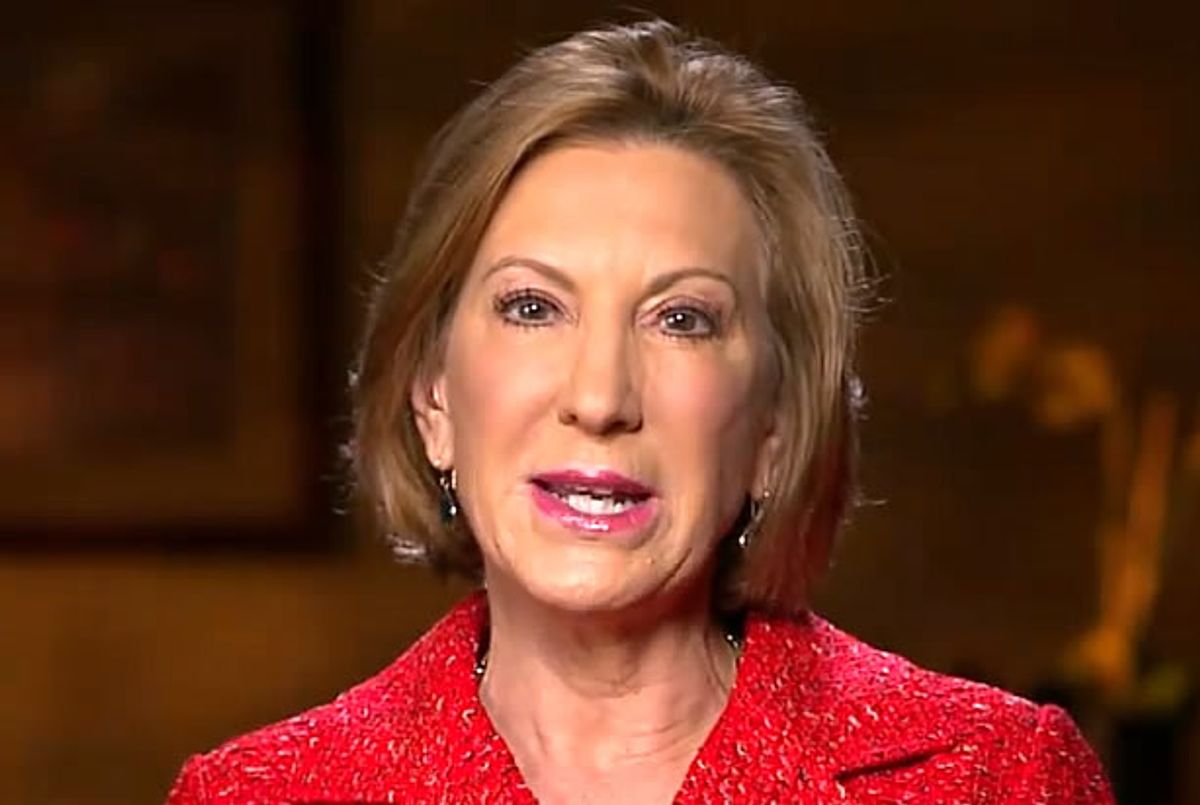 Seeing a steady decline in her second-tier standing among a crowded Republican presidential field, Carly Fiorina decided to rehash her attacks on feminism ahead of a sure-to-be contentious face-off with the ladies of ABC's "The View" on Friday.

“Over the years, feminism has devolved into a left-leaning political ideology where women are pitted against men and used a political weapon to win elections,” Fiorina wrote on her Facebook page today.

“The View” hosts caused a bit of controversy when they mocked Fiorina's appearance during last week's CNBC debate.

“She looked demented,” co-host and comedian Michelle Collins said of Fiorina. "Her mouth did not downturn one time.”

“I wish it was a Halloween mask,” co-host Joy Behar said, remarking on Fiorina's face. “I’d love that.”

The comedians have since defended their remarks by pointing out that they've been equally as harsh on Donald Trump's appearance.

“As a comic, she means ‘demented’," co-host Whoppi Goldberg said in defense of Collins. "I think as a comic we have to stand up for the words we use.”

Fiorina has since been invited back on "The View" to confront the hosts and will appear Friday morning. “None of these liberal women scare me,” Fiorina told Fox News on Monday. “My message to the ladies of "The View" is ‘Man up.’”

Now, in a new Facebook rant, Fiorina has decided to once again take aim at feminism, in an effort to prime her supporters ahead of her appearance.

"Feminism began as a rallying cry to empower women — to vote, to get an education, to enter the workplace," Fiorina explained. "But over the years, feminism has devolved into a left-leaning political ideology where women are pitted against men and used as a political weapon to win elections."

"Ideological feminism shuts down conversation — on college campuses and in the media," Fiorina argued, doubling down on her longstanding attacks on feminsim, and noting that "only 23 percent of women identify with the term feminist" to discredit it:

Feminism began as a rallying cry to empower women — to vote, to get an education, to enter the workplace. But over the...

Elsewhere on Facebook, however, two other prominent women shared much more positive thoughts on feminism today.

18-year-old Nobel Prize laureate Malala Yousafzai sat down for an interview with Emma Watson during which she credited the young "Harry Potter" star with giving her the courage to proudly embrace the term feminism.

"After hearing your speech I decided there’s no way and there’s nothing wrong by calling yourself a feminist," Yousafzai told Watson.

Conceding that “it has been a tricky word," Yousafzai admitted that she was at first hesitant to identify with the term.

"I’m a feminist and we all should be a feminist because feminism is another word for equality," the young peace activist said.

Into Film Festival opening Q&AToday I met Malala. She was giving, utterly graceful, compelling and intelligent. That might sound obvious but I was struck by this even more in person. There are lots of NGOs out there in the world doing great things... But if there were one I would put my money on to succeed and make change on this planet, it would be hers. (The Malala Fund). Malala isn't messing around or mincing her words (one of the many reasons I love her). She has the strength of her convictions coupled with the kind of determination I rarely encounter... And it doesn't seem to have been diminished by the success she has already had. And lastly…She has a sense of peace around her. I leave this for last because it is perhaps the most important. Maybe as a result of what she has been through? I personally think it is just who she is…Perhaps the most moving moment of today for me was when Malala addressed the issue of feminism. To give you some background, I had initially planned to ask Malala whether or not she was a feminist but then researched to see whether she had used this word to describe herself. Having seen that she hadn't, I decided to take the question out before the day of our interview. To my utter shock Malala put the question back into one of her own answers and identified herself. Maybe feminist isn't the easiest word to use... But she did it ANYWAY. You can probably see in the interview how I felt about this. She also gave me time at the end of the Q&A to speak about some of my own work, which she most certainly didn't need to do, I was there to interview her. I think this gesture is so emblematic of what Malala and I went on to discuss. I've spoken before on what a controversial word feminism is currently. More recently, I am learning what a factionalized movement it is too. We are all moving towards the same goal. Let's not make it scary to say you're a feminist. I want to make it a welcoming and inclusive movement. Let's join our hands and move together so we can make real change. Malala and I are pretty serious about it but we need you. With love, Emma x#HeNamedMeMalala #notjustamovieamovement Malala Fund Into Film