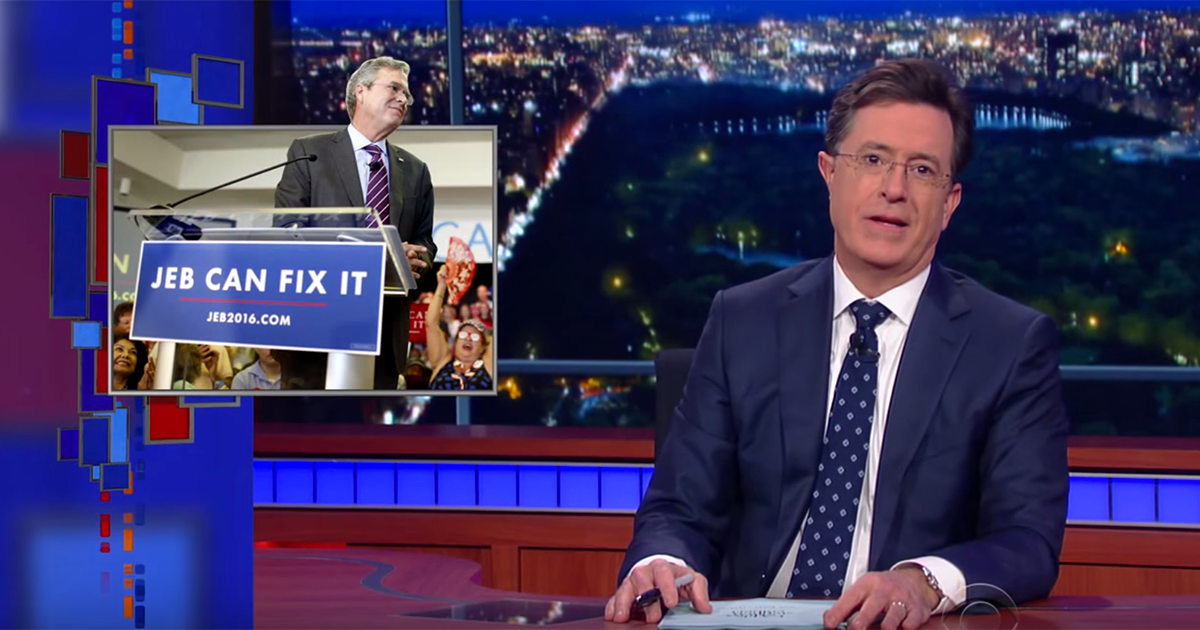 Stephen Colbert has Donald Trump's new book, and he's not afraid to use it. Wednesday evening on the "Late Show" the comedian was eager to talk about the way that Trump puts the country in such high regard with his new book Crippled America: How to Make America Great Again. "Crippled America is just a terrible phrase that sounds deeply offensive. Kind of like 'President Trump.'"

Colbert has opened the book, mainly because he doesn't want to look at the cover anymore, and it is full of things that most have already heard from Trump in his speeches, "with little extras like, punctuation." But it's apparently worth picking up, just so you can then throw it across the room as Colbert does.

Trump isn't the only candidate out with a book, however. Colbert says that Jeb! just released a new eBook called "Reply All," a perfect book to illustrate "that you're done making mistakes by naming it after something people do by accident." Colbert said it's great Jeb! is taking the initiative to try something different because it seems like his campaign is sleep walking. "Admittedly, it is a strategy that is working for Ben Carson."

Now that Bush is announcing his new slogan "Jeb Can Fix It" Colbert says it is reassuring. "Just like when you're captain gets on the speaker and says, 'Uhhhh, this is your captain speaking. Just wanted to say that I swear I know how to land a plane. Ok?' But no matter how tough it gets, don't count Jeb! out. Because he's a fighter!" Colbert then ran a clip of Bush saying he eats nails in the morning and then he has breakfast.

Bush went on to stumble his way through questions about adversity talking about how he knows he's got to get better. It inspired Colbert to create his own version of what a Jeb Bush State of the Union speech would be like.