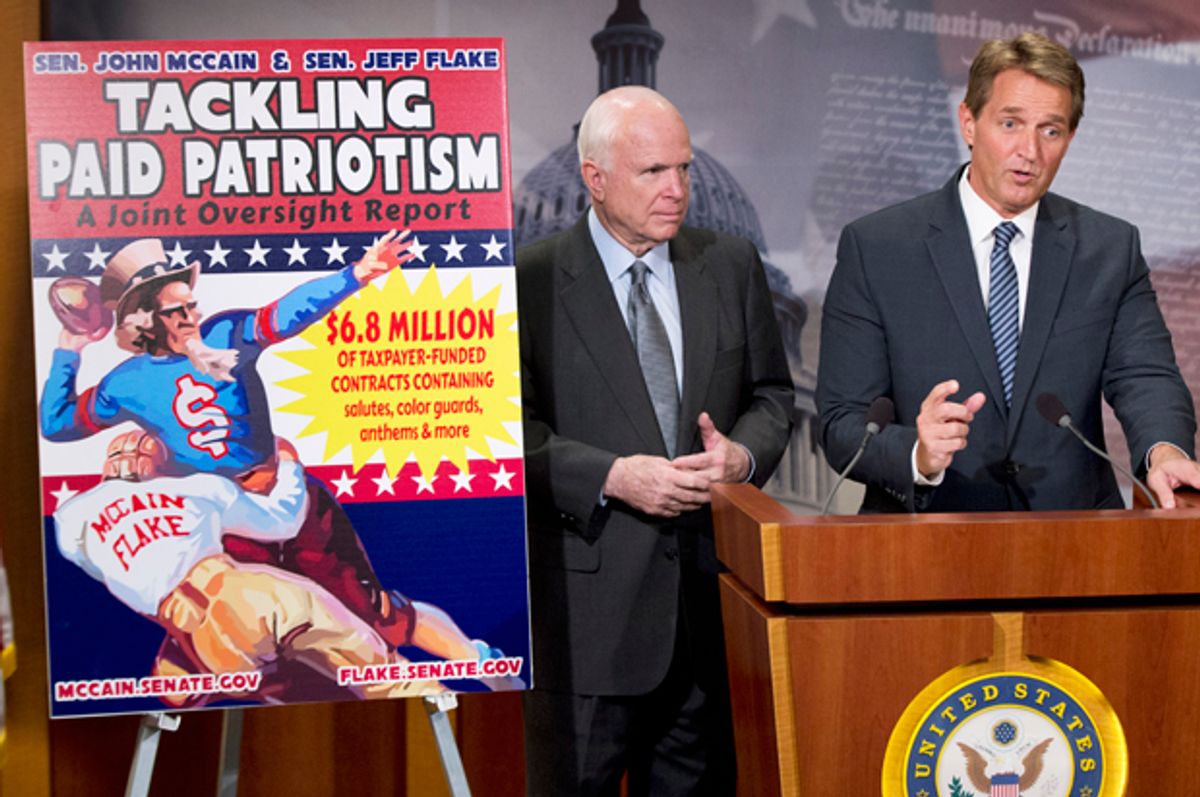 A new report released by Arizona Senators John McCain and Jeff Flake exposes just how prominent this is. Titled "Tackling Paid Patriotism," the congressional investigation provides insight into just how closely linked professional sports franchises and the U.S. military are.

Senate reports tend to be rather humdrum compositions. McCain and Flake may however now have the dubious distinction of releasing the best cover to a congressional inquiry ever made. It portrays a burly athlete, clad in a jersey emblazoned with the senators' names, tackling a football-wielding Uncle Sam, who wears an argent dollar sign on his uniform.

What is inside the colorful cover is even more striking. According to the senators' investigation, the Department of Defense (DOD) spent $53 million on marketing and advertising contracts with sports teams between 2012 and 2015. More than $10 million was paid to teams in the National Football League (NFL), Major League Baseball (MLB), National Basketball Association (NBA), National Hockey League (NHL), and Major League Soccer (MLS). And at least $6.8 million tax dollars went to pay sports franchises to spread pro-military propaganda.

McCain and Flake called this spending "wholly unnecessary and a waste and abuse of taxpayer funds." Their report is directed at the American denizen ("Dear taxpayer," it begins), and, in it, the senators express dismay that "unsuspecting audience members became the subjects of paid-marketing campaigns."

In their investigation, the senators documented 122 DOD contracts with major league teams, totaling more than $10 million. In the majority (59 percent) of these contracts, the DOD directly paid for "patriotic tributes," including game sponsorship, military appreciation nights, welcome-home promotions for soldiers, on-field color guard performances, enlistment and reenlistment ceremonies, performances of the national anthem, full-field flag details, ceremonial first pitches and puck drops, and more. Some of these acts of paid patriotism amounted to "little more than a taxpayer-funded boondoggle," McCain and Flake remarked.

Downright corruption was also documented in some cases, with the military buying luxury seats at sports games for officers and soldiers. The Air Force paid the Cincinnati Bengals for 60 club-level tickets. On a military appreciation night, the National Guard paid the Boston Bruins for a luxury box for 18 people and an executive view suite for 25 people. The National Guard also paid the Indianapolis Colts for a luxury suite, autographed items, pre-game field visits, and cheerleader appearances.

Perhaps most concerning of all is the fact that, according to the report, the DOD does not know exactly how many contracts it awarded or how much it spent. McCain and Flake noted the department has a "complete lack of internal controls for awarding, managing, and overseeing these contracts," condemning the "DOD's inappropriate and frivolous spending on paid patriotism activities, as well as the gifts, tickets, and other perks in each professional sports team contract we identified."

The DOD did not, well, play ball with the congressional investigation. In its official response to the senatorial inquiry, the department accounted for just 62 percent of the contracts and 70 percent of the spending documented in the investigation. Moreover, McCain and Flake said they were "concerned" that, numerous times, the contract summaries the DOD provided were inaccurate, downplaying the amount of money the department spent and obfuscating what exactly it was spending that money on. In some cases, the DOD even completely omitted some spending from its reports. "Such conduct in connection with congressional inquiries for information is unacceptable," McCain and Flake declared.

In spending all of this money spreading pro-military propaganda, the DOD was hoping to inspire Americans to join the military and augment recruitment. In one case of many, at a 2014 game, the National Guard paid the Seattle Seahawks for the "opportunity for up to 10 soldiers to re-enlist pre-game on the field." McCain and Flake blasted the DOD, saying they found "the tactics used by the military services questionable."

The senators were not angry about attempts at recruitment, but rather the methods of recruitment. On the contrary, they strongly encouraged "tributes to our soldiers" at public sports events. What angered McCain -- who is notorious for being a proud war hawk -- and Flake was that they felt these displays of patriotism were not genuine, but rather cynical acts of commerce, "cast under the pallor of marketing gimmicks paid for by American taxpayers."

The DOD and NFL previously denied working together to spread pro-military propaganda, but this report shows their claims to be false.

After pressure from the Senate, the DOD has agreed to ban paid patriotism, and the NFL has called on all clubs to stop participating in it.

The close ties between the U.S. military and professional competitive sports, however, will likely continue.