"An urban island of batsh*t crazy": Welcome to the capital of crazy corruption -- a Connecticut city which re-elects its felon mayors

"Sometimes you have to grab what you can grab when you can grab it." That's practically a mantra in Bridgeport 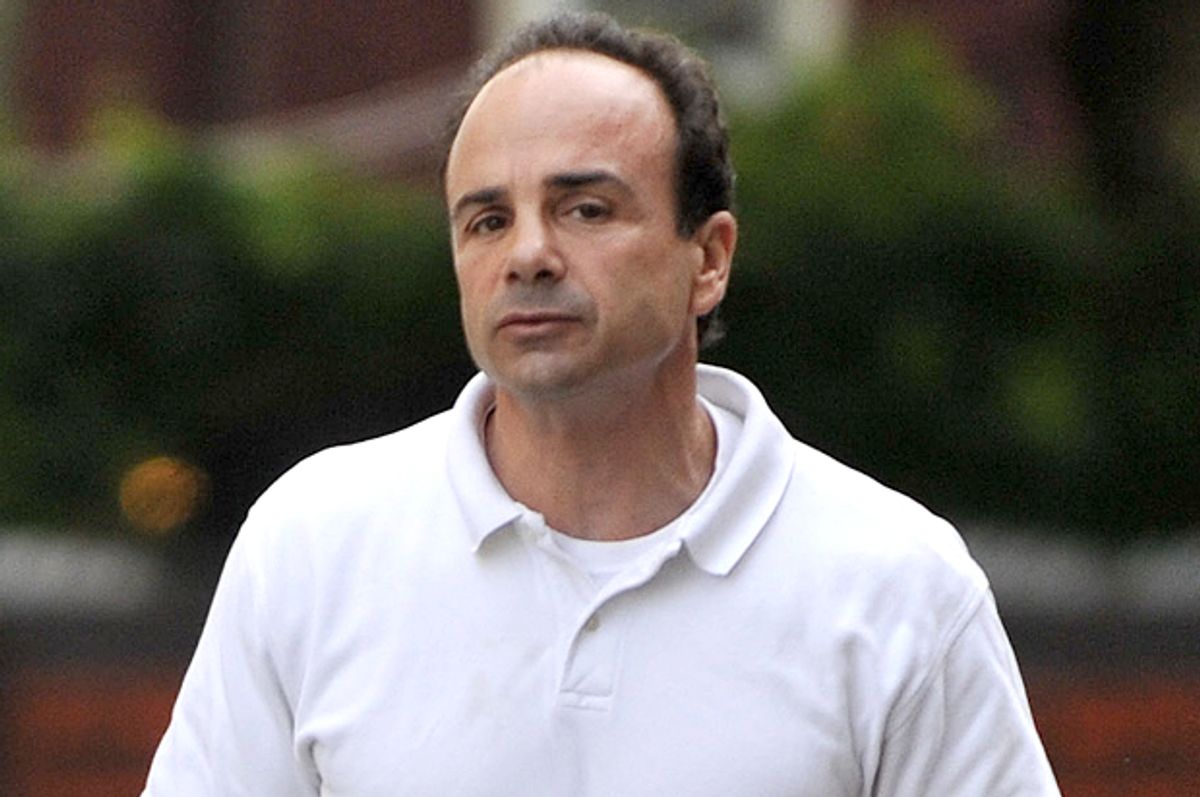 One persuasive argument for the suspension of civil liberties is that it might be possible to ban the playing of “Eye of the Tiger” at rallies for corrupt politicians and other horrible people.

As things stand, however, the anthem from “Rocky III” was blasting when Joe Ganim ascended stage Tuesday night, having taken back a job -- mayor of Bridgeport, Conn. – that he had previously lost in an especially tawdry corruption case that landed him in prison for seven years.

As the garish Survivor tune blared, a guy in the back of the room said, “Hey, they’re playing my song!” He was Joe Santopietro, the former mayor of Waterbury, Conn., who did 4.5 years for corruption. It’s kind of beautiful, the way the ex-offender pols in Connecticut support one another. When Santopietro got out of the joint in 1996, one of the featured guests at his homecoming rally was William Rado, a former mayor of nearby Naugatuck (yes, the city where Naugahyde was born), another veteran of the revolving door from mayor to convict and back to mayor.

Two of Ganim’s foot soldiers during this campaign have been former state representative Christina Ayala who has been arrested at least three times and most recently plead out on charges related to voter fraud, and former state senator Ernie Newton, who did five years on corruption charges, got out, ran again, and got convicted for campaign finance violations. I’m pretty sure that, at one point, Ganim, Newton and former Providence mayor Buddy Cianci were all in the same prison. Good times!

In one of the campaign’s countless surreal moments, Ganim went door knocking and encountered a woman who was sure she wouldn’t be allowed to vote for him because of a prior. She told Ganim she was off parole, and he counseled that her suffrage could be restored. As reported by the Connecticut Mirror, a nearby voice piped up, “You’re right, Joe, you’re right.” It was Newton. These guys know the intersection of criminal and electoral law the way you know the drive to work.

Underlying that story are some serious points about how Ganim came back, but first we need to drag a little more scenery on stage.

Bridgeport is an urban island of batshit crazy. No outsider, including me, really understands it. The mayor who took over for Ganim in 2003 held a press conference in 2006 to announce that he had abused alcohol and cocaine during his tenure but “it never, ever affected my job performance.” For 22 years, the mayor of Bridgeport was Jasper McLevy, who ran as a Socialist back in the days of the Palmer Raids.

The must-read for devotees of city news is Only in Bridgeport, a blog run by the amusing Lennie Grimaldi, who did 10 months in the joint as a confederate of Ganim and who, at Ganim’s trial, testified that the mayor had told him, “Lennie, sometimes you have to grab what you can grab when you can grab it.”

That grabbiness lent the mayor’s trial a QVC quality. Ganim was convicted of grabbing $500,000 worth of no-nos, and a lot of that took the form of expensive wines, jewelry and bespoke clothing. The feds hauled three cases of French wine into court, put a Chinese tailor on the stand and entered a $105 necktie and two $130 custom shirts into evidence. All that was missing was Vanna White.

One of Ganim’s big supporters in his 2015 run was Ed Adams, the retired FBI agent who placed a lot of the bugs that brought him down in 2003. By October, Adams was openly feuding with Michael Wolf, another ex-FBI guy who worked Ganim’s case and was gobsmacked by the unfolding renaissance.

That’s another thing about Bridgeport. People have feuds. And their feuds have feuds. Ganim’s two opponents for the Democratic nomination were incumbent mayor Bill Finch and Mary Jane Foster, who have openly hated each other for years, for reasons apparently connected to Foster’s role as a vice-president of the University of Bridgeport, which Finch disliked because of its ties to the Rev. Sun Myung Moon.

Ganim won the city primary. He had the backing of longtime party boss Mario Testa and the endorsement of the police union (because the cops had been feuding with Finch). Both Foster and Ganim had, as a back-up measure, secured ballot lines as petitioning candidates in the general election; but Finch thought it would look weak to be seen packing a parachute. So he got cute. He and his minions set up a dummy party with a fake candidate, a used car salesman who had agreed to step aside. Then Finch’s team misread the law and didn’t move him onto the ballot line by the deadline.

Suddenly, the incumbent mayor, Ganim’s most formidable foe, had no way to run, except as a write-in candidate. In an especially humiliating episode, Finch met with the Republican nominee, Enrique Torres, and asked if he, Finch, could have Torres’s ballot place. Torres was the Rodney Dangerfield of this cycle. Later, Foster’s campaign manager would also publicly ask him to drop out of the race to clear the field for her.

Finch strongly resembles Leslie Nielsen as Sgt. Frank Drebin; and if Foster reminds you of the kind of pleasant-looking white lady who typically turned up in 1980s commercials about “ring around the collar,” squeezing the Charmin and Kodak film, that’s because she was in commercials for all of those products plus about 200 others.

Bridgeport is a minority-majority city. Black and Latino people make up more than 70 percent of the population. Ganim is not a person of color, but he ran like one, campaigning hard in minority neighborhoods. Finch and Foster, meanwhile, ran as what they are, symbols of a faltering white rear guard.

Each also failed to understand what happens when you hammer an opponent as an “ex-con” in a poor city full of people of color, few of them left untouched by the modern epidemic of hyper-incarceration.

Ganim wasn’t really like them. He wasn’t a guy whose ticky-tack drug bust snowballed into a failure to appear and a probation violation from a rolling stop. He was a former bigtime white collar criminal. But he could at least convince potential voters that he knew what it was like to go through hard times, to take it on the chin from The Man, to struggle to get his life back together.

Ganim’s other message was that his glory days – his 12 years as a dynamic young mayor pulling a downtrodden city off its knees – were a more significant narrative than his sorry days as Lafite-sucking grifter.

Bridgeport has a terrible self-image. Ganim persuaded voters to buy into his somewhat exaggerated myth about a Camelot over which he once presided and which he could bring back to life again.

Finch, through clenched teeth, supported Foster as the last best hope against Sauron. Ganim mopped the floor with her, by an almost 2 to 1 margin. “And the last known survivor stalks his prey in the night and he’s watching us all with the eye of the tiger.”

You could say it was the utter collapse of political order and civic standards.

Or you could say forget it, Jake. It’s Bridgeport.