Move over, "Girls" — Aziz Ansari's "Master of None" is the new definitive millennial comedy

Netflix's new comedy is an intimate, tragicomic look at being young and privileged 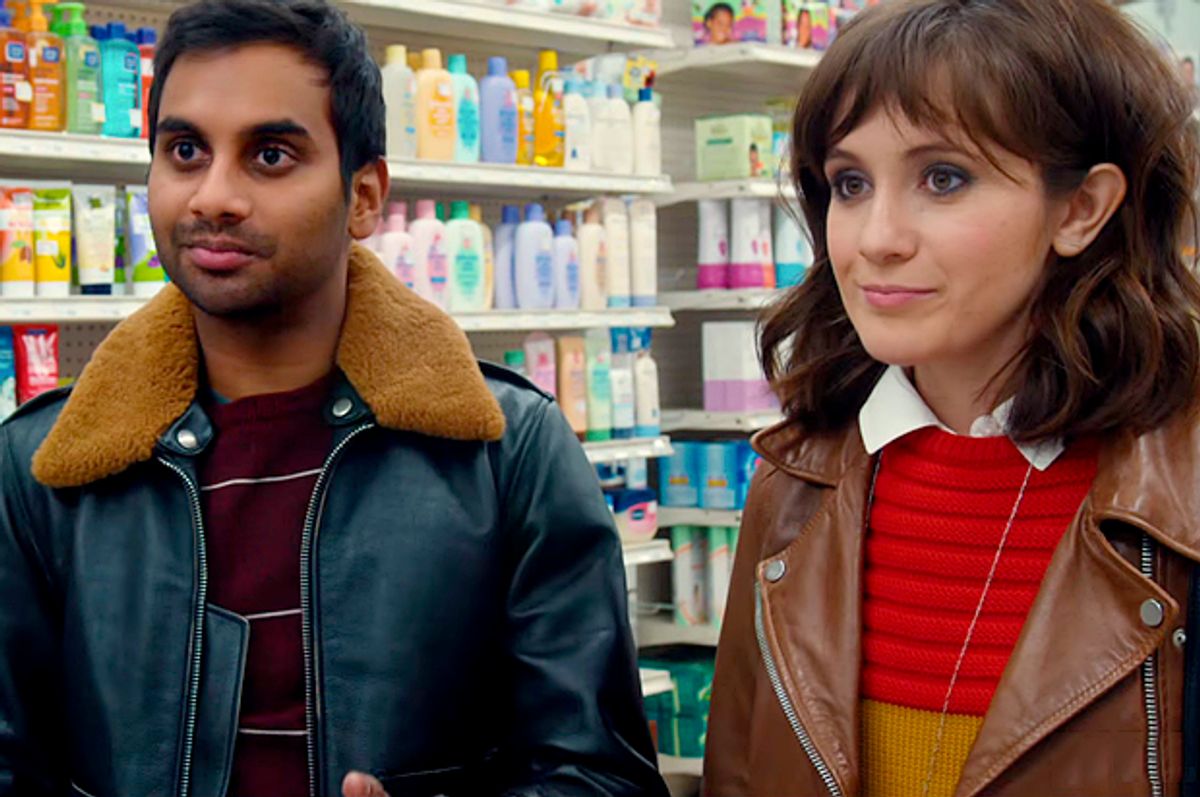 It’s in the second episode that Netflix’s new original series “Master of None” shows its hand. The comedy—a small-scale, stylish sitcom that mixes tones and observes social norms like “Louie,” “Girls” and “Togetherness”—starts out with a broken condom, an awkward Uber ride, and Martinelli’s apple juice; a comedic situation, if there ever was one. But “Master of None,” created and written by Aziz Ansari and Alan Yang—and starring Ansari as the lead—has more on its mind than just the ups and downs of dating in the modern era, a worthy but ubiquitous topic. “Master of None” is about grappling with a specific kind of privilege, and figuring out how to live with it; in that sense, it is the definitive millennial comedy.

In “Parents,” Dev (Ansari) and Brian (Kelvin Yu, though it seems plausible that Brian’s experience is a stand-in for co-creator Yang’s, just as Dev’s is Ansari’s incarnation) both become mildly aggravated with their parents. Dev’s dad is having some trouble with an iPad, and wants Dev to fix it, but naturally, Dev is extremely uninterested in doing so. Meanwhile Brian’s father is after him to read an article in the Economist about how farm subsidies are leading the country to a drought, and then asks him to go out and pick up some rice. Just as naturally, Brian is not that excited about diving into the depressing article, and he can’t pick up the rice, because he and Dev have made plans to watch a movie, and they really don’t want to miss the trailers. The net result is the same: Both sons whine and complain their way out of doing what their fathers have asked. Both fathers examine their sons with the same amount of frustration and disappointment before watching them walk out the door.

As someone who is also too often an ungrateful child, this scene is all too familiar to me — the mingled guilt and frustration and irritation that is part and parcel of the filial bond. “Master of None” identifies that frustration, for both parent and child, and then takes it one further: As each father gazes at his progeny in disappointment, the episode offers up a flashback for each that is a montage of a guilt trip: Brian’s dad, in Hu Wei, Taiwan, forced to kill his pet chicken to feed his family. Dev’s dad, first watching a bully trample his beloved abacus in Thiralnalveli, India, and then putting together enough money to buy a computer for his son. Both flashbacks are thematically appropriate—Dev’s lack of interest in helping his father with the iPad is counterbalanced by his dad buying him a PC in the '90s; Brian’s refusal to get rice is balanced by his father being ordered to kill the chicken. And both are pretty gutting, for the dads; growing up in a third-world country and then immigrating are not easy experiences, but they pale in comparison to getting your kids to respect you. The sons are quickly made fools, when compared to the sacrifices of their fathers. But, of course, because “Master of None” comes from the perspective of these sons, the fools know they are fools. As Brian observes to Dev’s father, when the two meet in “Parents,” Dev’s biggest problem right now is that his Wi-Fi is kind of spotty in his apartment. The question is, now what? When you’ve been delivered, contrary to the whims of fate, from nearly the bottom of the global totem pole to the very top, what are you supposed to make of your life?

That is the driving question of “Master of None,” which follows Ansari’s Dev—a slightly younger and less-successful version of Ansari himself—as he tries to come to terms with his life. Though the show comes from the minds of both Ansari and co-creator Yang, Ansari also plays the lead character, and much of the tone of the show is set by his outsize and enthusiastic comedic tone. Dev is driven by curiosity and self-aware humor—not as depressive as “Louie’s" Louie, or as narcissistic as “Girls’" Hannah Horvath, or as far along in life as “Togetherness’" Brett and Alex. But overriding it all, as is clear from how early in the season “Parents” airs, is this confusion that the life his parents worked to provide him might not be all it’s cracked up to be.

“Parents”—which is directed by Ansari—also stars both of his parents playing Dev’s parents. Shoukath and Fatima Ansari play Ramesh and Nisha, and it’s Dev’s relationship with Ramesh that becomes central to “Parents” and “Master of None.” Ramesh, like his son Dev, loves telling jokes, but unlike his son Dev, they don’t really make anyone laugh. He always wanted to play the guitar, but his father told him it was a waste of time, when he could be earning money for the family. Dev—an aspiring performer—fixates on the guitar while trying to nail down an audition for a role in a hacky movie called “The Sickening.” It’s an unsaid but implied question: Why should he have the opportunity to be an actor, when his father was prevented from even picking up an old guitar? But anyway, part of the audition has to be on Skype, and because Dev’s Wi-Fi sucks, he has to do the rest of the audition in a coffeeshop. It doesn’t go well.

The journey of “Parents”—the struggle for Dev and Brian to understand their parents’ struggle while accepting their own problems as real—is in a microcosm, the journey of all of “Master of None.” “What did you guys do for fun?” Dev asks his parents, at a dinner where he’s trying to get to know them better. His mother laughs at the notion. “You realize fun is a new thing, right?” his father responds. “Fun is a luxury only your generation really has.” But in Dev’s everyday life—which we observe as the season continues—he isn’t having that much fun. He’s stymied by dating; unsure of the prospect of having kids; disillusioned with acting, which he appears to be good at, but so far has just been stuck in commercials. Dev’s story—and Ansari’s, and Yang’s—is the immigrants’ story, of trying to make something of the world when your parents worked really hard to get you there. But the story of trying to make something of your life when we are, technically, at the forefront of the most technologically advanced, most peaceful era in history is a universally confusing one.

“Master of None” is about navigating choice, as both the hard-earned privilege it is and the unexpected burden it becomes. In one scene, Dev is unable to go out for tacos without spending 45 minutes determining which one is the best in New York City. In another, he’s trying to maximize the utility of concert tickets by asking several women out to the concert and agonizing over which to prioritize. (Ansari’s primary romantic interest in the season is played by Noël Wells, and the two are well-matched; opposite many other actors, Ansari would steal the scenery, but Wells finds a way to complement and match his outsize personality.)

With Ansari’s characteristic optimism, “Master of None” reveals the world to be perplexing but ultimately good; the choices are at times paralyzing, but they’re enchanting, too. Without getting either sentimental or tragic, the show plumbs Asian-American identity, filial obligation, the anxiety of settling down, and the looming specter of a dead-end career in a not-too-gritty portrayal of New York City. It speaks to figuring things out as a process worth doing; even for fools such as us, the titular masters of none.