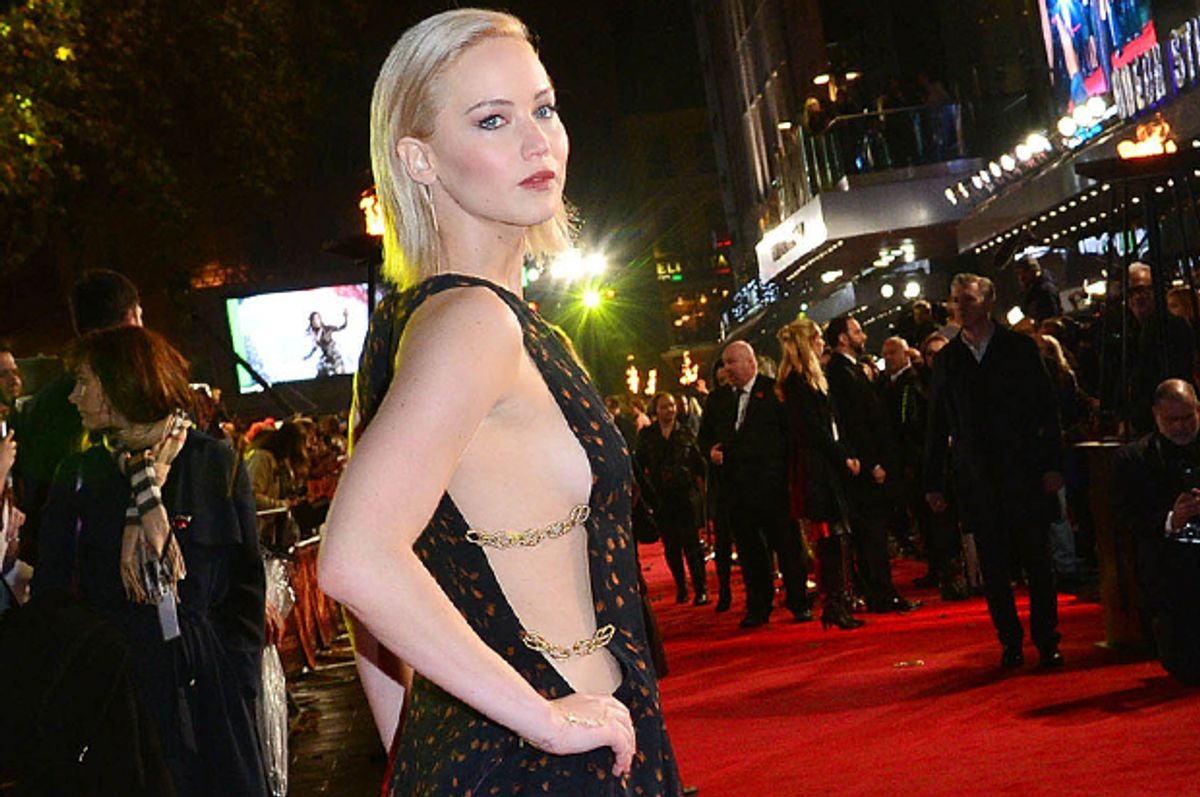 As Jerry Seinfeld might have asked: What’s the deal with side boob? Jennifer Lawrence turned heads at the this week’s UK premiere of "Hunger Games: Mockingjay Part 2" in a Dior dress that teased viewers with a glimpse of the sides of her breasts beneath two fashionable chains. This is certainly not the first time she’s flaunted this body part. Other stars such as Gwyneth Paltrow and Pamela Anderson have also sported side boob in recent weeks. As of 2014, it’s even in the Oxford English Dictionary (“the side part of a woman’s breast, as exposed by a revealing item of clothing”), which noted of the new addition, “side boob is more than 10 times more common in the UK than in the US.”

So why is side boob suddenly so ubiquitous? Part of its appeal is that it hints at revealing something, and offers the tantalizing possibility of a wardrobe malfunction, while also keeping its wearer covered up. It’s provocative without putting it all out there. Elle framed Lawrence’s dress as her flirting with a potential mishap with aplomb, writing “the pretty, printed dress seems precarious, but she shows no sign of hesitation as she walks the carpet.”

Jo Weldon, Headmistress of the New York School of Burlesque and author of "The Burlesque Handbook," said that one reason less is often more when it comes to how much boob to show is that it entices viewers with what might happen. “The side boob is exciting because it hints at this dangerous curve,” Weldon told Salon. “It’s a tantalizing body part because it only shows from this angle, and a side view is always more of a tease than a full frontal reveal. It also proves the absence of a bra.”

Weldon also revealed that in some U.S. counties, the underboob, meaning all the breast below the areola, “is regulated, so burlesque dancers can wear pasties by they have to also decorate below the pasties.”

Fashion blogger Man Repeller has observed that “The side boob reveal is akin to the high-slit trick favored by Angelina Jolie and her evangelists. Many of my bigger breasted friends exalt the look for being cleavage’s more unassuming cousin.”

Side boob isn’t as in your face than the kind of can’t-look-away cleavage Kim Kardashian has become known for. Side boob is more subtle, and if an errant nipple does wind up peeking out for a moment, the wearer can feign surprise more easily than in other instances, such as with a recent plunging neckline worn by Kourtney Kardashian. One fashion site even went so far as to call “frontal cleavage” overrated, urging readers instead to experiment with side boob. Some manufacturers are even using side boob as a selling point when touting their dresses. While Marie Claire declared in August that “side-butt is the new side-boob,” many women, famous and non-famous, beg to differ.

Even though surely plenty of fashion savvy goes into a celeb’s choice to wear designer side boob, there’s still an element of carefreeness to daring to go braless. It can give the impression that the wearer doesn’t really care how artfully placed her breasts are, even though it may in fact be a strategic move to have them noticed for what they don’t quite reveal. After all, Lawrence’s recent dress prompted headlines such as “J-Law’s sideboob steals the show at Hunger Games London premiere.” As Cosmopolitan noted of side boob, it’s “subtle but very, very attention-getting.” It can also be about variety; Lawrence has also sported a very daringly cut dress at the Berlin "Mockingjay Part 2" premiere.

Side boob takes commitment and confidence, and enough daring to make it a choice that we’re likely going to see plenty more of.