The award-winning actor & peace activist criticizes the U.S. political establishment, saying "you have to speak up" 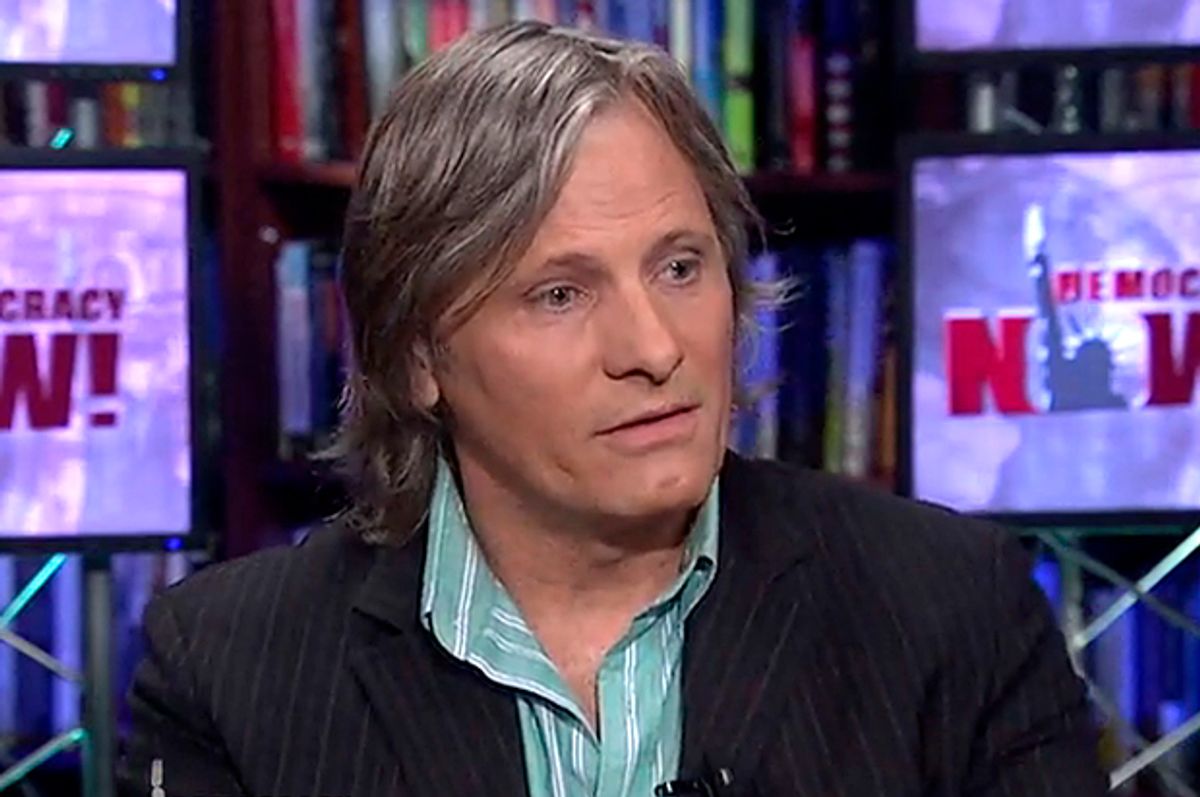 Award-winning actor Viggo Mortensen excoriated U.S. foreign policy and militarism in a recent interview on Democracy Now. Rejecting partisanism, he blasted the Obama, Bush, and Clinton administrations alike for promoting aggressive militarism, which he said is "a long tradition in this country."

The Clinton Doctrine, Mortensen said, "basically says that the United States reserves the right to use unilateral military force anytime, anywhere that it feels that it doesn't have access to foreign markets or resources, anytime it wants to enforce its geopolitical ambitions. I mean, that's crazy. That's tyranny."

"And George W. Bush didn't do anything new," Mortensen added. "He just followed that doctrine. And so has Barack Obama."

When it comes to foreign policy and militarism, Mortensen lamented, Democratic politicians are often barely distinguishable from Republicans. He was particularly critical of the hawkish nature of Democratic presidential candidate Hillary Clinton, who was a steadfast supporter of the U.S. invasion of Iraq. "I don't expect that she or any of the Republican candidates are going to talk in any detail or with any profundity about what happened in 2002, 2003 -- and certainly they're not going to talk about Iraq," he said.

"I wish that Bernie Sanders would be president, for many reasons. I think in many ways he speaks truth to power," Mortensen said. Although he was supportive of the progressive presidential candidate, he was only critically so. "For all the good things [Sanders] does," Mortensen explained, "he's also very hawkish." As a senator, Mortensen noted that Sanders "has voted for every military appropriation, has voted for every pro-Israel government resolution, without question."

On U.S.-Israel policy, Mortensen was very critical. He called Israel "basically an offshore military base for the United States," adding "It's empire, basically."

Mortensen also blasted President Obama for not carrying out "the changes he promised." "It's not enough to say, 'Well, the Republicans stymied me all the way,'" Mortensen explained. "There are choices he made, from the people he appointed -- criminals from Wall Street right to start with after the 2008 collapse of the economy -- and especially foreign policy."

He condemned the Obama administration's drone war, and spoke highly of The Intercept journalist Jeremy Scahill, who recently published The Drone Papers, leaked government documents that expose the large number of civilian casualties of the U.S. drone program, and the ways in which it fuels violent extremism and dehumanizes people living in targeted areas.

This is by no means the first time Mortensen has spoken out about politics. The Academy Award-nominated actor, who has also established himself as a musician, poet, and book publisher, has criticized U.S. militarism for well over a decade.

In 2002, at the height of the popularity of the Lord of the Rings films in which he acted, Mortensen appeared on PBS program Charlie Rose wearing a t-shirt on which he had written "No more blood for oil." At the time, in the lead-up to the illegal U.S. invasion of Iraq, Mortensen faced harsh criticism for his outspoken anti-war activism. He told Charlie Rose "it upsets me even more that questioning what's going on right now, what the United States is doing, is considered treasonous."

For months after appearing on the show, Mortensen recalled getting hundreds of angry emails every day, hate mail calling him a traitor, telling him to leave the country, "and much worse."

In discussing backlash for being politically outspoken, he brought up legendary activist, musician, and actor Paul Robeson. "He was someone who spoke truth to power," Mortensen said. "When he would go overseas and perform, he spoke about U.S. foreign policy and about the tyrannical aspect of U.S. foreign policy, so the next time he came home, they had his passport taken away. He was not allowed to travel."

Today, 12 years after the Bush administration's invasion of Iraq -- with more than one million people dead, the Middle East completely destabilized, and sectarian extremism rampant -- Mortensen continues to stress just how disastrous the Iraq War was. "The consequences of the United States-led unjustified invasion of Iraq are clear for all to see in the region." Yet the presidential candidates from both parties are not giving the issue enough attention, he warned.

In the Democracy Now interview, Mortensen also defended director Quentin Tarantino, who publicly criticized police brutality and is now being boycotted by U.S. police for speaking out. "All over the country, there are some individuals who break the law, who are committing criminal acts as police officers, who are murdering, who are using excessive force," Mortensen said. "But what's more troubling—and that’s part of the reaction, the backlash against Tarantino—is the condoning, the tacit condoning of these abuses of power by certain police officers by their bosses," he added.

When facing injustices like violent militarism or police brutality, Mortensen told the audience "I think there are times where you have to speak up, or you look back and you think, 'You know, I should have said something, because I knew better.'"