The Adele factor: What the phenomenal success of "Hello" could mean for Apple Music, Spotify and good old-fashioned cd sales

When Adele releases her long-awaited "25," it may not stream for free—but it's almost guaranteed to be a hit anyway 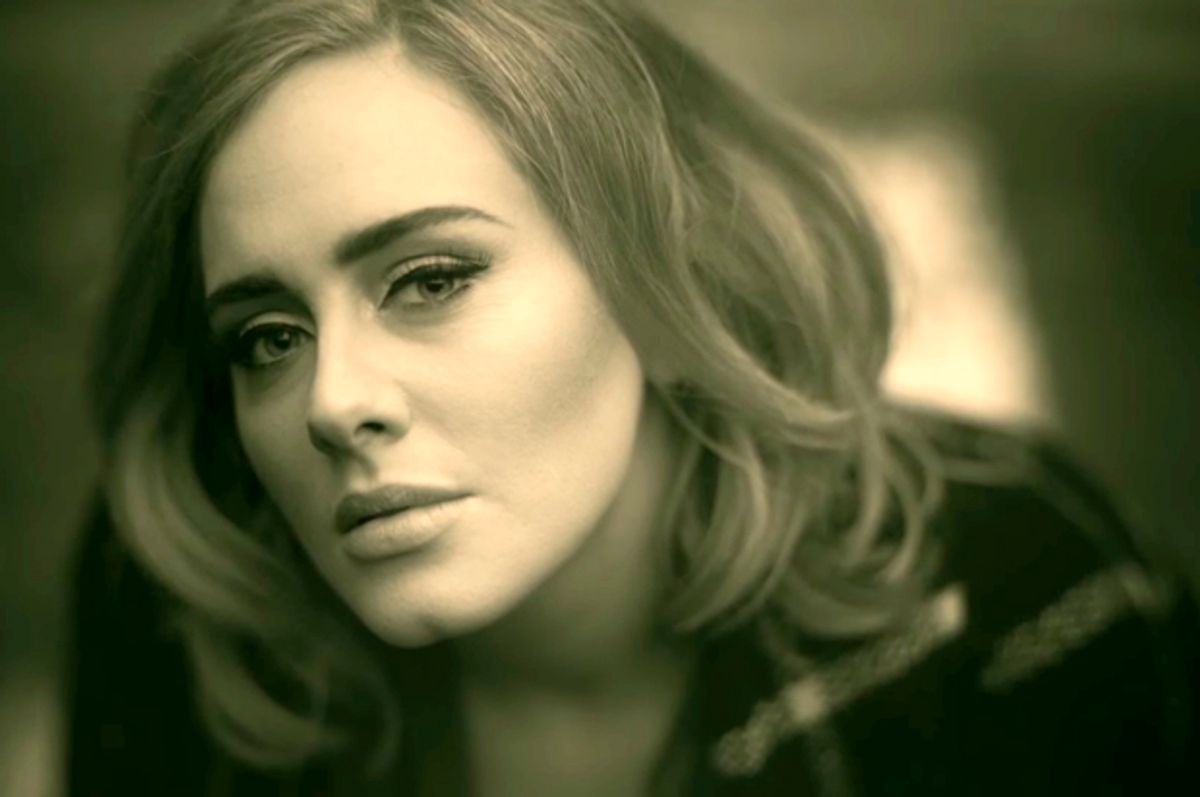 When Adele finally announced details of her long-awaited third album, “25,” in late October, the reaction was, unsurprisingly, rapturous. In an era when cultural saturation is a promotional strategy, Adele has spent the last few years taking the approach of “absence makes the heart grow fonder”: She’s consistently been mum about her album’s progression—save for dropping the occasional Twitter hint and stressing that she’s taking her time with songwriting—and has only released one new song (the James Bond theme “Skyfall”) since 2011’s blockbuster “21.”

Adele’s patience-first strategy paid immediate dividends with the release of “25”’s lead single, “Hello.” Musically, it boasts impeccable dynamics that surge and recede with just the right amount of drama, while its arrangements are predicated on unfussy music: downtrodden piano, subtle digital-heartbeat rhythms, and a slightly imperfect, huskier vocal performance. Even better, “Hello” came paired with a stylized (and stylish) black-and-white video that magnified the song’s theme of missed connections and romantic regrets. It all added up to a subtle refresh of Adele’s previous music and approach, without losing the essence of what makes her so beloved.

Surprising exactly no one, “Hello” immediately went to No. 1 on the Billboard charts. But when the dust settled and the specific first-week sales and streaming numbers for “Hello” rolled in, this feat became even more impressive. The song sold 1,112,000 U.S. digital downloads, handily obliterating the previous high-water mark of 636,000 set by (of all songs) Flo Rida’s Dead Or Alive-sampling 2009 hit “Right Round.” The song also was streamed 61.1 million times in the U.S. alone, with 58 percent of those courtesy of the Vevo on YouTube-hosted video for “Hello” and 30 percent from Spotify. (In fact, worldwide, it was streamed a record-breaking 47.5 million times just on Spotify.) And the On-Demand Songs chart—which tracks “unlimited listener-controlled radio channels on leading music subscription services”–measured 20.4 million streams.

Any way you slice it, everybody was dialing up “Hello” in the week after its release—multiple times, it seems. To get a sense of how dominant Adele’s chart feats are, simply look at the previous chart week’s stats: The top two songs—The Weeknd’s “The Hills” and Drake’s “Hotline Bling”—sold 111,000 and 153,000 digital downloads, respectively. Or compare “Hello” to the first-week stats for “Shake It Off,” the first single from Taylor Swift’s highly anticipated "1989": That track sold 544,000 digital downloads and achieved 18.4 million U.S. streams in its first week.

Of course, it’s worth noting “Shake It Off” represented Swift’s official entry into the pop arena, while Adele has been a critical and commercial force in that realm for a solid half-decade—after all, “21” was the best-selling album worldwide in 2011 and 2012. However, the sheer dominance of “Hello” speaks to how diverse and multi-generational Adele’s fanbase apparently is: There’s no way the song would’ve had such a huge imprint without having support from all stripes of music consumers, from casual listeners to her most loyal fans. Swift has her loyalists too, who support her music unconditionally, but Adele’s numbers speak to unprecedented levels of support.

From an industry standpoint, these stats also foreshadow quite a lot of interesting threads—and highlight just how difficult it is to forecast consumer habits or predict support for a specific format. First and foremost, the incredible number of digital single downloads threw a wrench into the gloom-and-doom, declining revenues and volume narrative around permanent digital downloads. There’s no arguing that streaming is becoming a monstrous industry force: In its mid-year report, the RIAA notes that streaming music service revenue catapulted over $1 billion in the first half of 2015; this amount represents 23 percent growth from the same time period last year. At the same time, the RIAA statistics also found “revenues from permanent digital downloads (including albums, single tracks, videos, and kiosk sales) declined 4 percent to $1.3 billion for the first half of 2015.” The news was even worse for digital singles, as these “declined by value 9 percent to $688 million, with sales volume down 12 percent to 570 million units.”

Yet in that same report, the RIAA notes that downloadable digital albums actually had a solid first half of 2015: There were 57.5 million units sold, 5 percent more than were purchased in the first half of 2014. (Perhaps in support of this point, the pre-order of “25” is currently at No. 1 on the overall iTunes album chart.) What does this mean? Well, perhaps nothing more than thanks to “Hello,” the digital single download numbers for the second half of 2015 won’t show such a precipitous drop—after all, it’s a foregone conclusion that the album is poised to have huge first-week sales.

But Adele’s first-week “Hello” numbers undermine the idea that streaming will eventually completely quash downloading; if anything, it illustrates that consumers like being able to choose how and where they listen to a song. (After all, CDs are still alive and kicking, after being left for dead for years now.) In fact, a separate recent Nielsen study, “Music 360,” found similarly intriguing stats: Teens ages 13-17—the group most thought of to eschew paying for music, and the up-and-coming generation of music consumers—spent 25 percent of their music-geared money on digital tracks or albums. This group only spent more money on concert tickets.

Perhaps more interesting, however, is whether “25” will land on any subscription streaming platforms once it’s released. This is a complicated question, especially considering the music industry itself is currently facing down some rather interesting format transitions. YouTube’s long-gestating paid service, YouTube Red, launched in late October; it provides ad-free video watching and a subscription to Google Play, though doesn’t appear to put music videos behind a paywall. Apple Music’s initial 90-day free trial ended about a month ago, and Apple CEO Tim Cook noted the service has 6.5 million paying subscribers—a decent amount, but still reportedly over 13 million fewer paying subscribers than Spotify has. On a related note, changes to the freemium (a.k.a. ad-supported) version of Spotify are also rumored to be forthcoming.

Back in 2012, Adele was one of the earliest artists to have a blockbuster album absent from Spotify (“21”). The problem? She wanted the album to be available only to paid users, and the platform reportedly refused to acquiesce to that request. (The album eventually became available to everybody, but it was well over a year after its release.) The idea that technology dictates if we have access to a certain piece of music isn’t new; after all, plenty of vinyl albums have still never received a CD reissue. The difference with streaming platforms, however, is that in the case of a high-profile artist like Adele, there are often high-stakes negotiations and contractual deals involved, which dictate whether an album appears (or doesn’t appear) on a service. (In fact, as of this writing, it’s still unclear whether “25” will be streaming anywhere when it’s released November 20, or simply only available to buy.)

As the music industry adjusts to the streaming vs. downloading divide, it’s also interesting to examine the subtle differences between how an artist—or a single—is promoted. In Adele’s case, “Hello” is streaming on Apple Music, but users have to search for it: On several recent visits, the song had no presence on the platform’s “new” landing page, and it’s nowhere to be found on the top Songs chart—even though older Adele tunes “Someone Like You” and “Rolling In The Deep” are charting. (For the record, the video is squarely atop the Apple Music Video chart.) On iTunes, however, the single for “Hello” has prominent front-page placement under the “Hot Tracks” category, and the pre-order for “25” is in the platform’s top carousel. On Spotify, “Hello” is also easy to find, mainly because it’s in the first two curated playlists (“Songs To Sing In The Car” and “Today’s Top Hits”) and atop the global and U.S. airplay charts.

People are going to find and stream “Hello” regardless, of course, and they’ll also buy the song if they feel like it. The same goes for “25”: If an Adele fan wants to hear the album, in whatever format they so choose, whether it’s a digital album or Target-exclusive CD. (Whether “25” will become the best-selling album of 2015 is also a burning question: Taylor Swift’s “1989,” the current 2015 sales leader, has sold 1.71 million copies.) That Adele, “Hello” and “25” seem to represent a pivot point in how we approach physical sales, digital downloads and streaming is perhaps the most incredible thing of all. It’s far too easy to be swept up in hand-wringing over the negatives plaguing the music industry. But the narrative surrounding Adele and “25” is driven by nothing but optimism—and the notion that a powerful, kickass musician is dragging the music industry into the modern world, one snap of a flip phone at a time.