The air went out of Houston: What's next for America's most hated and caricatured state?

Houstonians who've raved about city for decades felt knocked back when HERO lost, and out bathrooms became an issue 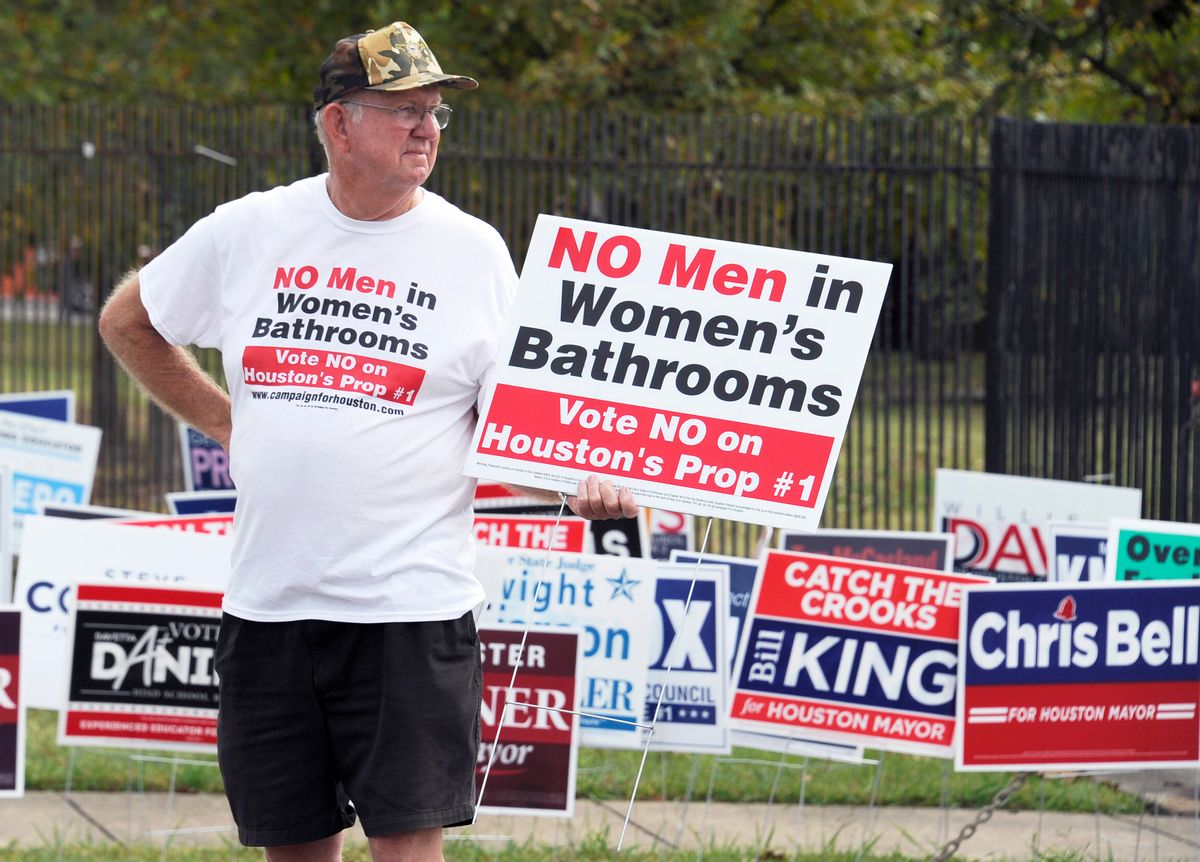 Some of the air went out of Houston Tuesday night. If you listened, you could almost hear it.

That night, voters defeated —  and not by a small margin — the Houston Equal Rights Ordinance, known as HERO.

And by Wednesday, those Houstonians who have spent decades extolling the (real) virtues of the Bayou City (Most diverse city in the U.S.! Great food scene! Crazy-good music and arts! Huge LGBTQ community!) felt knocked back, if not down.

Texas, named the most-hated state in a 2013 Business Insider survey, was a tough sell on Monday. On Wednesday it was that much tougher.

HERO was supposed to prohibit discrimination on the basis of race, age, sexual orientation, gender identity — the entire laundry list. But what it became, in the minds of voters, was “the bathroom ordinance,” and that was its undoing.

Opponents of the measure bombarded local TV with ads warning direly of male predators invading women’s bathrooms to prey on girls and women. Beloved former Astros star Lance Berkman recorded an ad saying he feared for the safety of his four daughters in public restrooms.

It was a clear message. Blunt instruments kill decisively. Up against that, kumbaya is a flyswatter.

Many Houstonians, of course, were happy or relieved by the election outcome, most notably the Rev. Ed Young, head of the multi-campus megachurch Second Baptist, membership more than 60,000, who had said HERO would turn the city “secular and godless.”

One Houstonian who was anything but happy was Mayor Annise Parker, a longtime activist and six-year mayor whose term limit is up. For the record, she’s the only out lesbian mayor of a major U.S. city. (Our mayor is gay!) “No one’s rights should be subject to a popular vote,” she said Tuesday. “It’s just wrong.”

Is Houston intolerant or just lazy? Wayne Ashley, who blogs as the Texas Leftist, points out that half the actual voters were over 65, and only 10 percent were young people. Katherine Driessen at the Houston Chronicle gives evidence that both turnout and messaging were way off.

Driessen also mentions the unmentionable: the economic impact of being seen as intolerant in attracting talent and dollars. (We’ve got the Super Bowl and the Final Four! Or we hope we still do.)

As both point out, backers of HERO failed to enlist the support of the black churches, which were mobilizing to vote for Sylvester Turner in a crowded mayoral field. In fact, Turner, a HERO supporter, did well, and he’ll face Bill King, who said he didn’t like HERO’s wording, in a December runoff.

Shannon Buggs, who works at the University of Houston and is herself African-American, says she is profoundly disappointed in the role of the black churches in defeating HERO.

“But what gives me hope is that the defeat of Houston's equal rights ordinance makes clear that Houston has much more work to do for it to actually become the city it claims to be — global, diverse and welcoming,” she wrote. “It's time for Houston's tolerance of others to evolve into true acceptance of others.”

Work to do. For Houstonians, improving — and selling — their city means there’s always work to do.

Kyrie O'Connor is an editor and columnist at the Houston Chronicle