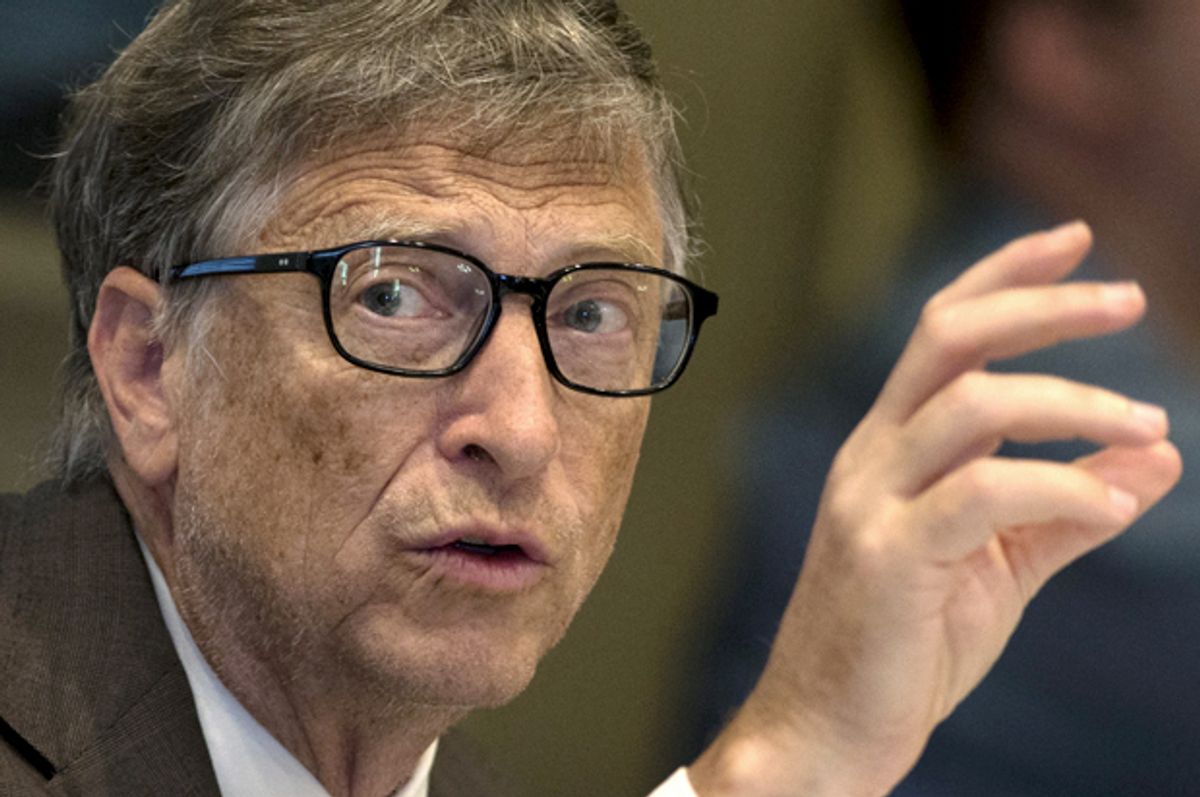 The Bill and Melinda Gates Foundation, the world’s wealthiest charitable foundation, has been under an unprecedented amount of scrutiny regarding their investments in the fossil fuel industry lately.

Alongside a persistent and growing local Seattle-based campaign, about a quarter of a million people joined the Guardian in calling on the Foundation to join the $2.6 trillion worth of investors who have committed to divest from fossil fuels.

In response, Bill Gates has proffered two public rejections of fossil fuel divestment, the most recent in a lengthy interview on climate change in this month’s edition of the Atlantic. Both rejections were based on misleading accounts of divestment which created straw men of the divestment movement, and downplayed the remarkable prospects for a clean energy revolution.

Activists (and kayaktivists alike) were quick to point out the flaws in Gates’ argument and to highlight that by not divesting Gates is supporting the very industries that are lobbying against climate progress and whose business models are deeply out of line with averting the climate crisis. A disconcerting example of this came when Exxon Mobil endorsed Bill Gates’ view. They did so, furthermore, as part of an article attempting to deny their culpability for intentionally misleading the public about the reality of human-caused climate change, and by extension the risks of its product. Like Big Tobacco before them, Exxon are facing calls for federal investigation under the Racketeer Influenced and Corrupt Organizations Act by no less than Bernie Sanders, Hillary Clinton and more. In order to try and vindicate themselves and justify their deeply problematic position on climate change, Exxon turned to Gates’ views as support.

Gates’ problematic statements remain the only response a representative of the foundation has given, and for a foundation dedicated to a better world, sharing worldviews on climate change with a corporation implicated in one of the more egregious corporate scandals arguably in human history seems like a poor position to be in.

Thus, while the Gates Foundation has, of course, done much good work, such a response to divestment and framing of the climate change issue should lead us to question the intentions and motivations behind Bill Gates, the Foundation and its leaders.

For instance, Warren Buffett, who owns much fossil fuel infrastructure, is the largest donor to the Gates Foundation, with donations of over $31 billion. What role does this play in the Foundation’s unwillingness to divest? Also, does Bill Gates’ chairman role on TerraPower, a nuclear power company, make him more willing to knock down clean energy in order to position TerraPower and their nuclear reactors favorably in the market? After all, the Atlantic interview in which Gates rejected divestment read almost like an advert for TerraPower.

To Bill Gates’ credit he got the equation partly right, when he said that “the solution is investment” in clean energy – a statement he backed up by committing to invest $2 billion in clean energy. However, clean energy investments are only part of the equation; if we are to solve climate change, we also need to wind down investments in the fossil fuel industry and related infrastructure, while breaking the fossil fuel industry’s corrupting stranglehold on politics so that we can unlock the sorts of policies, societal changes and investments needed to tackle the climate crisis.

While Gates claims that divestment is a “false solution” that “won’t emit less carbon” and that there is no “direct path between divesting and solving climate change,” the 2° Investing Initiative (and the International Energy Agency) point out that “divesting from fossil fuels is an integral piece to aligning the financial sector with a 2°C climate scenario,” with reductions in fossil fuel investments of $4.9 trillion and additional divestment away from fossil-fueled power transmission and distribution of $1.2 trillion needed by 2035 if we are to achieve the internationally agreed upon 2°C target.

It seems that even Peabody, the largest private-sector coal company in the world, has a more enlightened view on divestment than Bill Gates. Peabody have recognized that by shifting perceptions around fossil fuels and spurring on legislation, divestment efforts “could significantly affect demand for [their] products and securities.” Peabody’s conclusion aligns closely with that of the researchers at Oxford University’s Stranded Assets Program, whose influential report on divestment illustrates that the political and social power that divestment builds through stigmatizing the fossil fuel industry could also “indirectly influence all investors… to go underweight on fossil fuel stocks and debt in their portfolios."

Contradicting Bill Gates’ claim that divestment “won’t emit less carbon,” the "radical" environmentalists over at HSBC bank recently issued a research report showing that divestment could lead to less fossil fuel production and less carbon emissions. According to HSBC, divestment could help “extend the carbon budget” by creating “less demand for shares and bonds, [which] ultimately increases the cost of capital to companies and limits the ability to finance expensive projects, which is particularly damaging in a sector where projects are inherently long term.”

The "Miracle" of Clean Energy

Gates also provided a misleading assessment of the economics of the clean energy transition (seemingly out of the pages of a fossil fuel industry misinformation handbook or his favored climate contrarian adviser Bjorn Lomborg). Gates claimed that the only way current technology could reduce global emissions is at “beyond astronomical cost,” such that a “miracle” on the level of the invention of the automobile was necessary to avoid a climate catastrophe.

While innovation and invention is certainly part of the future ahead, numerous studies from the likes of Stanford University, the Chinese National Energy Research Institute, the IPCC and many others, show that we have many of the technologies needed to transition to a clean-energy future. Indeed, as the IEA points out, what we need is not a miracle, but to speed up the energy revolution that is already underway. Wind power is already one of our cheapest forms of energy, and solar is set to be one of the cheapest energy sources across 80 percent of the world by 2017 according to Deutsche Bank. With clean energy making such great headway, the IEA has estimated that transitioning to clean energy in line with the 2-degree target is not only possible, but that it would result in net savings on fuel and energy costs of $71 trillion by 2050 – no miracle needed or astronomical costs incurred.

Not only would transitioning in line with the 2-degree target save us from high fuel costs, but it would also create millions of jobs, grow the economy, prevent major negative impacts on global health and development, and avert the truly astronomical costs of climate change – estimated to be as high as $3,290 trillion by 2200. While those numbers point overwhelmingly in favor of climate action, they still cannot do real justice to the devastating nature of climate change. As the UN Human Development Report estimates, climate change and other environmental disasters could push more than 3 billion people into extreme poverty by 2050 if we do not act to stem the climate crisis.

That’s really the point. Gates’ rejection of divestment continues to ignore the argument at the heart of the divestment movement, that 60 to 80 percent of coal, oil and gas reserves of listed fossil fuel firms are unburnable if we are to stand a reasonable chance of staying below the 2°C target. Despite that fossil fuel companies are spending approximately 1 percent of global GDP on developing even more new potentially unburnable reserves – ironically about the same amount that the IEA concluded is required to invest in the clean economy in order to stay below the 2°C target. Why, if Gates is committed to the 2°C target and a safe and livable climate, would he want to invest in companies whose business models are out of line with it and who are using the tools of misinformation, corruption and lobbying to ensure that their profits are protected rather than the climate?

The Problematic Narrative of Elites

It is important that we consider the role that Gates’ rhetoric on clean energy plays and how it affects progress on climate change, especially when it is echoed by companies like Exxon. By problematizing the transition to clean energy, Gates and Exxon are helping keep us stuck in a fossil-fueled past which locks us on a path to climate chaos. To see this more clearly, consider this quote from a recent report from the Wuppertal Institute for Climate, Environment & Energy:

“Only rarely are there immutable facts or technical conflicts that impede or even prevent the expansion of renewable energy. Instead, long-established structures and elites problematize the challenges of an energy transformation and sustain the existing system and their own (market) power with corresponding narratives. The success of an energy transformation will depend on whether a broad alliance of civil society, politics, science, and industry develops a convincing alternative and positive narratives – and implements them against resistances”

Recognizing this, the question we need to ask is whether Gates and the Gates Foundation are part of the “long-established structures and elites” holding us back from a successful energy transformation. After all, in problematizing the transition to clean energy, Bill Gates is spinning a narrative favored by the fossil fuel industry, one which protects their corrupted stranglehold on energy and the climate, and which undermines the prospects of undergoing the needed energy transformation which can truly help to create a better world for all.

The Gates Foundation still has the opportunity to align their investments with the noble goals that they were founded upon: “to help every person get the chance to live a healthy, productive life." However, as things stand they are currently investing in companies that are actively and often corruptly pursuing business models that could erase the prospects of a healthy, productive life for billions of people across the globe, especially for future generations and the poor and vulnerable the world over.