Ads for erectile dysfunction, breast augmentation, no problem. Where are the ads for an essential women's service?

We use women's bodies in ads, but somehow advertising abortion services is taboo. What's the deal? 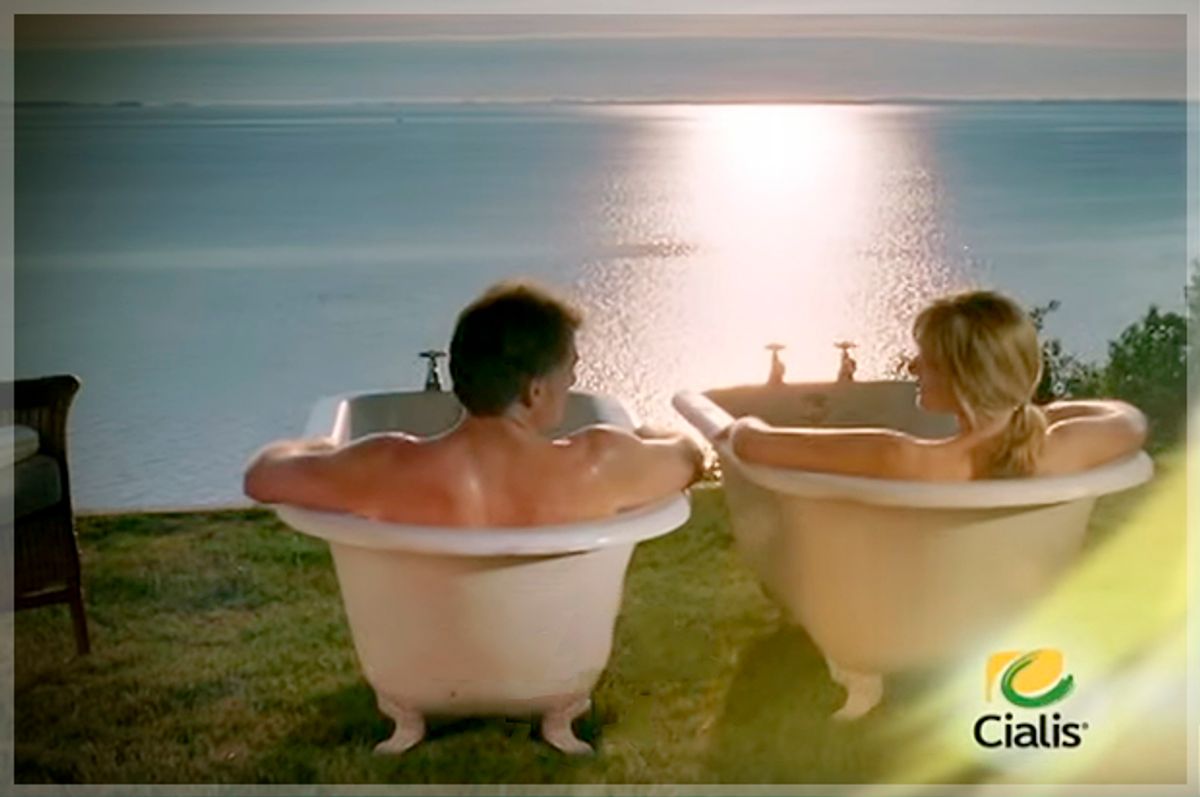 I’m flipping through channels on a quiet Wednesday evening. My child is sleeping and my partner is reading and I am searching for a way to shut off my brain and turn on my lazy. Of course, in my search for good old-fashioned trash television, I’m viewing a series of seemingly unending ads.

I see an ad for cheeseburgers. A woman’s breasts are being used to sell a double-stacked mound of beef, dripping with condiments and garnished with over-fried sides.

I see three separate ads on three separate channels for products used to treat erectile dysfunction. A couple sitting in bathtubs, holding hands. A man and a woman smile at one another, not-so-subtle implications flying all over the place.

I see an ad for breast augmentation at a local surgical clinic. I can make my body that much more desirable if I only give them a call and shell out a few thousand dollars.

There’s an ad for depression medication and an ad for the newest line of mascara and another two ads for hair dye.

And while I am attempting to relax and turn my brain off, instead it shifts into overdrive. Why is it that I never see an ad for abortion services? It’s a useful and even lifesaving medical procedure. One in three women will seek out abortion services in their lifetime and it is, after all, completely legal. Women’s bodies are constantly being used to advertise a wide variety of products, and medical procedures -- both necessary and elective -- are consistently being highlighted in 30-second spots in between my favorite shows.

So why is it that a medical procedure that so many women will undergo and that we all have the right to know about is one we whisper about among friends or to a stranger on the other end of a telephone? Why are we willing to use women's bodies in ads, but rarely see ads that would benefit women's bodies?

A week later, I had my answer.

Carafem, a health clinic specializing in abortion by providing women with a safe, comfortable and supportive environment, recently tried to advertise its health services and unique approach to abortion on the Metro Transit Authority (MTA) buses and trains.

The organization’s ads, according to Outfront Media (which handles advertising for MTA), were deemed inappropriate because they mentioned the word “abortion,” therefore violating MTA’s policy of not letting issue-based advertising on its system. In an email to Carafem -- shared with me by the organization -- Outfront Media’s rep states, “Unfortunately, it looks like any copy submitted by Carafem will not be approved by Metro.”

Since when is a medical procedure a social issue?

Does that mean the MTA would refuse an ad from, say, the Cancer Society? What about Viagra, used to treat a medical condition that plagues a large number of men? What about OB-GYN services and birthing centers? Are those considered issue-based practices?

Likewise, a company called Thinx, which sells period-proof underwear, was met with a similar treatment.

Predictably, the MTA changed its stance and agreed to work with both parties once the New York Times featured a story about Thinx, and the Washington Post wrote a similar story about Carafem.

But a larger -- and dangerous -- problem remains. Society has manipulated abortion and the way in which it is viewed, changing it from a medical procedure to an exhausted topic of debate. Women’s bodies -- in need of medical attention, just like any other body -- are used as statistics and fodder for political points, keeping from women the information they need to make informed and safe choices about their health and their healthcare.

If a woman decides she wants to enhance her breasts, she has thousands of options to choose from and information to sort through. In fact, that information is often advertised to her. But she must research and dig and laboriously search for information about her reproductive health and abortion options.

We’ve turned women’s reproductive health into a diplomatic discussion. We’ve actively kept women from the services, information and support they need, because we find a procedure to be “controversial.” We’re inhibiting the health and well-being of an untold number of women, because we see women’s bodies as topics of discussion during the latest political debate, instead of human bodies in need of affordable healthcare and legalized procedures. We’d rather stay an arm’s length away from a legal and normal medical practice -- to avoid upsetting a particular group of people -- instead of standing up for women and their right to make informed medical decisions by receiving unbiased information.

When are we going to start trusting women? Are we still stuck in an ignorant time, in which society as a whole truly believes that ads for abortions will somehow convince a woman who doesn’t want an abortion to have one? Do we really find women to be that malleable, or are we finally willing to admit that women -- like their male counterparts -- are intelligent and completely capable of making their own decisions, especially when they are presented with factual and accurate information?

I sure hope so.

I turn to my partner as another ad for an erectile dysfunction drug plays on. I ask him if he feels a powerful and uncontrollable need to go buy that product, just because he is viewing an ad for it on his television. He says “no.”

I let out an audible “huh” and go about the task of decompressing. I shake my head, wondering when my intelligence will be considered as valuable as his. I think about some woman, somewhere, who is no doubt desperately searching for accurate information so she can weigh her options and decide how she should treat her unintended pregnancy.

If only she was looking for a boob job or a cheeseburger or Viagra, instead.