“SNL”'s Donald Trump trainwreck: Welcoming a racist megalomaniac under the guise of edgy humor blew up in the show's face 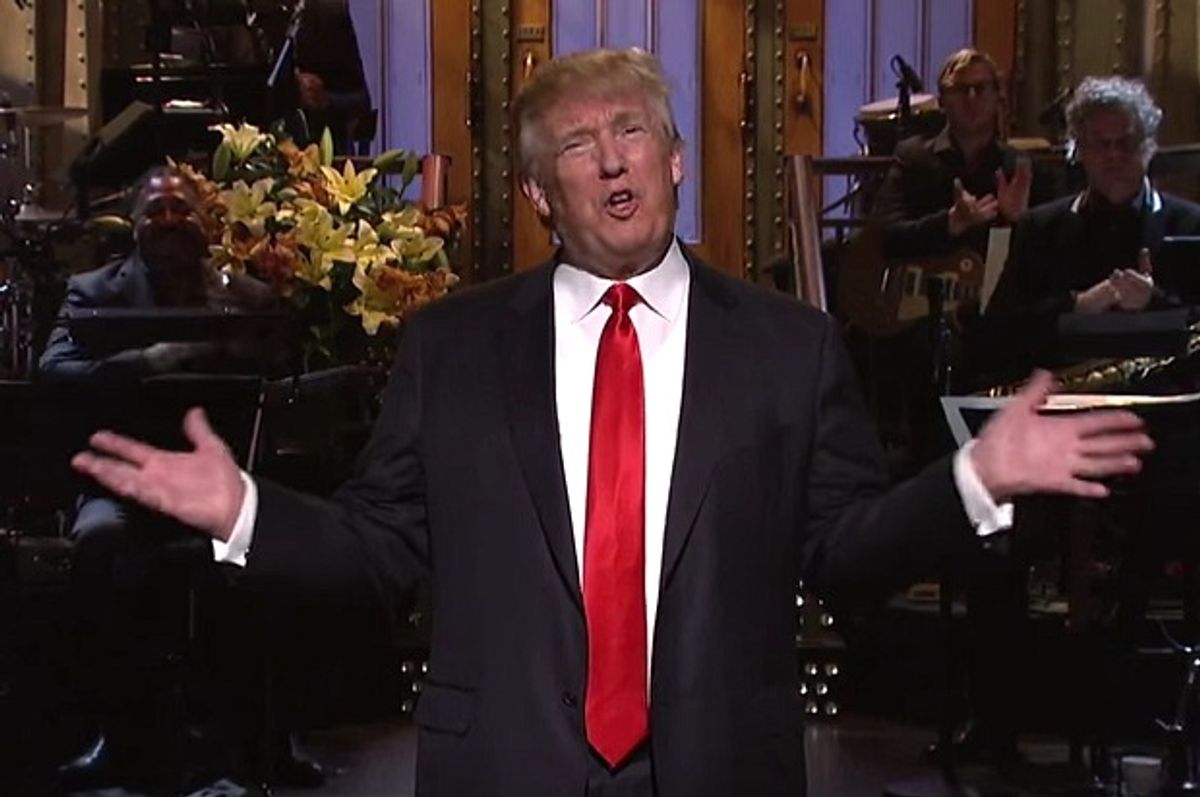 The nadir of last night’s “Saturday Night Live”—if there can be a low point in an episode that itself was a 90-minute low point—was an oddly framed, oddly timed post-commercial interlude from presidential candidate and megalomaniac Donald Trump, the host of the episode, about how he would not be in the following sketch. It was intended to convey a note of sincerity—a nod to the long hours and scheduling, something about how he “tried” but it couldn’t work out. It portrayed Trump sitting in an armchair, speaking—live—directly to the camera. Two tasteful and unobtrusive landscapes of the wetlands hung behind him, on a half-taupe, half-gray backdrop. An art-deco lamp, a bouquet of white flowers, and a metal-rimmed glass endtable accompanied the Donald, to his right. And he sat in a fuzzy silver-gray armchair, too reflective to be truly tasteful, but offering up the comfort and aesthetics of a doctor’s office with delusions of grandeur. In the middle of the scene sat Trump himself, bouffant in place, with a too-long light pink tie. He looked like he was photoshopped into the scene.

Here were his remarks in that scene. As so many impressionists have tried to capture—including Taram Killam and Darrell Hammond, who both did Trump for Trump last night—the final three words were stated with individual and increasing emphasis, suggesting perhaps periods after each, or increasing font size for each successive word. It is a delivery style that so inflates the words that they lose all meaning; what is there to be gained from “tweets” being shout-emphasized?

Hello everyone, I hate to break it to you guys, but I’m not going to be in the next sketch. It was too busy, and I was too busy, and I just didn’t want to rehearse, but you know what, it’s still going to be great. And since I can’t do it and be in it, I’ll do the next best thing—I’ll live-tweet it. Sit back, relax, and enjoy the sketch. And enjoy my tweets.

And there you have it, ladies and gentlemen; a man who would presume to be president. He just didn’t feel like rehearsing the scene, but don’t worry, “it’s still going to be great.”

In a reveal that bodes well for Trump’s numerous campaign promises, the sketch was not even close to approaching great. The setup was deliberately hackneyed—a couple on their honeymoon in Italy who encounter a restaurant’s eccentric proprietress—but the “humor” was almost worse; the “Saturday Night Live” writing staff could not find a way to actually mock Donald Trump in the tweets, and so resorted to making light of the emotional devastation he wreaks with a huge (HUUUGE) platform and a rabid following. The comedians weren’t into it. They had nothing to play off of, except for a dinging sound effect that signified another tweet popping up on the screen. But there was no comedy in the room, just mounting anxiety and a very bad script. When black performer Kenan Thompson stepped out, Trump’s “tweet” read: “An extremely credible source just told me that Kenan Thompson’s birth certificate is a fraud.” Vanessa Bayer, playing visibly rattled at performing under Trump’s scrutiny, winced when the tweets demanded she be deported. And Leslie Jones’ flattery of Trump led to him tweeting, “I love the blacks.” Jones—a black comedian who plays an outsize version of herself for Weekend Update—ended the sketch by throwing down her phone and going for the camera. Meaning that the defining sketch of the night was a room full of people driven to either violence or performance-stopping freezing-up by Trump’s mere digital presence. A moment that is perhaps too real about what living in America feels like today.

The audience, to its credit, could barely laugh along. (And Ivanka Trump, who cameoed early in the episode, got a deafening lack of applause.) The show moved like molasses, because neither the audience nor the cast could get comfortable with Trump. He was an awkward white elephant in every sketch, a struggle to either work around or include. It’s “Saturday Night Live”’s job to make the audience laugh, even when the stakes are high. But the cast seemed just as flummoxed by Trump as the rest of us. Michael Che, co-anchor of Weekend Update, looked visibly bothered. In fact, Weekend Update was noticeably better this week, in fact, because Che’s performance anxiety was replaced by the confidence of no longer caring about the quality of the show.

“Saturday Night Live”’s writing team did not know how to skewer Trump, so they settled for the uncomfortable compromise of skewering the controversy around the candidate. But because the controversy around the candidate isn’t overblown—if anything, it’s notably restrained—the comedy had the effect of minimizing very legitimate concerns. This was most on display in the opening monologue, when a man heckled Trump, yelling “You’re a racist!” It was a plant—Larry David, who had been in the cold open, reprising his role as Bernie Sanders—but the punchline, if there was one, went nowhere. Trump was unflappable, because he knew the heckle was coming, and David’s “character” immediately admitted he’d taken cash to yell at Trump. In a few moments of adroit comic shuffling, the show introduced racism, let Trump defuse it, and then revealed it as insincere. That’s a set of actions with profound commentary for what it means to allege racism in this media climate; naturally, then, no performers of color were on stage. To include them would have meant underscoring how messed-up the bit was, and “Saturday Night Live” was not interested in critical thinking last night.

That’s unfortunate, because that’s what satire is good for. At its best, political humor highlights what isn’t said. Kate McKinnon once again brought her Hillary Clinton in the cold open, and her impression of the candidate is constantly finding new angles to needle her with. In an inspired bit of physical comedy, McKinnon “relaxed” in her chair by stretching out both of her heeled, pantsuited legs, straight into the air, and then crossing one over the other and resting an elbow on her knee in a move that would not have been out of place in an acrobatics exhibition. Oscar Wilde, a satirist himself, wrote in “The Importance Of Being Earnest”: “To be natural is such a very difficult pose to keep up.” McKinnon has been taking notes.

And yet with Trump the entire apparatus of “Saturday Night Live” fell apart. I think partly that’s because the threat is too real: Trump is a xenophobic, rabble-rousing racist who panders to an angry conservative base, and he is currently leading the New Hampshire primary polls by 13.7 points. Bobby Moynihan played a rabid Trump supporter—“drunk uncle”—and though it was perhaps the hardest hitting satire of the evening, it was also the most anger-provoking. Moynihan’s character said a lot of really awful things, under the guise of irony and distance, and with Trump as a guest, it didn’t really feel like those sentiments were being mocked. (Among other things, Drunk Uncle weighed in on Caitlyn Jenner with the highly original “Her name is Bruce.”)

To me, what was so off-putting about Trump directly addressing the camera is that it hewed the closest to presidential behavior than anything else in the evening—including the sketch that took place in Trump’s White House, in 2018. Because in that moment, Trump was addressing the audience—“my fellow Americans” could have easily rolled off his tongue—and attempting some level of sincere conversation. This is the man that would speak to the nation during times of tragedy, or in the State of the Union address. And he can’t even do it, sitting in that velveteen studio prop, when talking about the upcoming sketch; he makes excuses, he quibbles, he fumbles through lines. Trump was more convincing as an aviator-wearing skeezy music producer, or the scenery-chewing laser-harp soloist, than he was in the even slightly presidential capacity the show allowed him. If there was a single funny moment in the evening, it was when Trump, pretending to be the president in 2018, accepted a check from “Enrique”—cast member Beck Bennett playing the president of Mexico, Enrique Peña Nieto. Here was an enactment of the scene Trump has promised and campaigned on, dozens if not hundreds of times—that a wall would be built between the U.S. and Mexico, and Mexico would pay for it. It was entirely absurd to see it occur, even if Bennett’s lines were thin and Trump’s performance was maddeningly entitled. The audience was looking for something more to be said on Trump, but “Saturday Night Live” and the candidate were engaged in the business of massaging each others numbers, in advance of both November sweeps and the Iowa caucuses.

Which, at least for “Saturday Night Live,” is unfortunate. Short-term numbers do not always translate to long-term success, and Trump’s stint on "SNL" was not worth the protests, the awkwardness of the cast, or the dead air of an unamused audience. (It also was not worth the legal headache that could be facing local NBC affiliates.) I don’t blame “Saturday Night Live” for not knowing how to effectively lampoon Trump—a lot of comedians have had trouble with it, including Stephen Colbert, because Trump is such a glib, nothing-to-lose performer. Mocking the controversy is minimizing it, or worse, normalizing it—and the young, liberal, and for once, diverse cast of “Saturday Night Live” did not want to play along. It might have been easier—instead of tackling the distasteful task of writing comedy and playing nice with a racist oligarch—to simply not call him on the show at all.