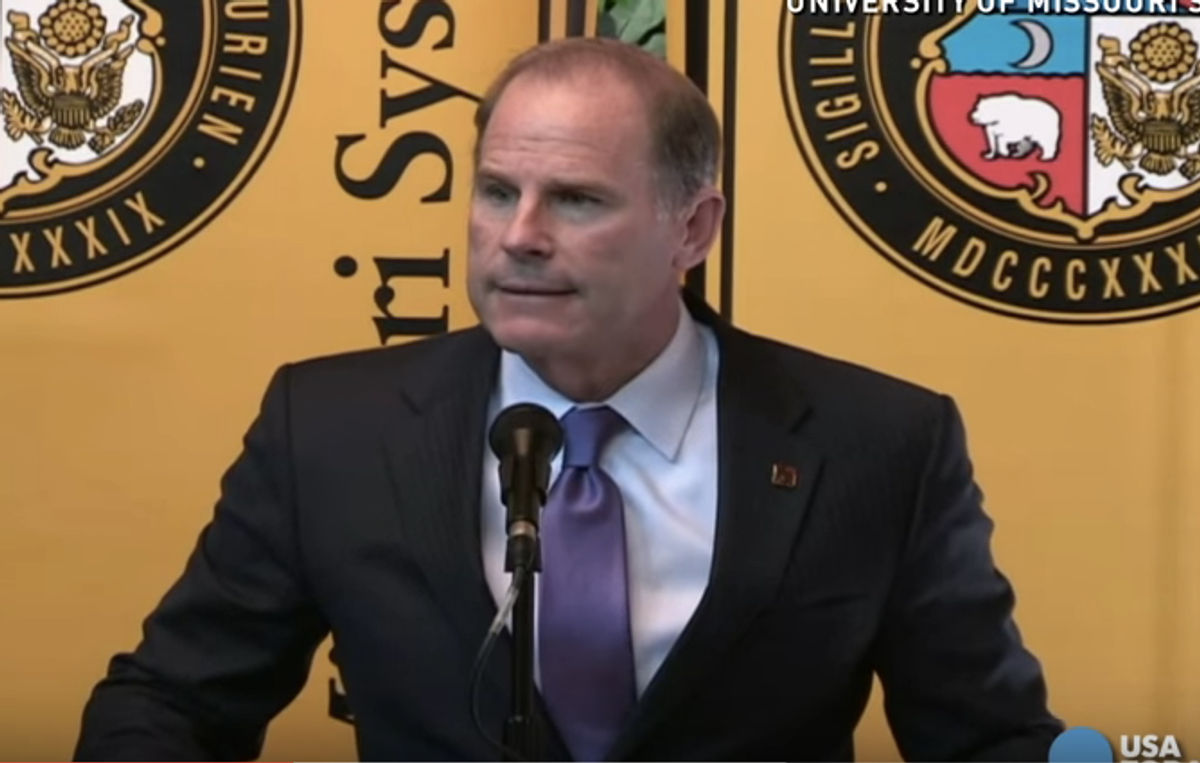 After vowing to not succumb to mounting pressure, University of Missouri System President Tim Wolfe apparently could no longer ignore the national attention brought forth by an announced boycott from the school's football team and resigned during an emergency meeting Monday.

The semester's long simmering tensions boiled over this morning as Wolfe resigned effective immediately amid mounting criticism of his handling of student complaints about racial discrimination and tension on campus.

For months, black students have spoken out against racial taunting on the overwhelmingly white Columbia, Missouri campus (the student body is 7 percent black). Black students have alleged that their fellow white students have called them n**** and used human feces to smear a swastika on a college dorm’s white wall.

"I take full responsibility for the actions that have occurred," Wolfe said this morning. "I have asked everybody to use my resignation to heal. Let's focus in changing what we can change today and in the future, not what we can't change in the past."

Students have longed called for Wolfe's resignation, specifically holding him accountable for not reining in the combative climate on campus and failing to properly address the concerns of black students.

During a homecoming parade on October 10, Wolfe refused to meet with a group of protesting students who had blocked his car.

“I already feel like campus is an unlivable space,” Butler told the Washington Post. “So it’s worth sacrificing something of this grave amount, because I’m already not wanted here. I’m already not treated like I’m a human.”

But it wasn't until black student athletes, specifically football players, spoke out that the attention of the nation was once again drawn to Missouri's racial tensions.

On Saturday, the University's football team vowed to not step on a football field until Wolfe stepped down, canceling practice on Sunday and garnering a ton of sports media attention:

Still, Wolfe held firm, saying in a statement on Sunday that he was wrong to drive through the group of protesting student during homecoming but that he would not step down.

Sunday night, a group calling themselves Concerned Faculty released a statement, saying they "stand in solidarity with the Mizzou student activists who are advocating for racial justice on our campus.”

"We, the concerned faculty of the University of Missouri, stand in solidarity with the Mizzou student activists who are advocating for racial justice on our campus and urge all MU faculty to demonstrate their support by walking out on Monday November 9 and Tuesday November 10, 2015 along with other allies such as the Forum on Graduate Rights," the statement said.

Monday morning, The Missouri Students Association wrote in an open letter that “the academic careers of our students are suffering” and “the mental health of our campus is under constant attack,” before calling on Wolfe to resign.