Donald Trump and Ben Carson are in trouble: Leading right-wing activist group turns against them 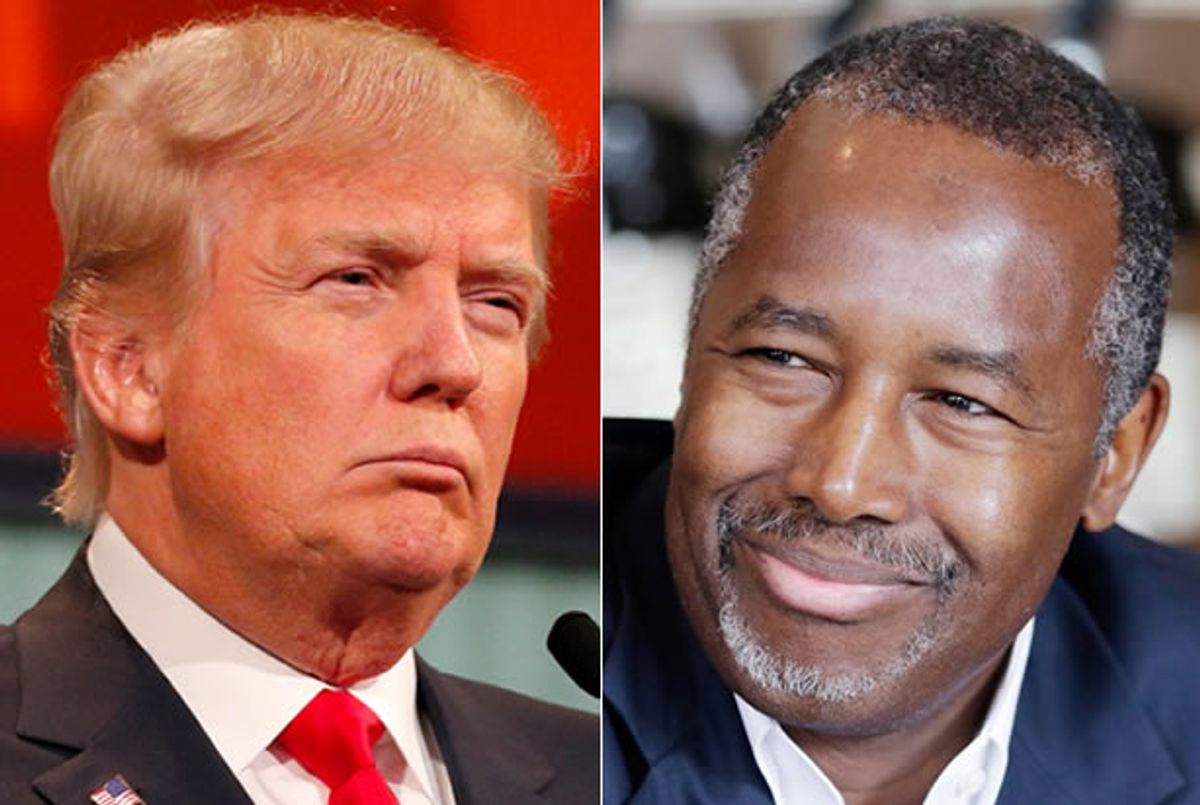 Washington, D.C. outsiders may be all the rage with Republican presidential primary voters but the two leading frontrunners have already lost the support of Heritage Action for America, arguably the most anti-establishment conservative advocacy group in the country.

According to Heritage’s new “presidential platform review” out today, Ben Carson and Donald Trump may be too inexperienced to properly shrink the federal government and fight encroaching Russian dominance.

Unlike the notorious "scorecard" that Heritage grades Republican lawmakers with, the platform review assesses the candidates' public comments and positions in the areas of growth, opportunity, civil society, limited government, favoritism and national security.

Some of its harshest critiques were reserved for retired neurosurgeon and political neophyte Ben Carson.

"On some crucial policy questions, Dr. Carson has articulated positions that are sometimes at odds with key limited government priorities," the review began, noting that in other areas "he has not put forward a detailed policy agenda."

"He has been reluctant to commit to the details of this proposal and has generally tried to avoid arguing that entitlement reform should be priority for the next president. "

Heritage went on to express concern that "Carson might be sympathetic to additional anti-growth regulations of the finance sector," citing his support for increased financial regulations like Glass-Steagall.

"Carson has the advantage of being a Washington outsider but has provided no evidence he will tackle corporate welfare and has expressed openness to amnesty," the conservative group argued.

"As a candidate who has never held public office in the past, the burden of proof is on Dr. Carson to demonstrate his fluency with national security issues," Heritage insisted, moving to its most pointed assessment of the embattled frontrunner.

Noting that "Carson has offered several broad, unconventional critiques of past administrations’ foreign policy," Heritage argued that "for the most part, though, he has done little to demonstrate that he has a coherent foreign policy vision of his own."

Carson "has not articulated a plan to defend America’s national security," the conservative group bluntly assessed:

Dr. Carson is correct that the next president need not be a professor of international relations or a former Secretary of State to serve as an effective executive. Nonetheless, he has not yet shown the very sort of vision that he himself has argued is necessary. His candidacy faces a heavy burden in demonstrating that he is ready to serve on Day One as Commander-in-Chief.

Trump's relationship with the Jim DeMint-run group, on the other hand, is a bit more complicated. Back in September, after relying on Trump's image to heavily promote a Heritage Action presidential candidates forum, the real estate mogul backed out of the event at the last minute, citing a huge business deal he needed to handle.

Nevertheless, Heritage Action ultimately scored Trump's tax plan favorably, conceding that although "the class warfare rhetoric Mr. Trump has used to promote it cedes significant ground to those on the political left who seek massive tax increases. Nonetheless, it is a pro-growth outline."

It's Trump's trade policy that has the conservative group worried that foreign competitors mights raise tariffs on U.S. products and the group reserved this searing perspective on Trump's blustery bravado about how he would handle foreign policy as president:

Mr. Trump has suggested that his approach to diplomacy would generate a new dynamic in adversarial relationships that have vexed past presidents. He has said, for example, “I think I would get along very well with Vladimir Putin.” Mr. Trump’s comments conjure memories of George W. Bush’s now-infamous assertion that he “looked [Putin] in the eye” and “found him to be very straightforward and trustworthy. … I was able to get a sense of his soul.”

Unsurprisingly, Heritage Action was most impressed with Texas Senator Ted Cruz, applauding him for being "willing to pay a political price for taking on government favoritism."