John Oliver's best piece ever: This brilliant expose on our endless prison cycle is an absolute must

In 20 perfect minutes, he explains why our recidivism rate is 50 percent -- and we're spending $80 billion to fail 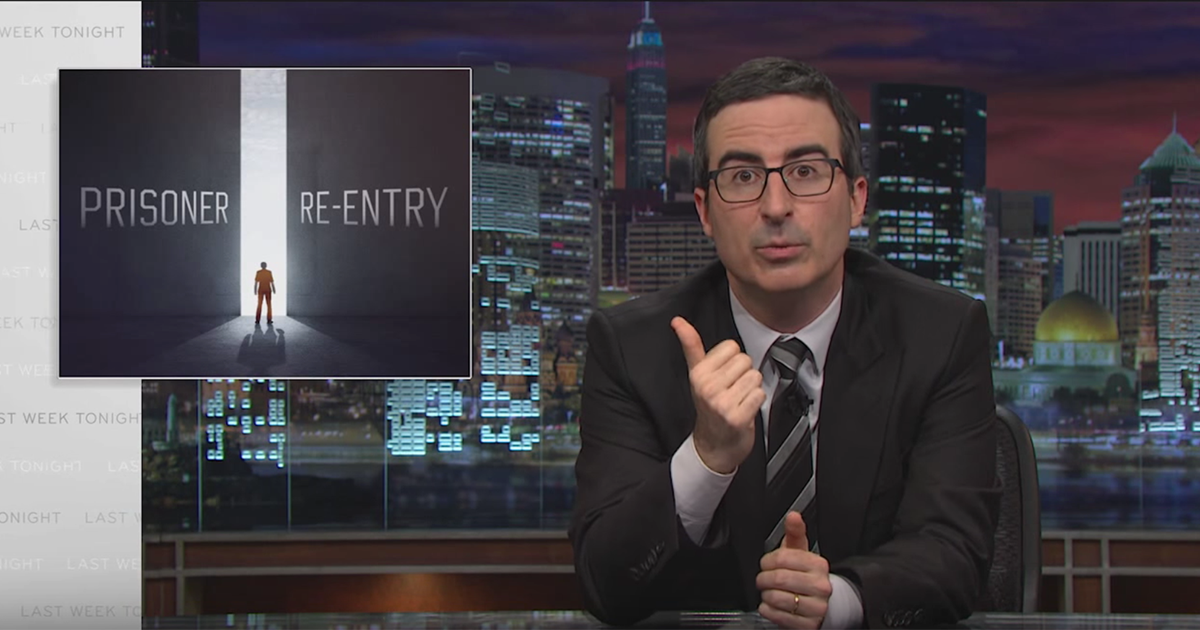 In just one year, John Oliver has covered several facets of the U.S.'s truly jacked-up criminal justice system from mandatory minimums, to how bail punishes the poor, to over-stretched public defenders and small municipal violations putting you in the fuckbarrel. It's so depressing, Oliver encouraged viewers Sunday evening during "Last Week Tonight" to eat their feelings at Dairy Queen.

Instead of discussing the depressing ways in which we lock people away, Oliver addressed what happens when people leave prison. Since President Obama commuted the sentences of the largest number of federal prisoners, this is particularly relevant.

Fox News might be freaking out about the 6,000 people being released, but Oliver says that most of these people were going to be released over the course of the next several years anyway. More than 600,000 people are released from prison each year. However, despite what Hollywood wants you to believe, leaving jail isn't exactly all blue skies, rainbows and sparkly shit falling from the sky.

"For a surprisingly high number of prisoners their time on the outside may be brief," Oliver says because the national average of recidivism is 50 percent. Pennsylvania's Secretary of Corrections John Wetzel says we're spending $80 billion to fail half of the time. But when you look at the challenges that those who served their time face on the outside, it isn't hard to see why they end up back in jail.

First, many former prisoners are denied government services, which makes it difficult to get a job and pay for life on the outside. Ever been applying for a job and see that line that says "have you ever been convicted of a crime?" You have to imagine most of those that check "yes" end up on the bottom of the stack. In fact, in some states it's even illegal to hire ex-prisoners for some jobs such as nurses, teachers and even in Mississippi an alligator rancher. Seriously. Which makes sense, I guess, if you understand how creative people coming out of prisons must get just to find jobs. Finding work is so difficult the Ohio State Rehabilitation and Corrections Reentry Resource Manual gives tips such as refraining from using negative words like "went to jail" on forms that ask why you left job and instead put "relocated" or "contract ended" both of which are totally legitimate.

If an ex-con does manage to find work and "are trying their hardest, satisfying the conditions of parole can be maddeningly difficult," Oliver said because "two-thirds of parolees who go back to prison do so, not due to a new crime, but because of parole violations." Sometimes these can be as simple as "missing appointments or failing a drug test. For some, it may be because they're dealing with untreated substance abuse or mental illness."

Such was the case of one man named Bilal Chatman who worked hard to get his life back on track after spending a decade in prison. He began having problems scheduling meetings with his parole officer while also working his full-time job. Chatman worked a normal 9 to 5 job, but his parole officer left work at 4:30 and wouldn't allow him to come in early. "I felt set up," Chatman said. "I feel like most people in that situation are set up to fail."

Get this, in most states, you have to actually pay for parole services. In Pennsylvania, they charge a $60 fee just to enter the program. "And if you don't have the fees they charge, you can be forced to make a truly ridiculous choice," Oliver said showing a clip of a woman saying the parole officer will hold you in prison until you do have the money. One parolee said that he ended up having to sell drugs just to pay back the state of Pennsylvania.

Many of these policies began in the 1990s when we were all trying to figure out how to be "tough on crime." Most were passed without a second thought or any debate, but the outcomes have been terrible.

"It's not always easy to care about the welfare of ex-prisoners, and some are going to re-offend no matter what you do," Oliver said. "But the fact remains, over 95 percent of all prisoners will eventually be released, so it's in everyone's interest that we try to give them a better chance of success."