Mitt Romney to the rescue: Here's how GOP chaos may bring him out of political retirement

It sounds crazy, and it's certainly improbable, but don't laugh: A chaotic convention could mean Mitt's return 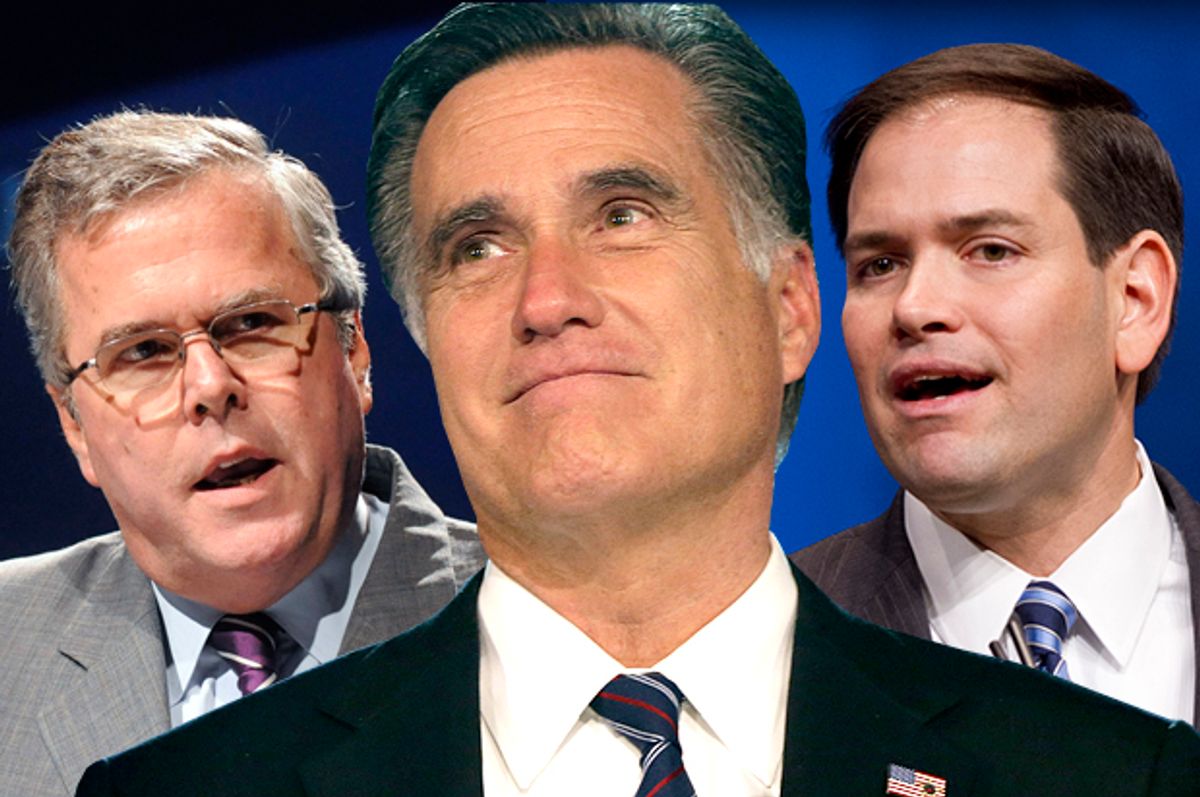 Republican insiders are starting to worry about the prospect of a brokered convention, a potential nightmare for the party next year. Take Karl Rove: Whatever you think of him, the man understands Republican politics as well as anyone. And in a column last week for the Wall Street Journal, Rove explained why the 2016 Republican National Convention might end in a bitter fight over the nominee:

A few factors have increased the chances of a multi-ballot convention. First, Republicans have the largest field of serious contenders in history: 17 candidates entered the race and 15 remain. The bigger the field, the longer it could take to settle the contest…Five candidates are polling at less than 5% on average but have enough money or stage presence to last at least through February’s Iowa caucus and New Hampshire primary…That leaves five candidates who today appear to have the message, money, organization and poll numbers to play the long game: neurosurgeon Ben Carson, real-estate magnate Donald Trump, Sens. Marco Rubio and Ted Cruz, and former Florida Gov. Jeb Bush.

Adding to the confusion is the GOP’s process for awarding delegates. There are enough early primary states that award delegates on proportional basis to create a situation in which “the top three or four candidates may be separated by only a small number of delegates, giving the leader a plurality, not a majority.” It’s conceivable that by the end of March, the field could be reduced to two, but that’s not guaranteed.

Rove’s concerns are more than justified, in other words. The Republican field is fluid, to put it nicely, and it’s entirely possible that we’ll head into the convention without any of the GOP candidates having locked up the nomination. Part of the problem is that there isn’t a consensus establishment candidate, and the obvious choices are flawed in their own ways.

Jeb Bush was supposed to win the nomination. He had the name recognition, the big money donors and the tacit consent of the establishment. But he continues to flounder and has shown himself incapable of securing the nomination. Rubio shows promise, but he’s inexperienced and is just now starting to fend off attacks from opponents. And it remains to be seen how much damage his credit card scandal will do.

Chris Christie was an early darling of the establishment, but he’s plagued by scandals as well, and his sagging poll numbers finally got him demoted to the kids' table at the next Republican debate. John Kasich, the moderate governor of Ohio, has plenty of establishment appeal, but he hasn’t come close to cracking 5 percent in the national polls. Kasich’s contrarian moderation simply isn’t connecting with a conservative base.

It’s equally difficult to predict who, if anyone, the consensus outsider candidate will be. Trump is still the preferred choice of right-wingers, but Carson and Cruz have proven popular in this lane, and both have threatened to top Trump in the polls next year. And in any case it’s almost impossible to predict what the conservative base will do.

To be clear: I don’t expect Romney to run. And there are no indications that he’s even considering it. However, it makes a lot of sense, given the current dynamics of the race. Here’s why: by avoiding the primaries, Romney has remained above the fray and, in the minds of the establishment, at least, he’s still a safe choice. If he entered the contest at the convention, he’d be far less damaged than the other candidates.

Romney also remains relatively popular in several wings of the party. As generally happens, most Republicans have forgotten by now how stale and awkward Romney was as a candidate – and many imagine (falsely, in my view) that the world would be a better place had Romney won in 2012.

Furthermore, Romney would be more competitive in a general election than any of the GOP candidates currently running, and the establishment knows this. Recall that he lost to Obama in 2012 by only 4 percentage points in the popular vote, and considering that he’d be competing against an incumbent party after two terms, it’s not at all unreasonable to assume he’d enter the race in a dead heat with the Democratic nominee. And if the economy starts to slump at all next year, which is not out of the question, the landscape would be even more favorable for Romney.

Again, all of this is extremely unlikely, but it’s not impossible. If the convention is sufficiently chaotic and the party is unable to settle on a single nominee, I wouldn’t be surprised if they turned to someone like Romney.

Desperate times, as they say, call for desperate measures.