Starbucks doesn’t hate Jesus: The malignant narcissism of the new "war on Christmas" crusaders gets the backlash it deserves 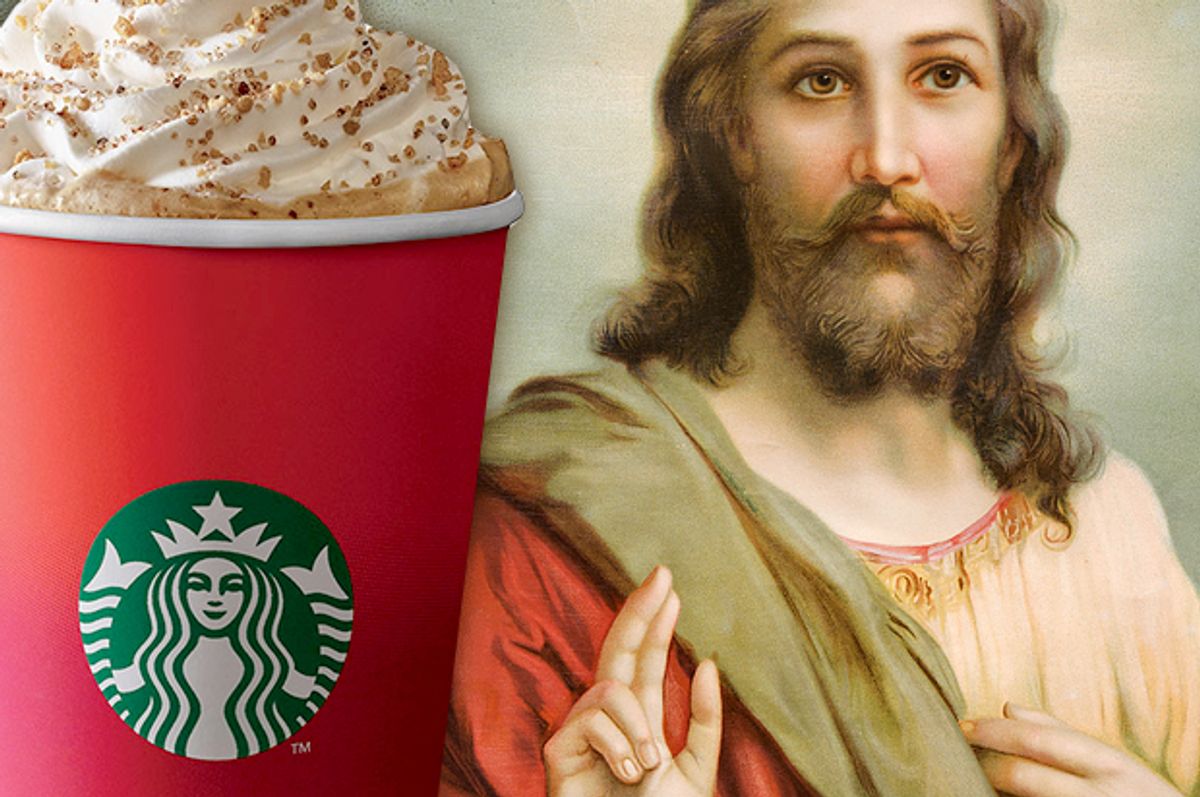 Starbucks hates Jesus, if you believe the latest “War on Christmas” viral video making the rounds in response to Starbucks switching to a plain red cup for their limited time holiday drinking vessel. The Starbucks red cup brouhaha is so ridiculous I was sure its creator was pranking not the coffee company, but all of us, when I first read about it. Evangelist Joshua Feuerstein is crowing that he told a Starbucks barista his name was “Merry Christmas” in order to get them to write it on the cup, as if that is anything more than a symbolic victory whose proceeds are going directly into Starbucks’ coffers. It should also be noted that in April, the Christian Post reported that Feuerstein could face felony charges for asking the owner of a Florida bakery “if she could make him a sheet cake displaying the words ‘We do not support gay marriage.’” Clearly, subtlety is not his strong suit.

Compounding the “is this guy for real?” factor, any comments on the Facebook page Liberal War on Christmas post featuring Feuerstein’s video also seem equally likely to be mocking the pseudo-religious social media campaign and supporting it. Case in point: “It's about time those ruthless atheists were taken to task! Joshua Feuerstein is a great Christian American Republican!!! We should all salute him.” It’s highly unlikely that Starbucks is being run by “ruthless atheists,” especially when you consider they are also selling an Advent calendar and using the word “Christmas” on the front page of their website, with the tagline “Christmas (Blend) Came Early Online.”

A Starbucks spokesperson told Salon via email that rather than getting rid of Christmas, as this ridiculous campaign wants its followers to believe, they were inviting customers to put their own spin on the holiday with the new cup design (although the idea that all customers of Starbucks have “Christmas stories” is, of course, not true, which I, as a Jew and Starbucks gold card member, can attest). “Since 1997, we have served our holiday beverages in a unique red cup, each year and each design telling a different story.  Starbucks is inviting our customers to tell their Christmas stories in their own way, with a red cup that mimics a blank canvas.”

That being said, Starbucks does seem to have distanced itself online from officially using the word “Christmas” in relation to its red cups, in what I think it’s safe to assume is a nod to the diversity of belief systems I mentioned above). On its website’s history of the special cups, they write, “Creating a culture of belonging, inclusion and diversity is one of the core values of Starbucks, and each year during the holidays the company aims to bring customers an experience that inspires the spirit of the season. Starbucks will continue to embrace and welcome customers from all backgrounds and religions in our stores around the world.”

Jeffrey Fields, Starbucks vice president of Design & Content, is quoted saying, “In the past, we have told stories with our holiday cups designs. This year we wanted to usher in the holidays with a purity of design that welcomes all of our stories.” Key words: “all of our stories” (emphasis mine). “All” would by definition include Feuerstein and any other Christians. There’s a myopia to this campaign that, while not surprising, makes it practically a parody of itself. To assume that by including other types of believers, as well as nonbelievers, Starbucks is therefore maligning Christians, is narcissistic at best.

Furthermore, even religious Christians are calling out this campaign as self-serving and nonproductive — the posts using Feuerstein's #MerryChristmasStarbucks hashtag are overwhelmingly dismissive of the campaign, even from a religious perspective. Other commenters on the Liberal War on Christmas Facebook page raised genuine, valid concerns about the uselessness of attacking red cups, given the magnitude of suffering in the world. One wrote, “You did not share all the facts. You have a platform to share God's goodness not to shame a company. Raise up your followers with a movement to open their own homeless shelters. To walk among the broken. To go and get coffee to go give to someone down on their luck this Holiday. Serve the coffee not point out their ‘mistakes’, actually, your lack of education is causing a really sad situation to a company, and possibly creating kahasis. Encourage your followers to buy a bag of coffe, brew, get some cups and write ‘God Loves You’ and pass that out. Just a thought.” As one Twitter user, Brian Green-Young, whose words were highlighted at Delish, wrote, “If you’re Christian & upset over Starbucks cups, your priorities are out of whack and you don’t have enough to do.”

For #MerryChristmasStarbucks to make sense, you genuinely have to believe that Starbucks is not a gigantic retail company, but a radical enterprise trying to bring Christianity to a screeching halt—but only for the next two months, since the cups are available for a limited time. Then again, many Christians seem primed to take offense at anyone who isn’t as ardent a fan of Jesus or Christmas as they are; remember last year’s brouhaha over Neil DeGrasse Tyson’s Christmas Tweets?

My boyfriend’s mom, who decorates every inch of her home for Christmas, including special Christmas-themed glasses, plates, towels and other accessories, in addition to a Christmas tree and lights, is in no way offended by Starbucks’ change. “I love the mocha peppermint frappe drink that is served during the holidays. It's fun that they put the drink in a holiday theme cup but all I really care about is what's inside the cup,” she told me. “I look forward to the drink at this time of year, not the cup. I think the whole cup thing is blown way out of proportion, but that's what people like to do and social media helps them make a huge deal out of nothing.” Indeed.

While common sense seems too blunt of an instrument to use in the face of Feuerstein and his ilk’s way of thinking, I’m going to cite it here, in the form of Clifford Stumme’s excellent post on what Feuerstein’s doing wrong (also, Stumme describes himself as “a Wife-April-loving, stuff-writing, beard-growing, picture-taking, knife-juggling Christ-follower”). Two key points Stumme makes: “He’s confusing a greeting with the holiday. Christmas is larger and bigger and will happen whether a company recognizes it or not.” and “Feuerstein isn’t convincing anyone. By accusing Starbucks of hating Jesus in his video description, he’s vilifying them and using flashy click-bait tactics to spread his video. His tactics encourage disagreement and win-lose situations.” Speaking to his fellow Christ-followeres, Stumme writes, “Starbucks isn’t persecuting us and even if they were, our marching orders from Christ himself are simple: ‘Turn the other cheek.’” That may not be as flashy a message as Feuerstein’s, but hopefully it’s one that will endure longer than the evangelist’s.