Thanks for nothing, "SNL" and Donald Trump: Welcome to the nightmare of "equal time" for these GOP candidates 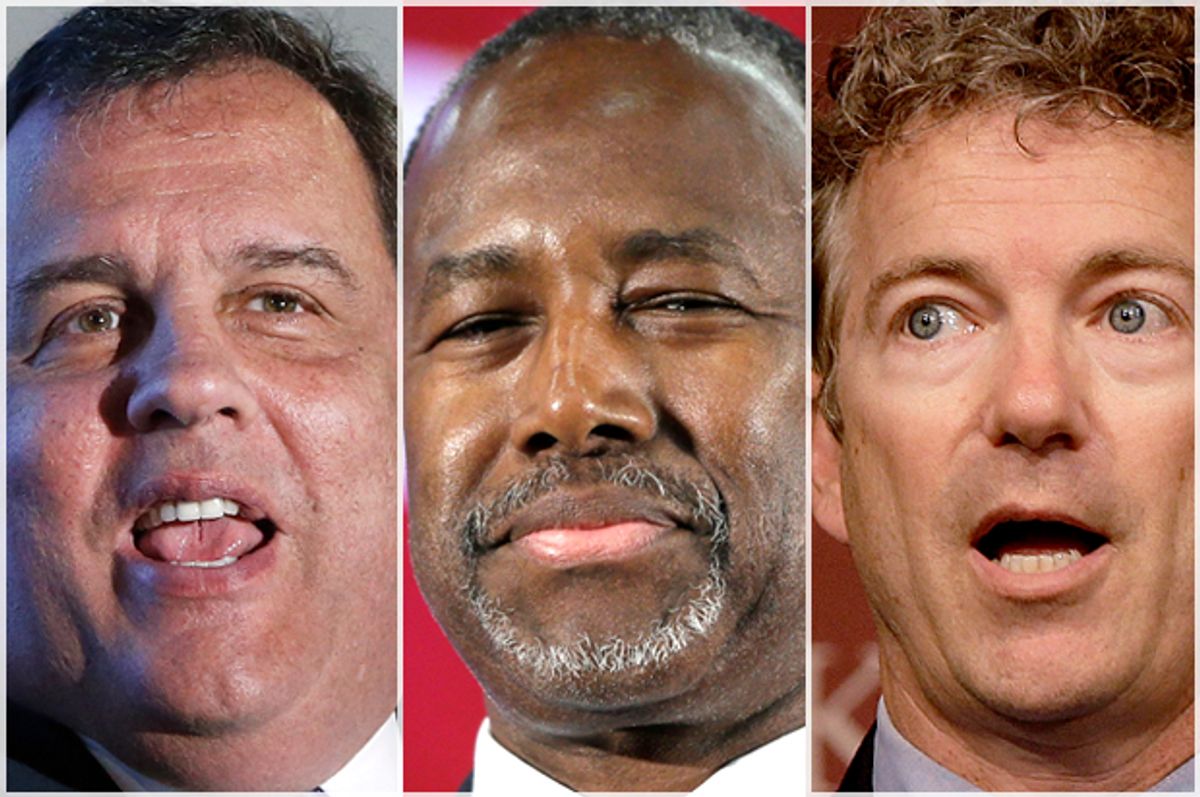 With all the heat around Donald Trump’s “Saturday Night Live” appearance – the protests, for instance, by Latino activists angered by the real-estate mogul’s notorious anti-Mexican comments – one thing that didn’t seem likely was that Trump would simply show up and be dull.

Those who feared Trump’s appearance were bracing for a demagogue, or at least someone funny or charming enough that he would persuade people to take him seriously, maybe even vote for him. The flatness of scripted Trump (and perhaps weak writing by the "SNL" team) makes the anticipation and fear seem a bit strange in retrospect. This man who is often so unintentionally funny in the purportedly serious setting of national politics was, one on of the funniest shows on TV, rarely even amusing.

But a stranger development has now appeared: The other GOP candidates may be able to appeal to a similar length of exposure on NBC – 12 minutes and five seconds, it turns out. The FCC’s “Equal Time” rule means – as the Hollywood Reporter explains:

... if a broadcast station gives one candidate airtime in anything other than a newscast or news interview program, the other candidates shall be afforded equal opportunity. This potentially means that Trump's rivals from Marco Rubio and Ben Carson to Lindsay Graham and George Pataki can request an equal opportunity to appear on-air for free to deliver their own message to voters.

The candidates have seven days from Trump's appearance to file for their equal time. This seems at the very least a bit scary for those of us who watch television. The candidates are not likely to get a stint hosting "SNL" -- they'd probably end up on a news program -- but makes you wonder how a few of the candidates might spend their allotted airtime on Lorne Michaels's show.

The neurosurgeon has arisen from obscurity to become almost overexposed, which puts him in an odd position. As a comedy figure, he’s a wildcard: Low-key to the point of comatose, he also opens up about his outrageous beliefs about slavery, the Holocaust, the pyramids, and who knows what else is coming.

An "SNL" cold open could offer more comedy than anything Trump offered by simply having Carson revisit some of his classic assertions ("You know Obamacare is really, I think, the worst thing that has happened in this nation since slavery,” will be hard to beat as the race’s greatest punchline) with a drowsy delivery that is the opposite of Trump’s pumped-up emptiness. Maybe set him in a New York bar – closing time, just him and an oddball bartender, a la Kate McKinnon and Hillary Clinton -- and watch the sparks fly?

Or how about a skit based on this hilarious post by Damon Young at Very Smart Brothas, in which Ben Carson and the "Black Klingon Jesus" from Carson's own portrait hang out at a YMCA sauna?

In some ways, Bush is the opposite of Trump. He’s a straight-up-the-middle establishment candidate to Trump’s belligerent wildman, but it’s hard to imagine his "SNL" appearance coming off any better. His recent book of collected emails makes clear that whatever his good qualities, he may be the least funny political candidate in decades. Please, keep this man off the air – for everyone’s sake.

Young, genial, handsome, Rubio does not have much to say when he is not attacking the liberal media. Twelve minutes of this guy could very likely be as bad as Bush. What’s the matter with Florida? The only entertaining outcome here is Rubio slipping into a right-of-center 12-minute freestyle rap inspired by his heroes Eminem and Tupac.

The New Jersey governor has been accused of cronyism and corruption, but he’s also reasonably comfortable in front of the camera, is a responsive interview subject, and can be brashly funny in a “you-talkin’-to-me” kinda way. Now that we think about it, despite his wooden appearance on Weekend Update in 2012, Christie hosting "SNL" might actually be pretty good.

Since he’s recently been exiled to the kid’s table debate, 12 minutes and five seconds on NBC may be the best shot the New Jersey governor could get before disappearing into the same hole Scott Walker went into.

These two are supposed to represent the party’s young, quick-drawing, maverick energy, and they’re certainly gifted ranters. They’re in love with certain odd ideas that seem likely to lead to good comedy.

A joint hosting – 24 minutes, 10 seconds? -- could become a great belligerent buddy movie as the two lecture each other on the gold standard and the Civil Rights Act and then close out the episode by challenging each other to a televised duel. May the best man win.