Ben Carson's oddball appeal: "The right has not traditionally wanted black conservatives who are all over the map" 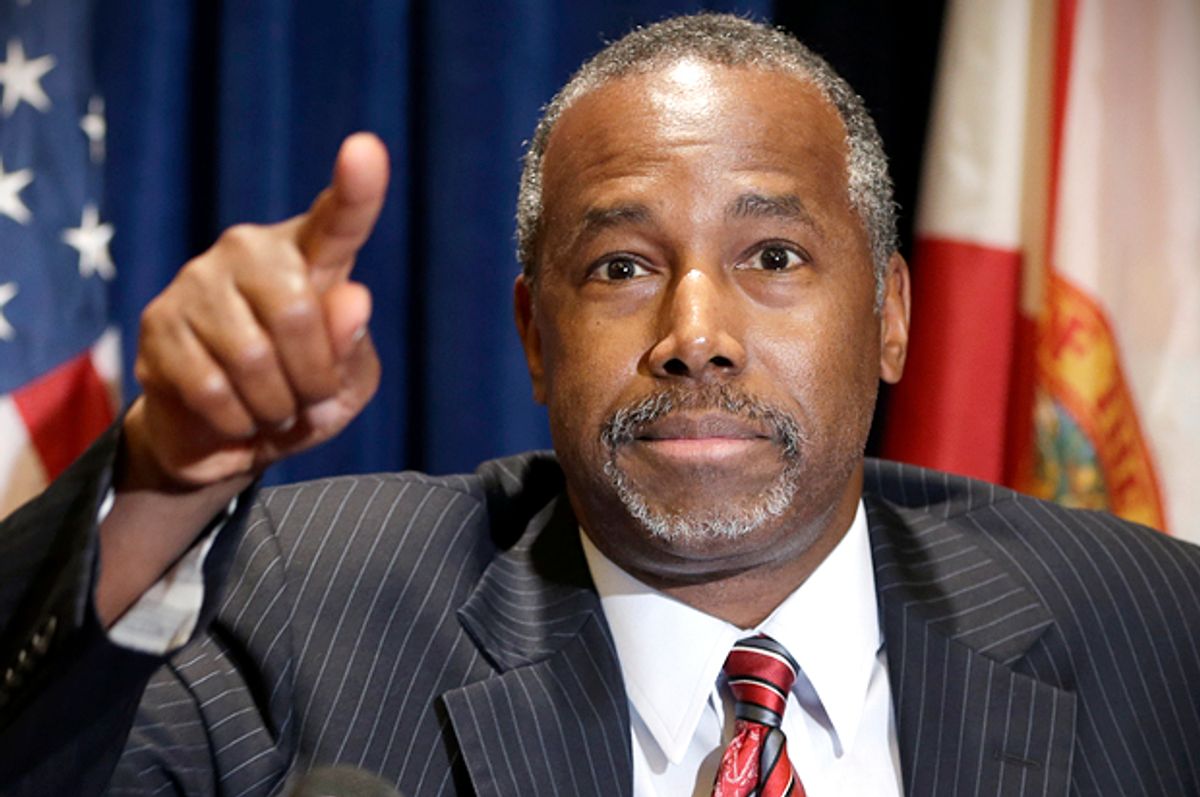 The neurosurgeon turned leading presidential candidate Ben Carson has provoked passionate support and head-scratching in equal measure. In spite of, or perhaps because of, a series of bizarre statements, his polling has remained high, and he goes into the Republican debate tonight the leading candidate.

What explains Carson’s success and staying power? How much is he indebted to the tradition of black conservatism? To what extent does he appeal to black voters?

We spoke to Angela Dillard, a professor of African American Studies at the University of Michigan at Ann Arbor whose specialties include black conservatism. Shed’s also the author of “Guess Who’s Coming to Dinner Now?: Multicultural Conservatism in America.” The interview has been lightly edited for clarity.

Carson is polling higher than a lot of pundits expected – and he’s managed to hold on. Are you are surprised as some others?

I am. I assumed this would be another Herman Cain, or Alan Keyes… There was some early pre-Labor Day, “These are entertaining figures to watch.” It was political entertainment.

So I had assumed this was not going to be a serious candidacy; I was waiting for a [collapse] to happen. I’ve been really stunned that he’s polling really well, consistently, and seems to have real pockets of support.

Do you have a sense of where his support is coming from – evangelicals? People jaded with politics?

He seems to be doing pretty well among the Tea Party constituencies – they’re received him well. And certainly evangelical communities. That’s really an important base for him – my guess is that’s where it’s strongest. Because that’s a community that’s very sensitive to the charge of racism.

To what extent is he typical of black conservatives?

There are some things in his profile that are right in line – especially his view of abortion. It’s deeply religiously informed, and even the analogy between abortion and slavery – I know he’s taken a lot of flak for it, which I think is a little unfair. Especially in African-American religious communities, that is not an unusual view at all. It’s interesting to see white evangelicals grasp onto that. If you look back – before Jesse Jackson ran for president, he made that exact same analogy, that in African-American communities you don’t fool around with questions of personhood… You don’t make those kinds of judgments about whose life is valuable and whose isn’t. So yeah – that has been a strong narrative. It’s one of those places where you could see the left and right criss-cross.

Are there ways that Carson stands out from the tradition of black conservatives?

The different things he’s willing to pull from that seem to be all over the political spectrum. Not particularly in line with what we’d think of as a conservative position.

Could you give us an example or two?

I think it might be statements around education. He’s just talking in a different language compared to the Tea Party right, or any constituency inside the Republican party, as best I can tell.

Who knows what his position actually is on foreign relations or military involvement? On the key registers where you say, “Here’s how he lines up,” he just doesn’t.

He didn’t come up through politics, so a lot of his views seem anomalous compared to other politicians.

Part of it seems idiosyncratic, and part of it is just incomprehensible. There’s an exchange between him and George Stephanopolous, and it just goes nowhere, because he can’t get an actual answer.

How widespread do you think his support is among black voters? I’m aware that that group is not a monolith.

I don’t think the support is very widespread or very deep. I think there’s interest in a credible black candidate within the Republican party. There’s certainly sympathy around issues of abortion, sexual morality – it’s a very conservative part of the American electorate, especially on religious grounds.

But there’s been almost no attempt to reach out – the rap thing not withstanding. There’s no strategy with which to reach out to black voters… If you look at who’s on his staff, there doesn’t seem to be anyone with any capacity to understand, finally, what it means for a candidate on the right to be able to make those inroads into black communities.

How does black conservatism tend to vary from its white equivalent?

There are different variants around black conservatism. One variant comes up through a black nationalist route – an almost Garveyite expression, that the community needs to bind together… Especially to be competitive in the free market. It’s a communal understanding. So you have to mobilize some notion of race. Racism tends to be downplayed, but race becomes a positive, organizing thing.

The other side tends to be much more individualistic, embraces an ideology of the free market through a kind of race-less individualism, where thinking about race is [considered] precisely the problem.

Where he sits in that is really kind of interesting. It doesn’t seem to me he’s been “We need to be post-race.” He’s mobilizing a racial identity that he doesn’t want to reject or shove to the side. But he’s not making a nationalist appeal either. He’s in really interesting territory with regards to race – he doesn’t feel the need to go any of the routes that have organized black conservatism.

And he doesn’t often make his race explicit.

Do you see any historical parallels to Carson – does he remind you of anyone?

He doesn’t. Even now that we have some pretty developed models for how to be a black Republican, he’s looking for different kinds of alternatives. It’s because he’s not schooled in politics. It’s kind of refreshing. And a [presidential] candidate has not been able to do that.

Either a candidate plays a firm role that the parties want them to play – whether it’s the Democrats or the Republicans – or you’re not gonna be invited into the arena. The right has not traditionally wanted black conservatives who are all over the map – they’re there to play a role, and if you deviate from it, they’re going to dump you.